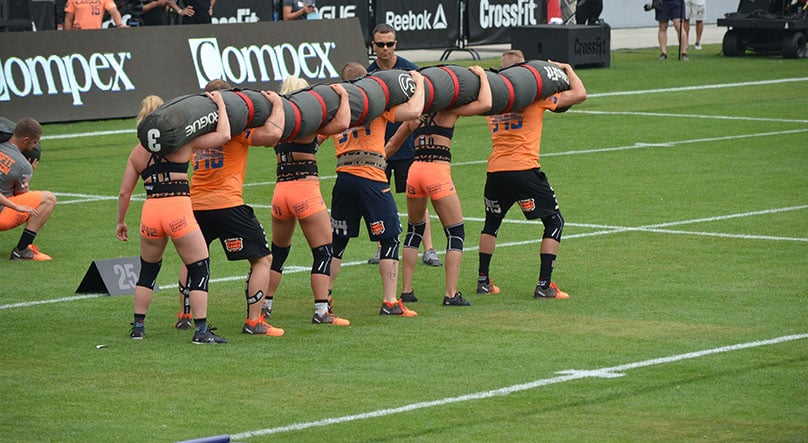 Competing on a team, training with your swolemate or a new friend at the box is completely different that training or competing as an individual. What makes you successful as a teammate versus as an individual can be very different.

Is present
Being present doesn’t simply mean showing up for the workout then going home. A present teammate is one that watches their partner(s) move and train. Doing so helps catch flaws in technique that your teammate may not even be aware of (their dip is not vertical in the push press, pull too early in the clean or snatch, etc). In the midst of a competition, picking up on a teammate’s mechanical flaws—and helping them become aware of it—can make a huge difference in their efficiency of movement, and possibly even your overall score in the workout.

Is invested in their partner’s success
Imagine this: you’re training with your team before a big competition. It’s back squat day, and you’re working up to break a plateau and hit a new one-rep-max—a goal you’ve had for some time now. Lo and behold, you hit a PR! You turn to celebrate with your team and…they merely give you a nod of approval—or they missed it all-together because they were texting or chatting with someone else. WTF?!? Honestly, who the heck would want to be a part of that team? Real teammates are almost as invested in the success of their team as they are their own. They’ll cheer, hug and celebrate any accomplishment, no matter how small, because they know what it means to their fellow athletes. This is how you forge strong team chemistry and a winning mentality.

Motivates and inspires
Probably the most obvious component—and arguably most important—aspect of being a great teammate is the ability to motivate and inspire. This can take multiple forms. Obviously, one can motivate an athlete by what they say to them, be it in training or competition. The best teammates know the specific phrases that trigger higher levels of performance from their partners, and they know exactly the right moment to deliver a bit of verbal encouragement. Moreover, they can motivate and encourage their teammates to put in just a little bit of extra work at the end of a hard training session. Whether that’s through extra mobility work or refining their lifting technique, a great teammate can get others to tap into an extra source of energy. And sometimes that motivation doesn’t come from words but through actions. Pushing through a mental barrier and collapsing at the end of a workout, with the obvious fact that you’ve given everything you have for the success of a team, inspires those around you to match your effort. All of a sudden, your teammates will realize that they don’t want to be the one to let the team down. Moreover, it’s the work ethic, attitude and the commitment you display to becoming a better athlete that trickles down the line. Sticking to a diet, staying after class to practice a weakness, maintaining a positive attitude through thick and thin—that kind of behavior is infectious and is an excellent source of motivation for others to follow.

Is selfless
It can be hard for some people to take a back seat and admit they struggle in certain workouts or movements, but the good teammates will put the success of the team ahead of themselves. There’s no point in trying to show how hard you work yet struggle heavily through a workout that’s clearly not in your wheelhouse. Your teammates will be peeved that you weren’t humble enough to hand duties over to a more capable athlete—no-one wins in that situation.

Steps up to the plate
Yes, a good teammate is humble—but they also know when it’s their time to carry the workload and shine for the team. When that one workout or movement comes up that you know you can dominate, don’t shy away from your responsibilities. Let your team know, “guys, we’re going to be ok. I got this.” And proceed to show them why that’s the case.

Is calm
Great teammates don’t panic when things don’t go smoothly in competition—especially if one member of the squad is struggling in their portion of an event and the team is falling behind. The last thing that an athlete wants is to have someone screaming in their ear telling them that things are going to shit. Once again, a good teammate will know exactly what to say to get them moving quicker—but only those people with a cool head will instill confidence in those around them when it’s crunch time.

Sympathizes
Inevitably, there will be days when things don’t go according to plan—there’s a missed lift, too many failed reps, or just a poor day in training. It’s part and parcel of doing CrossFit. But the people who are able to understand that bad days will happen—and sympathize with a teammate who is going through one—are the athletes that make great teammates. It can’t always be sunshine and rainbows, but what makes the rough days manageable is being able to lean on the support that a good teammate provides so that we can come back and make the next day a success.

Keeps their teammates honest
But there is a big difference between having an off-day and simply not putting in the right amount of effort. It’s the responsibility of an athlete to be honest with their teammates. When someone has a great day of training (like that big back squat PR), they let them know what a big deal that is. Conversely, when someone is being lazy and not busting a gut to pick the barbell up off the ground, a good athlete will let them know what a big deal that is too—for the wrong reasons. Obviously each person is different—some people might respond better to an aggressive dressing-down, while others need a calm but firm word in there ear to pick up the slack. But if you’re never honest with your teammates, then your praise will seem less genuine and your advice will seem less prudent.

Is a teacher
This doesn’t mean you have to be the best athlete on the team, but, as a good teammate, you should find new drills, meal plans, and articles to share with your squad that will help everyone perform better. After all, knowledge is power, so when you watch a YouTube clip on progressions for a muscle-up or read a BoxLife article on squat programs, share that information with your team.

Is a friend
A good teammate provides a support system to the athletes around him or her, and that extends beyond the confines of CrossFit. There’s more than one way to build team chemistry, and that means taking a vested interest in the things that people have got going on in their lives—the good, the bad and the mundane. You want to be able to build experiences with your teammates in different situations and understand the type of people you work out with because when times get tough in the workout, you know that they’ll have your back—just as you’ll have theirs. So grab dinner together, get a beer, hang out outside of the gym, and build a friendship with your team.