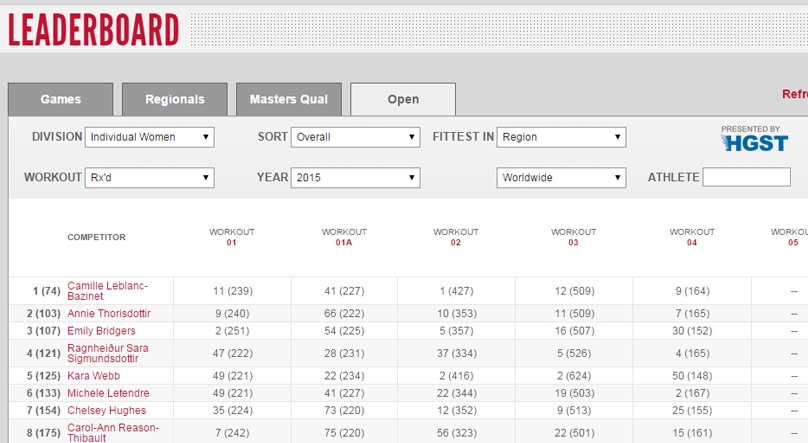 1. Annie Thorisdottir is back
Iceland Annie made her competitive return to CrossFit last year after injuring her back during the 2013 season, removing her from contention to compete at the Games. Demonstrating her capabilities as an elite athlete, the 25-year-old Thorisdottir finished 2nd at the 2014 Games, and also competed for Team Europe during the CrossFit Invitational. Based on her performances in the Open leading up to the fifth and final workout, it’s safe to say that Thorisdottir is well and truly back. She currently sits in second place overall (first in Europe) with 103 points, 29 points behind Camille Leblanc-Bazinet in first. However, Thorisdottir has beaten the reigning Games champ in three out of the five workouts (15.1a counts as a workout!), setting up an intriguing encounter when the two athletes—joined by Sam Briggs—go head-to-head at the live announcement of 15.5 this Thursday.

2. Josh Bridges learns from his mistakes
Anyone who watched the live announcement of 15.4 may have been surprised to see the three-time Games competitor and bodyweight specialist struggle so mightily on the handstand push-ups. Of course, the new standards for the movement (which meant having to clear the ‘foot line’) threw a lot of people off. Bridges was visibly upset with his initial score of 122 reps. During the live announcement’s Cool Down Show, Bridges said he was going to give 15.4 a second attempt over the weekend. Much like many other athletes during this Open season, the 31-year-old went away, did his homework, learned from his mistakes during the live announcement and posted a second score of 167 reps—a 45 rep improvement that was good for the 4th best score worldwide. It just goes to show that sometimes there is great value in redoing a workout.

3. Highlighting the teens who may compete at the Games
Last week, Dave Castro announced that for the first time ever, there would be a Teen competition at the Games. The details still have to be ironed out, but given this major news, we felt it was only right that we highlight the top performers in the four Teen divisions so far.

4. A close race for 1st
The top 3 men—Mat Fraser, Rich Froning and Ben Smith—are currently separated by 46 points. Jason Khalipa, who is also a podium finisher at the Games, is currently 50 points behind Smith in fourth. On the women’s side, only 33 points separates Emily Bridgers in 3rd from Bazinet in 1st. Since the current top 3 athletes in both the Men’s and Women’s divisions are podium finishers, it’s no surprise that the race for the race for the overall Open victory is coming right down to the wire.

5. International women making their mark
We mentioned this fact in an earlier review of the leaderboard, but it’s worth repeating now. Leading in to the fifth and final workout of the 2015 Open, seven of the top 10 women are international. Only Emily Bridgers (2nd) and Stacie Tovar (10th) are flying the flag for the U.S. On the men’s side, it’s the complete opposite. The only international athlete is Rasmus Andersen, and even he is competing out of the Southern California region (he is a member of Team Invictus). In fact, you have to go all the way down to 16th to find the first male athlete competing in an international region—Steven Fawcett out of Europe. The discrepancy between the male and female international athletes is fascinating, and something to keep our eyes on leading up to the 2015 CrossFit Games.