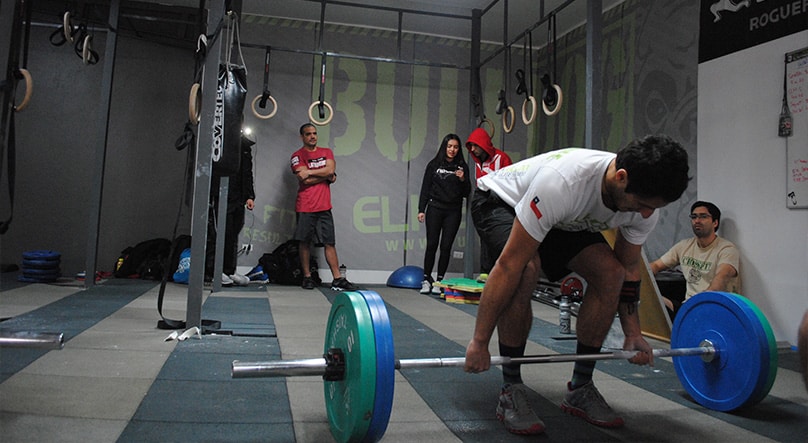 Dave Castro (Director of the CrossFit Games) announced the details of the fourth workout of the 2016 Open on Thursday night, and to the surprise of many (including us), it isn’t a repeat. Speaking from Schriever Air Force Base in Colorado Springs, CO, Castro revealed that 16.4 is a chipper—and what a chipper it is:

Workout 16.4
Complete as many rounds and reps as possible in 13 minutes of:
55 deadlifts
55 wall-ball shots
55-calorie row
55 handstand push-ups

Notes
Prior to starting this workout each athlete will need to stand against the wall and measure and mark their foot line for the handstand push-ups. As was the case for 15.4 during last year’s Open, athletes must perform handstand push-ups with their heels starting and finishing above the pre-marked line. For more information, visit our guide on setting up the tape.

Complete as many rounds and reps as possible in 13 minutes of:
55 deadlifts
55 wall-ball shots
55-calorie row
55 hand release push-ups

Davidsdottir vs Sigmundsdottir
16.4 was a battle between two Icelanders and the 1st and 3rd place finishers at the 2015 Games in Davidsdottir and Sigmundsdottir. But 16.4 was made even more special by CrossFit’s emphasis on honoring the military; three airmen that had qualified from an internal competition on base stepped up to compete alongside the ‘Dottirs. Those three airmen were:

Once the workout kicked off, it was clear that pacing and strategy were going to be key. Sigmundsdottir broke first on her set of 55 deadlifts, dropping the bar at 13 reps, while Davidsdottir broke at 14. Each athlete took a couple of seconds to rest before their hands were back on the barbells. Sigmundsdottir got back to work a little quicker than her rival on each set of deadlifts, which allowed her to complete the 55 reps at the 1:35 mark, while Davidsdottir joined her on the wall balls at the 1:50 mark. Incredibly, Sigmundsdottir almost completed her set of wall balls unbroken, but a missed rep on her final attempt meant she had to pick the ball up one more time. Even so, she was able to extend her lead on Davidsdottir to 6 reps and roughly 20 seconds as she strapped into the rower at the 3:38 mark. During the row, Sigmundsdottir was able to create some breathing space between her and Davidsdottir as she extended her lead to 14, moving on to the handstand push-ups at the 7:10 mark. Without pausing for a break, Sigmundsdottir launched herself upside down and began cranking out handstand push-ups at a frantic pace. Was her 3rd place finish at the Games last year weighing on her mind? Who knows. What was clearly evident was that at this point, Sigmundsdottir had no intentions of relinquishing her lead, even as Davidsdottir joined her in the handstand push-ups at the 8:02 mark. Yet as both athletes started to fatigue, ensuring that their heels cleared the pre-marked line proved to become a more arduous task, with both picking up multiple no-reps. Even so, Sigmundsdottir managed to finish all 220 reps of the first round and return to the deadlifts at the 10:09 mark. With less than three minutes remaining in the workout, all the athletes on show made one final push to get as much work done as possible, with Davidsdottir returning to the deadlifts and the airmen fighting with the calorie row.

16.4 Tips
Break sets accordingly to avoid extended breaks
There’s a lot of work to be done here, and many people will find themselves resting on the handstand push-ups (if they get there) as it’s the most challenging movement of the bunch. So don’t go blazing saddles straight out of the gate only to find yourself burning 30 seconds each time you drop the wall ball later on in the workout. Go in with a strategy of how you’re going to break up the deadlifts and wall balls that will allow you to move the quickest and rest the least, but adjust as needed as the workout progresses.

Keep a tight midline on the deadlifts!
The weight for the deadlifts is moderate (to heavy), but 55 reps is a lot, so if you’re not careful your back is going to be smoked and the rest of the movements in the workout will be that much tougher. Make sure you squeeze your shoulder blades together and keep your abdomen tight, squeezing your glutes with each rep as you use your hips as a hinge to move the bar up and down.

No missed reps on the wall balls
Wall balls can be a bitch if you have to do more than you should because you don’t hit the target, you don’t break parallel, or both. Make sure each rep is good to avoid unnecessary work! In addition, once you release the ball into the air, bring your hands back to your chest in preparation for receiving the ball. This will save you some energy versus keeping your arms extended, and allow you some time to inhale some much needed O2. Check out more tips on the wall ball through our article.

Be efficient on the rower
Maintain a steady pace and don’t waste energy through poor technique and weak pulls. A general guideline is to drive the legs first, then pull with the arms as your bring the handle to your chest. On the return, extend your arms first, then bend the knees in. Try to fall into a rhythmic pattern that allows you to catch your breath somewhat, and try to keep the chain moving in a straight line. For more tips on good rowing technique, check out our article on the topic from rowing guru Shane Farmer.

Be ready for the handstand push-ups
Well before the start of the workout, do a couple of trial handstand push-ups to make sure you know where to put your hands so each rep feels good. Point your toes town to help raise your heel above the line! Utilize a big kip straight from rep 1, and grind away as best you can.