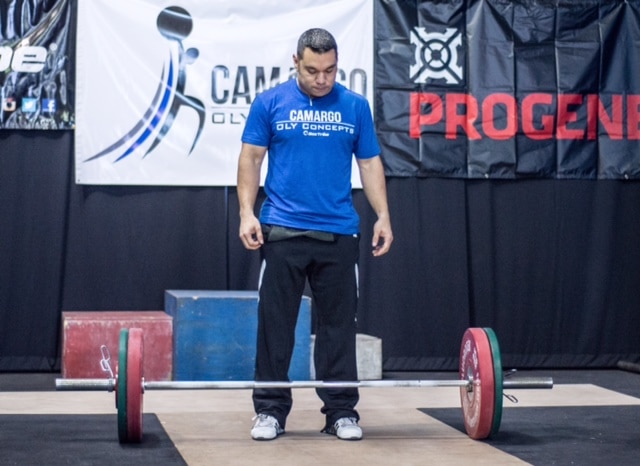 It’s not often that an athlete makes a competitive return to a sport after 18 years in retirement, but that’s exactly what Daniel Camargo, a 24-year veteran of Olympic Weightlifting, did this past week.

On March 5th, Camargo, one of only 14 Senior International USA Weightlifting coaches in the nation, competed at the Altamonte Open weightlifting competition. Camargo needed to amass a total of 215 kilos (574lbs) between his snatch and clean and jerk in order to qualify for the 2015 Masters World Championship, which will take place this September in Finland. For an athlete of Camargo’s experience and skill, that wasn’t a problem. The 37-year-old put up a total of 242kg to mark an emphatic return to competition.

Camargo first learned the Olympic lifts when he was 12 years old, and by the age of 16 he had developed into an elite Junior lifter. As a teen, Camargo received an invite to live and train at the United States Olympic Training Center in Colorado Springs. Camargo spent five hours a day training to make the Olympic team, and though he never made the cut, he did represent the U.S. in nine different international competitions over the course of four years.

While those numbers are certainly impressive—especially when you consider that Camargo only weighed 178lbs—they could have been even higher. However, despite being considered as an Olympic hopeful, Camargo made the decision to retire from competing when he was just 21.

“I was nine years into the sport when I made the decision to retire. My biological age was still very young, but I just got burnt out. I couldn’t go through that lifestyle anymore—I was exhausted,” says Camargo. “At that level of training, all the athletes—including those you see on the podium at the world’s biggest stages—live in this constant state of inflammation. I was not injured, but I was sore, I had aching joints, I felt sluggish and I was tired of it.”

Camargo says that had his Olympic coach offered him a month off from training to rest and recuperate, he would have gladly taken it. He might have even made the Olympic team. But sadly, that option was not given to him. A spot at the U.S. Training Center is highly coveted by hundreds of young weightlifters around the country, so if Camargo wanted to take a break, that was that. Someone else would take his place in an instant.

Even so, Camargo decided that enough was enough and left the platform. He then returned home to Florida, and spent a year soul searching, trying to find his next step in life. As it so happened, Camargo stopped by his local high school where he had developed as a lifter to say hello to his old coach.

“When I stopped by to say hello to my old coach, he was in the middle of coaching some young up-and-coming kids. I had no idea who they were, but they knew me,” says Camargo. “As I was engaging with my coach, some of the kids started speaking to me and asking for my advice. That advice became a little technical, and before I knew it my coach was allowing me to work with these kids for an hour. The next day I came back, and that was it. It was 1999, and I realized that coaching could become a full-time profession for me.”

Camargo earned his L1 weightlifting coaching certification in 2000, which was quickly followed by an L2 cert in 2002. By 2006, he received his L3, which enabled Camargo to start getting jobs as an assistant coach to the U.S. National team. In 2008, he received his L4, and started to get head coaching jobs, leading U.S. teams in competition. Then, in 2014, Camargo reached the highest level of coaching in USA Weightlifting by becoming a U.S. Senior International Coach. It’s Camargo’s goal to one day be selected on the coaching staff for a U.S. Olympic team, and if he keeps amassing international coaching experience and producing elite lifters, that goal could become a reality as soon as next year, when the 2016 Olympics will be held in Rio de Janeiro, Brazil. In fact, last year Camargo was on the coaching staff for the Junior World Championships, where Games athlete Lauren Fisher finished 10th in the 63kg (138.6lb) weight class.

But in recent years, Camargo started receiving peer pressure to throw his weightlifting singlet back on and compete as an athlete himself. “Since I started coaching, I have been told that I should try and compete again, and I didn’t because I feel that if I’m going to coach and be a coach, I need to devote my full attention and effort to that,” says Camargo. “I work out now, and I have maintained a good level of fitness through CrossFit and a good level of strength because I lift as well, but all of it is for personal satisfaction and health. But there are days that I have to coach and focus on my athletes, and I have to miss my own training sessions. And that’s what’s kept me from competing for so long.”

So why does Camargo now feel that the time is right to come out of retirement?

“In the last couple of months, the Masters community [athletes who are 35 and above] has grown significantly, and my athletes have been giving me a hard time, telling me that I should come back and compete,” Camargo says. “When I ask them, ‘Why should I lift?’ they say, ‘Just do it for fun!’ Well I’m like, ‘Screw fun! I’m already having fun as a coach!’”

However, for Mattie Rogers, a Team USA member, international competitor and one of Camargo’s elite athletes, that wasn’t a good enough answer. “Mattie has been instrumental as the ringleader of this campaign in my gym to have me come back. So I finally decided to come back for two reasons. Firstly, to inspire and encourage more people to compete and to send a message to the Masters community that it’s never too late to compete. The second reason I’ve chosen to come out of retirement is to help bring exposure to the sport itself.”

Camargo let the American weightlifting community know that he was well and truly back by hitting a 110kg (242lb) snatch and a 132kg (290lb) clean and jerk during last week’s Altamonte Open, finishing with a total of 242kg (533lbs). While the qualification requirement to compete at the Masters World Championships was only 215kg, Camargo wanted to post a higher total to improve his pre-competition ranking heading into the event this September.

So, what’s next for Camargo? Will he be competing at any other meets ahead of the World Championships?

After 18 years in retirement, Camargo now says that competing ‘doesn’t feel like it used to.’

“Not only is my body older, but I am in a completely different place spiritually then I was when I retired as a younger athlete. It feels better than it did when I was retiring. It feels great.”

With plans of medaling at the Championships this September, Camargo also hopes to send a positive message to the Masters community that it’s never too late to compete.