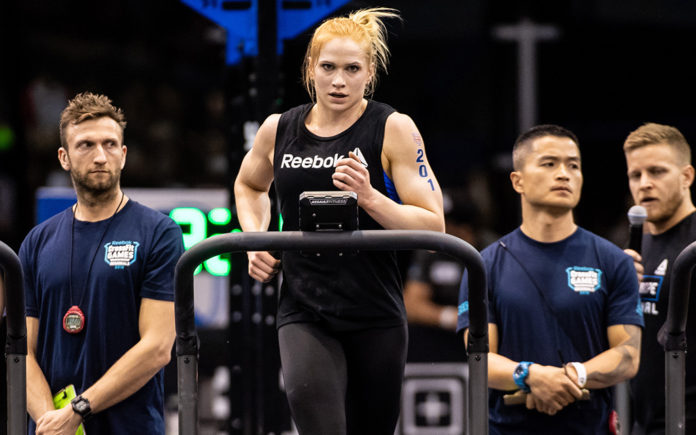 CrossFit’s first sanctioned event of the 2019 season will kick off without one of its veterans. Annie Thorisdottir announced her withdrawal from the Dubai CrossFit Championship yesterday in an Instagram post. (https://www.instagram.com/p/BrDiSRBnhpR/)

“It breaks my heart but unfortunately I won’t be able to compete this year. I got the opportunity to have the surgery/threading done for my heart arrhythmia and felt like I had to go for it for a more successful season. It was supposed to be one week but unfortunately it’s now been 10 days and it is just taking a little longer to heal up.

Thorisdottir first mentioned her heart arrhythmia, an abnormal heartbeat rhythm, during the 2018 Games after the Chaos event. She announced she had a testing procedure done at the end of November for the condition, but was unsure about proceeding with surgery to fix the issue.

Absolutely LOVED that event!! I was so happy when I finished the pistols and got to the box at that point I knew the workout was mine! I’ve been hoping for those high box jumps 🔥 But then something I’ve had to manage since I was a teenager , a heart arrhythmia, set in on box jump number 5 – this happens in training maybe 3-4 times through the year and I have not wanted to get a surgery done – this has never happened during competition, but today it did. It’s scary when you’re no longer in control and with this many fit ladies around me, resting didn’t seem like an option. I think it might have been the impact from the box jumps that caused it, and two more episodes happened before finishing my 25th rep. Sometimes things don’t go the way you’d want them to but only thing you can control is how you react to it. Tonight will be LIT 🔥

Heart arrhythmias can often be fixed through a procedure known as an ablation where doctors thread electrode catheters through a blood vessel in the groin to the heart. They then use electrical impulses to kill the abnormal heart tissue causing the arrhythmia. Patients typically can resume normal activity the next day – but most patients are likely not elite CrossFit athletes.

Thorisdottir, who won the 2017 Dubai Fitness Championship, stressed that she would still be coming to Dubai – just on the sidelines this time.

We’re sad to see the CrossFit veteran miss out on the first sanctioned event of the season, but wish her all the best in regards to her health.