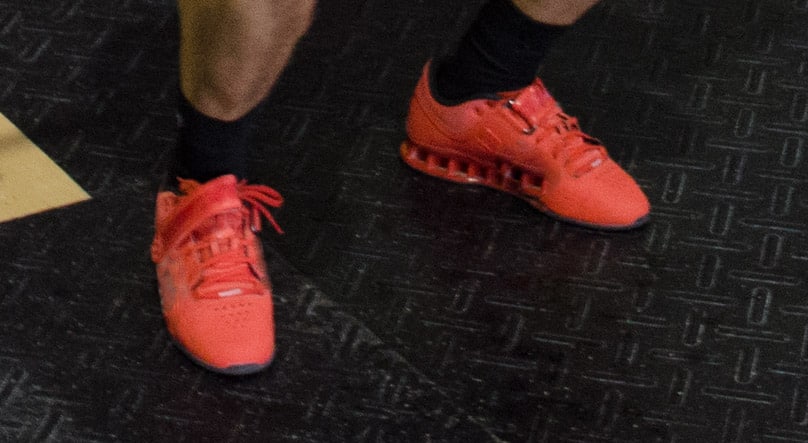 Traditional power lifting (such as squats and deadlifts) and Olympic Weightlifting (snatch, cleans etc) movements are a staple of the CrossFit programming ideology. They are essential strength and power components that we constantly rely upon, in the gym and in everyday life. Moreover, they’re quite fun-who doesn’t love the feeling of PRing a major lift, seeing the bar bend and hearing the heavy plates crash to the floor? Naturally, we seek to gain every advantage we can in the never-ending pursuit of weightlifting perfection and progress. Mobility, diet and of course practice all come into play. You may notice that I have left one factor out of this list, and that is because up until recently, I didn’t think that there was a single flaw to be found with it. However, it’s time to consider whether or not your use of Olympic weightlifting shoes is acting as a crutch on your progression.

Surprised to hear that? So was I. Personally, I have had an unhealthy love obsession with my OLYs for quite some time now. Prior to my acquisition of the shoes, any movement that involved getting below parallel in the squat meant that my balance would crumble, my back would arch and my knees would cave. I’m not saying that the OLYs fixed all of that, but they certainly helped. Listen, you don’t have to tell me about the great benefits that OLYs provide-a stable surface, great for ankles (and hips) lacking in mobility, they can even be versatile enough to include in a WOD featuring non-lifting movements! But, there is a question that I think a lot of CrossFitters (especially those who use OLYs for every major lift-regardless of the weight/rep scheme) need to ask themselves: Are your OLYs giving you a false sense of security?

Let me explain why I ask this question. You may remember that in 2012, Matt Chan suffered a bilaterally torn meniscus, an injury he attributed to his knees being pitched too far forward in his lifts because of “excessive dorsiflexion and Olympic Weightlifting shoes”.  Now, OLY shoes have a raised heel designed to increase the ankles’ range of motion. Chan feels that this was in fact a detriment that meant his ankle was pitching to far down, meaning that his shins were coming over his toes which he felt led to his injury. During his recovery process, Chan stressed the importance of focusing on proper mechanics and positioning, elements that can often be forgotten if one has too much reliance on a tool that can mask the importance of proper form.

Chan’s injury and discussion of OLY shoes masking proper form led to others posing the same question online. Jared Van Anne, a CrossFit athlete and owner of the Health and Performance Center in Saint Louis, Missouri, posted a video online debating the use of OLY shoes in training. Van Anne makes the interesting analogy of football and baseball players using cleats. He says that the shoes they wear don’t make them a better athlete, but rather allow them to express their athleticism slightly more.

“It’s the same thing with the Olympic Lifting shoe. It’s not something that makes us better technically, it might help guide us into better positions, but on the same token if we don’t have a high level of intensity to maintaining our technique with our loads, it can afford us the availability to be in vulnerable situations” -Jared Van Anne

Van Anne goes on to explain that the OLYs should only be used for those heavy loads (85% of 1RM or higher). For moderate to light loads, athletes should utilize minimalist shoes to develop their awareness of their range of motion. By doing so, athletes can then practice and develop proper technique without the need of OLY shoes. When the time comes to significantly increase the load, the OLYs can be utilized to express an athlete’s strength a little better, thanks to the previous focus on technique and form in an “unenhanced” state.

This may be a topic that some (or all) of you don’t agree with, but we should always seek to educate ourselves in order to enhance our performance and risk the chance of injury in doing so. You never know, taking the time to utilize your Nanos (or another minimalist shoe) may result in a huge PR the next time you switch back to your OLYs.