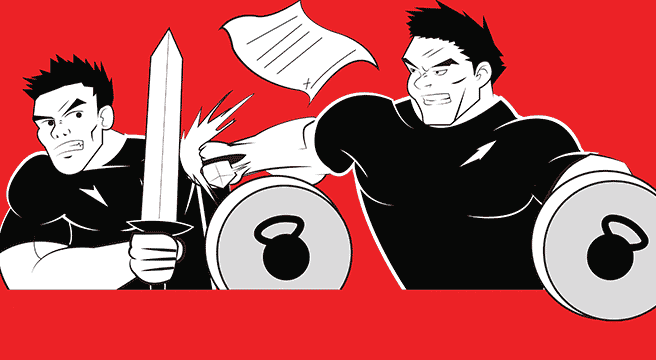 The Story of CrossFit Key Biscayne
By Nestor Perez

I arrived at the coffee house at 2:00pm. After looking around, I spotted a fit, well dressed guy about my age, on the phone. As I approached him, we both knew who the other was. We introduced ourselves and got down to business. Across from me sat a man who I felt was not up to the task of opening a CrossFit box, in “my” neck of the woods, Key Biscayne, FL.

Alex Cruz owned the domain name “crossfitkeybiscayne.com” and I wanted it. I needed it. In fact, just a week before our meeting, CrossFit HQ approved my application for an aptly named affiliate and I felt using a .net handle was not in my best interest. Problem was, Alex had just submitted an affiliate application and had no interest of relinquishing the domain name. Worse yet, he had also signed a Letter of Intent with a commercial property owner in Key Biscayne. I told Alex that even if he was approved for an affiliate, he would not be able to use the .com name that I was entitled to use.

To my dismay, that did not faze him. I considered contacting CrossFit HQ to pressure Alex, but I figured we were reasonable adults, and I could do my own bidding without having to go crying to CrossFit HQ over a domain name. Alex assured me he had an offer on the only spot in Key Biscayne suitable for a box. I countered by telling him I had a spot as well and that I would not relent. We threw around the possibility of a partnership, but I was already committed to two other partners, both Key Biscayne residents and Alex did not want to own ¼ of a box. I advised him to consider relocating elsewhere in the county, and cordially, we parted ways.

As it turns out, Alex and I were hardly each other’s only problem. There were rumors of other parties interested in opening a box on the island, including two successful affiliate owners. Feeling the competitive pressure, I moved forward with my plans to set up shop in an old, semi-abandoned building by placing a Letter of Intent with its owner. A week later, the property owner advised me that several national retailers were also interested in the lot, and as such, the building would be demolished within 5-8 months to make way for a new commercial development.I was devastated. I spent the following day searching the entire island for a spot that I was sure either did not exist, or that I could not afford.

After a day of scouring sites on the island, I got a phone call from a familiar number. It was Alex Cruz. He cut right to the chase and suggested I partner with him rather than fight him for the same real estate. Although I had no intention of dumping my partners, I was intrigued by the proposal and the brashness of his approach. We met an hour later. The location Alex secured was in fact a great spot. I was troubled by the high price but had enough faith in the market to partner with Alex, a man I did not know, pending a discussion with my partners. After several meetings and discussions, neither of my partners thought the new site was reasonably priced and decided to back out of the project. As crazy as it seems, two total strangers were now business partners.

All Alex and I had in common at that time was the desire to open a box in Key Biscayne and 3 Facebook friends. Eventually, we would come to realize that we had a few more things in common: we both envisioned a box for Key Biscayne that emphasized endurance training. Triathletes regularly train and compete in Key Biscayne and the island also houses some of the more competitive teams and athletes on the local scene. We also liked the same colors for the box. It was at least a beginning…

As Alex and I got to know each other, we continued our plan to bring CrossFit to Key Biscayne. Our first set back as partners came when we learned that a higher offer had knocked our offer out of contention for the site we had our hopes on. Reluctant to raise the offer on an already exorbitantly priced conveyance, we began to look elsewhere.
Finding a good location to open a box is taxing and frustrating. There is no industrial property in Key Biscayne. We approached the owners of several shopping centers with no luck. Everything was too small, too expensive, protected by a non-compete clause or not zoned properly. Unexpectedly, a corner space in an obscure mall next to where Key Biscayne’s first gym had existed nearly a decade before was brought to my attention. Initially, I was informed by the Village that the property was not zoned for our purpose but a local realtor assured us that the Village would consider permitting us if we gave him an opportunity to lobby the zoning authorities on our behalf.

Upon approval of use for the site by the municipal authorities, we excitedly moved forward by purchasing some equipment, engaging a General Contractor, securing insurance, state Health Studio licensing, and the various permits required by the county and Village authorities. Feeling that I still had somewhat of a fiduciary duty to my former partners, I reached out to gauge their interest in joining Alex and me on the new, more reasonably priced site. While one of them declined, the other partner joined us. Our initial target for opening the box was the week of January 2, 2012. Plans were approved and demolition of the site started in earnest. We were working with very tight deadlines and were trying to complete the project and get it approved by the Village of Key Biscayne in the middle of the holiday season.

A week into the demolition, we encountered an obstacle that would surely delay the build-out. We found six steel columns anchored to the ground, holding two I-beams that were welded creating one large, heavy structure. Alex quickly realized that this was a blessing in disguise. With the help of our contractor, we hired a welder that made pull-up bars and welded them to the existing structure. A major demolition had been averted. Regrettably, the Fire Department of Key Biscayne did not share our enthusiasm and entrepreneurial spirit, and subsequently failed us on small technicalities. Apparently, everyone fails their first fire inspection. Eventually we overcame these setbacks and agreed to open a week after we’d hoped. Again luck would not be on our side as on the Saturday prior to our scheduled soft opening, the partner that had agreed to join Alex and me 6 weeks earlier pulled out of the deal leaving us with a major gap in funding and no programming. With our team down to two, and most of the work already done, Alex and I decided to move forward as a pair, and set a firm date of January 21st, 2012 as our opening date.

Opening a CrossFit Box was an experience that will sit high atop my list of accomplishments. It took lots of work and hair pulling, but it’s definitely been worth it. On January 21st, CrossFit Key Biscayne opened successfully with 10 members (8 rookies, 2 transfers). We remain grateful to those who inspired us in our quest and helped us achieve our goal as entrepreneurs and Affiliate owners.