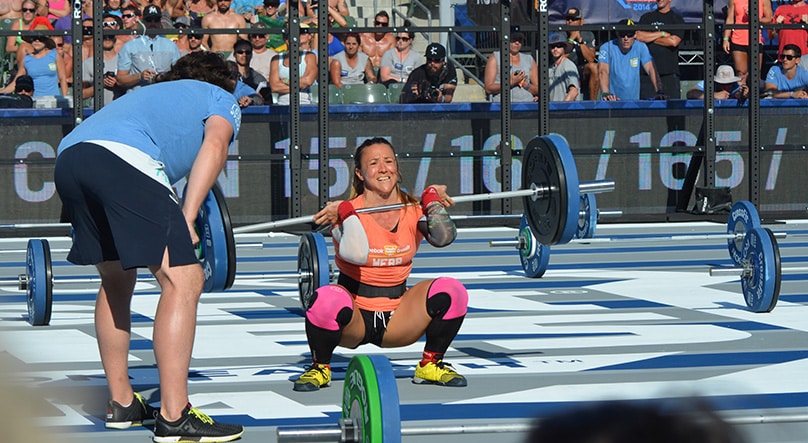 In case you missed it, let’s catch you up on what’s going on around the CrossFit community:

October 15th—CrossFit founder and CEO Greg Glassman releases statement on Kevin Ogar and OC Throwdown
We all remember the tragic incident at the OC Throwdown (OCT) back in January, when Kevin Ogar suffered a major spinal injury during a snatch event, separating his T11/12 and has severed his spinal cord. Since that time the CrossFit community has rallied around Ogar to support him with his medical costs, and now Glassman himself has come out with a statement regarding Ogar’s injury and the role of CrossFit, Inc in the situation:

“I have held off from publicly posting about Kevin Ogar and the OCT for a while. Kevin and I were promised a copy of videotape of the event and waited, prepared to pay for a video analysis and reconstruction expert. Whatever lessons there were to be learned, I wanted to share with our community. We had nothing to do with the event, yet Kevin’s injury is consistently attributed to CrossFit, Inc. Our position is that whatever happened, both sponsors and OCT have an obligation to take care of the athletes who participate. HQ has and will continue to stand with Kevin and help him. Those running the OCT should do the same. It’s the right thing to do.”
—Greg Glassman, CrossFit Inc. Founder and CEO

October 18th—Three Wise Men tribute event aboard the USS Midway
On October 18th, the Three Wise Men Foundation held a tribute event on the deck of the USS Midway in San Diego to honor and raise awareness for military combat veterans that have returned home from active duty but are still struggling with surviving the peace—the suicide rate of veterans returning home from war is more than double the rate of civilian suicides. The USS Midway event was the first in the campaign of the Three Wise Men Foundation, which will seek to launch a national movement to bring communities together on Veterans Day (November 11th) to honor those who survived their combat experience but have come home and are struggling.

The event consisted of three hero workouts (“Jeremy”, “Ben” and “Beau”)—three brothers in the military for which the foundation is named after—and they were performed on the deck of an aircraft carrier in the USS Midway, which is now a museum. The official sponsors of the event included Kill Cliff, Rogue and Nike, and the honorary competitors list was flush with some pretty big names from the world of CrossFit:

Ongoing: Nike vs. CrossFit City Place
Some news came out earlier this month that Nike, the global retail and marketing giant, is suing CrossFit City Place, an affiliate in West Palm Beach, FL for attempting to trademark its box logo as it is too similar to Nike’s “Jumpman” logo. Naturally, we decided to cover this as soon as we heard about it, because it struck us as a true David vs. Goliath battle. The logo of City Place’s box is gym owner Matt Brewster performing a one-arm handstand on a kettlebell, which, according to Nike is eerily similar to their Jumpman logo—which is Michael Jordan dunking a basketball, by the way.

Nike has filed an action against the gym with the U.S. Patent and Trademark Office because, per the Palm Beach Post:

“Nike says the CityPlace CrossFit logo will create confusion with the public, causing the sneaker maker “grave and irreparable damage.”

However, in spite of what will likely be an immense amount of pressure from Nike, Brewster says that they (CF City Place) won’t be intimidated, and will continue to use the logo as he sees fit. He says that he and the CF City Place community has received a ton of support from the wider affiliate community, and CrossFit HQ posted the news story to their own social media channels.

“There’s been numerous occasions where a small company like ours (his affiliate) has been approached by a much larger, much more powerful company that has a problem with something the smaller company is doing. It might be the logo, it might be the slogan, but the knee jerk reaction is to say, “Holy crap it’s Nike, we better just stop what we’re doing. But we’re not doing anything wrong, so we’re not going to cower to the larger company just because they said we should.”

November 9th—CrossFit Invitational
The CrossFit Invitational is the latest big-time event in our sport, and I for one can’t wait to see the four teams (Europe, U.S., Canada and Australia) square off against one another in San Jose on November 9th. Each team features some big-name athletes and there’s no saying as to who will take the competition, which will consist of “back-to-back events during a two-hour competition”, according to CrossFit HQ. However, what we do know are the details of the first workout, which were released on October 28th:

From the CrossFit Games website:
“The first announced events of the Invitational will be a 1-rep-max snatch, and a 1-rep-max clean and jerk. Teams will elect one man and one woman to compete in each lift. Their heaviest lifts will be combined to determine their overall event score.

For example, Canada could have Michele Letendre and Paul Tremblay snatch, and Camille Leblanc-Bazinet and Lucas Parker clean and jerk.

The competition will take place from on November 9th from 4-6 p.m. PT at the SAP Center in San Jose, CA. Gates will open early, and there will be a vendor village and activities for fans who want to throwdown, mingle or shop before the event. Ticket details will be released on Games.CrossFit.com.

Nike enters the functional fitness market
In 2014 Nike has been making a concerted effort to become more of a presence in the realm of functional fitness, which makes it all the more surprising that they are suing a CrossFit box over a logo (see above). Even so, Nike is now sponsoring the CrossFit Invictus team, has a new functional fitness shoe that Josh Bridges was sporting during the Team Series and Regionals, and have signed CrossFit athletes Kenneth Leverich and Alexandra LeChance (and Josh Bridges) to their team. In fact, you may have already seen Leverich on their website and in several of their ‘Pro Training’ marketing campaigns. With Nike entering the fray, does Reebok have something to worry about? Will Nike become the new title sponsors of the Games when Reebok’s contract runs out in 2021?