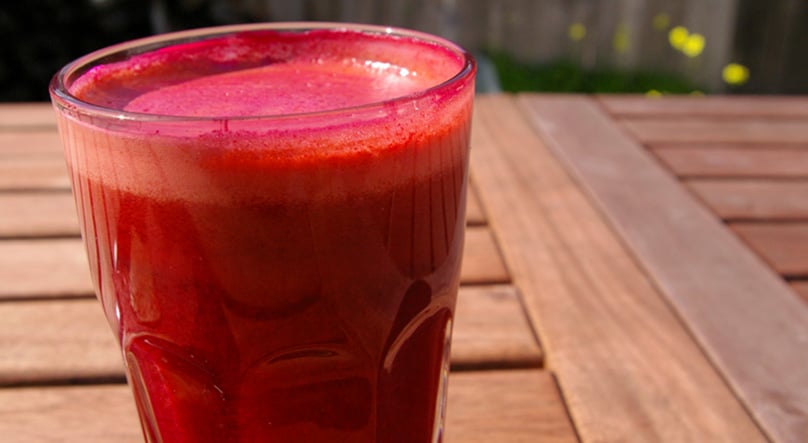 Beets, beets, beets. They stain your clothes and taste kind of funny. But over the past five years scientific research has shown that contained within the purple vegetable are some powerful benefits that can help boost your athletic performance, as well as your general health.

Beets, nitrates and athletic performance
Beets contain a high amount of inorganic nitrates, which is a natural chemical found in the air, soil and water. According to Science Daily, “the amount of nitrate in one 70-milliliter bottle of beetroot juice is about the same amount found in 100 grams of spinach.” Ok, so what’s so great about nitrates? To help me explain that, I’ll bring in the assistance of Scott Ferguson, a doctoral student at Kansas State University who, along with his two professors, conducted a study into the beneficial aspects of beetroot.

Per Science Daily:
“When consumed, nitrate is reduced in the mouth by bacteria into nitrite [another inorganic compound],” Ferguson said. “The nitrite is swallowed again and then reduced to nitric oxide, which is a potent vasodilator [a compound that opens blood vessels in the body]. The nitric oxide dilates the blood vessels, similar to turning on a water faucet, and allows blood to go where it needs to go.”

The process of nitrate becoming nitric oxide (and then acting as a vasodilator) is still unclear, but scientists believe that when dietary nitrate turns into nitric oxide in the body, it reduces the amount of oxygen required to perform exercise. Ahh, now I’ve got your attention. While our bodies naturally produce nitric oxide, we can dramatically increase its availability by eating nitrate rich food. By helping to facilitate the widening of blood vessels, nitric oxide helps to promote increased blood flow in our skeletal muscle (meaning that more nutrients like oxygen can be moved around the body) and regulate blood pressure. Based on their research, the scientists at Kansas State found that beetroot consumption can result in a 38 percent higher blood flow to the skeletal muscles.

So how does this impact your athletic performance? Well with wider blood vessels comes better distribution of nutrients—especially oxygen. With more oxygen flowing to our muscles, our time to fatigue in exercise is lengthened, which means we can move more weight or run/row/double-under for longer until our muscles force us to stop to take a rest. For additional proof of the athletic impact of beet juice, consider this study from the University of Exeter, published in the Journal of Applied Physiology. The study involved 10 male cyclists that consumed half a liter (500ml) of beet juice (approx. 2 cups), containing nearly 700 mg of naturally occurring nitrate, for six days, or a placebo of 500 ml of black currant cordial containing very minimal nitrates for the same amount of time (the description on the study’s abstract is a bit hazy and doesn’t specify how many of the 10 cyclists were on placebo and how many took the beet juice).

Anne Guzman provides a good summary as to how the test proceeded on Active.com:
“The cyclists completed a series of “stepped” moderate-intensity and severe-intensity exercise tests on a cycling ergometer during the last three days of this period. On the fourth day of supplementation, subjects completed two bouts of moderate cycling, while on days five and six the subjects completed one bout of moderate cycling and one bout of severe cycling. In the severe cycling test, the loading was increased by 30 watts per minute until the subject could no long continue. After this six-day period, subjects underwent a 10-day ‘washout’ period during which neither beetroot juice nor cordial were consumed, then the supplement protocol was reversed (those who had taken beetroot took cordial and vice-versa). Throughout this time, all subjects refrained from eating any high-nitrate foods to ensure that any differences were due to the beetroot juice.”

The results from the study showed that when using beet juice, athletes were able to cycle an average of 14 percent longer before failure, as well as having a lower resting blood pressure after consuming the beet juice compared to the placebo group.

The additional benefits of beet juice
In addition to improving athletic performance, research has shown that beetroot juice can help to reduce blood pressure, which is obviously relevant for heart failure patients, not to mention anyone suffering from high blood pressure. Furthermore, beets contain a phytonutrient called betalains that, in addition to giving beets their red/violet pigment, act as antioxidants and anti-inflammatory molecules in the body.

One last thing
As Chris Baddick of Training Peaks points out, it’s important to remember that the process of nitrates being converted into nitrites by bacteria in our saliva is crucial to reaping the benefits that beets provide. This process doesn’t happen immediately, so if you use mouthwash, gum or toothpaste right after drinking beet juice you may wash the nitrates out of your saliva. I’m not sure what would prompt you to drink beet juice and then brush your teeth, but just keep in mind that drinking beet juice slowly may increase the time nitrates are in contact with the bacteria in your saliva, increasing the conversion to nitrites.

Photo courtesy of freshtopia/CC BY SA 2.0