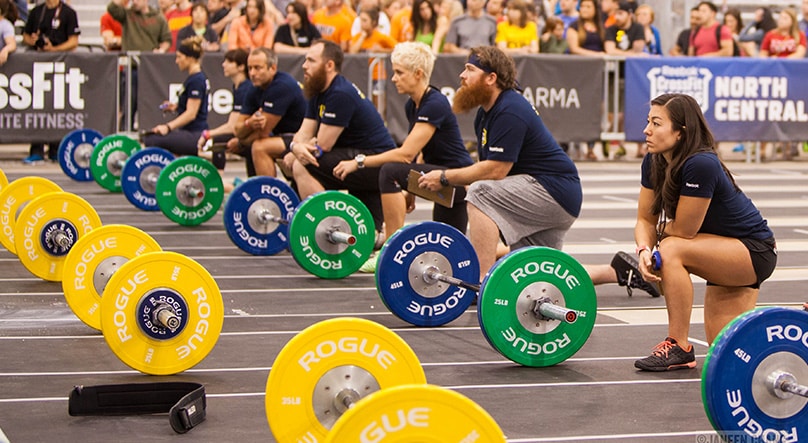 During the cool-down show following the 2014 CrossFit Invitational, Dave Castro (Director of the CrossFit Games) revealed some interesting changes to the format of the Open and Regionals that will be sure to excite and intrigue CrossFit fans and athletes across the world.

The Open will largely retain its traditional format, with the exception that a new Scaled division will be introduced in 2015. What this means is that athletes can sign up to compete in the RX division (performing the Open workouts as prescribed), OR the new Scaled division. However, if you had plans on progressing from the Open to Regionals,  we assume that you’ll still need to register and compete in the RX division. Castro didn’t go into detail as to how much the Scaled and RX workouts will differ from one another, but we would assume that weights will be different (lighter) and movements easier (instead of muscle-ups athletes will have to complete pull-ups, etc.). Furthermore, the Open will recognize (and presumably reward, though Castro didn’t allude to this) State and Country champions. Once again, there are no further details on this addition just yet, but we anticipate that your scores will be tallied against those in your State and Country to determine who the champion is.

The big shake up to the qualifying process for the CrossFit Games concerns the Regionals—or what was formerly known as the Regionals. As Castro explained during the cool down show, athletes that qualify from the qualifying rounds of the Open will enter into a ‘Super Regional’.

The Super Regionals (Castro says that this won’t be the official name of the competition in 2015, it’s just a placeholder for now) will work as follows:

-Asia and Australia are combined (though Castro says the ratio of qualifying athletes will favor Australia).

-Africa and Europe are combined (though Castro didn’t say this specifically, it’s safe to assume the ratio will favor Europe.

-As for the rest of the U.S. Regionals? “Some other Regionals in the States will be combined” – Dave Castro

-20 athletes will qualify from the NorCal Region in the Open.

-These 20 will compete against 20 athletes from the SoCal Region, creating a Super Regional of 40 athletes.

–  From these 40, five athletes will qualify for the CrossFit Games.

So why were these ‘Super Regionals’ created? If you refer back to our article in late July, we discussed how athletes that missed out on qualifying for the Games in stronger Regions were at a natural disadvantage based on their location, as some had higher scores than the winners of other Regionals that were heading to the Games. One way to circumvent this and qualify for the Games would be to move to a weaker Region, but Castro announced that there were going to be sweeping changes to the Regional qualifying process that would get the fittest athletes in the world to Carson.

“I’ve been happy with the results of the programming for the selection process that we’ve had over the previous few years, but we’re going to switch it up a little. It will be appropriate and it will bring the [fittest] people to the Games… It’s a global move. I want to get the fittest in the men’s finals. I want to get the best of the best in the men’s final and there’s a way we can do that, that we’re not quite doing right now. It can be better and we’re going to show you. We have a better version of what we’re doing now and it’ll get the fittest in the world here.”

“It will increase the excitement of Regionals. There will be really strong athletes competing in all heats.”
–Dave Castro, speaking on the cool-down show

But such big changes to the qualifying processes create a host of questions. Which remaining Regions will be combined into a Super Regional? How many athletes from each Region will go to a Super Regional? Castro listed the example of NorCal and SoCal that will take 20 athletes each, but will that be the case for every Region? What will the ratio of athletes be for Europe/Africa and Asia/Australia? Will five athletes qualify from every Super Regional to make the final CrossFit Games roster? Will the qualifying process change for Masters and/or Teams?

One thing is for sure—2015 will mark a new era in the history of the CrossFit Games, and it’s bound to be full of surprises.