Ah, the good ol’ strict pull-up. Nothing like having to elevate your entire body weight! Some people have no problem banging out strict pull-ups. However, a large population of CrossFitters see the word “pull-up” and are instantly defeated by what seems to be a mythical accomplishment.
Women in particular have a very difficult time conquering their first strict pull-up. Since the pull-up isn’t very technical, it’s mostly due to a lack of strength, not skill, that holds women back.

The Banded Pull-up Paradox
Most CrossFit boxes have no issues in allowing athletes to throw bands on the bar to use as an acceptable scaling for pull-ups. While this is OK for WODs, it doesn’t help much for developing pure pull-up strength. We all know that one person who has been using the same thick green band for the last two years. Heck, it might even be you. There are several problems with using bands:

Bands are elastic, therefore causing you to accelerate throughout the lift. There is very little resistance from the bottom half of the rep, but momentum is generated as you move up from the bottom. The end result is a very low amount of force production done by the muscles, so very little “strengthening” is actually happening.
Bands often lead to weird banded kipping pull-ups. They aren’t exactly kipping pull-ups, but some sort of hybrid child of the kipping pull-up that works. While this may be acceptable in WOD standards, it isn’t doing much to help you achieve a strict pull-up.

Often a band is either too easy or too hard, so strengthening the pull-up requires strength work outside of the regularly scheduled WOD.

Conquering the Pull-up
The pull-up requires a dedicated strength plan. Waiting for the word ‘pull-up’ to appear every once in a while on the whiteboard isn’t going to cut it. You need a dedicated plan that will simulate actual pull-ups and strengthen the muscles in that specific movement pattern. In my experience with clients and athletes, getting your first pull-up is as simple as periodizing four exercises and just requires hard work and patience.
Accountability is key. Most people know they have weaknesses but don’t know how to address the issue.

The Dead Hang
How to do it
Find a bar and just hang as long as you can!

Why it works
You might be surprised but this exercise will really test your grip strength. If you can’t perform a strict pull-up there’s a strong chance you can’t hang on a bar for more than 30 seconds either. Having a weak grip is a contributor to pull-up weaknesses. The stronger your grip is, the greater your work capacity to perform pull-ups.

How to do it
Set up rings to a height that is roughly at the hip. Hold on to the rings and slowly lean back until your arms are fully extended and your torso and legs are straight. Pull on the rings until your hands reach your chest. Do not use your hips to assist you. The stronger you are, the lower you can set the rings and bring your torso to the ground.

Why it works
The ring row is a basic back strengthening exercise. If the other movements are still too difficult, even after adjusting to easier levels, stick with ring rows for a while. A study in the International Journal of Industrial Ergonomics revealed that most pulling strength is exerted when the arms are 90 degrees to the sagittal plane (a vertical plane which passes from front to rear, dividing the body into right and left halves), which means this a great exercise for beginners to start developing pulling strength.

The Segmented & Eccentric Pull-up
How to do it

The name is a little crazy, but it’s the best way to describe what you’re doing. You’ll start on a box set up to a height where you can perform a pull-up. The great part about this set-up is that it can be adjusted to any strength level. If you’re very weak, you might have to stack some plates on the box so that you’re closer to the bar (you can even be just a few inches from the bar if needed). If you’re close to your first pull-up, you’ll be setting up a height that is a lot lower.
The reason it’s called a segmented pull-up is because this height will be referred to as a segment of the repetition. For example, if you are starting your pull-up on a height where your arms are bent 90 degrees, this is a half-rep segment.
Now that you have the set-up, it’s time to do some work. Pull yourself over the bar from this position. The next step is lowering your body down in a slow and controlled manner to a complete dead hang. You’ll have to pull your feet back to avoid hitting the box. A common mistake is people who lower themselves slowly to about halfway, hold it, then drop fast. You must lower yourself slowly throughout the entire range of motion to develop bottom half strength.

Why it works
This is known as eccentric-enhanced training. What we’re really doing is overloading the eccentric phase of the pull-up, which is the going down portion. Since you’ve never performed a pull-up before, you’ve never experienced that much resistance loading on the back muscles. A study done by the Journal of Strength and Conditioning concluded that eccentric-enhanced training results in an increase in concentric power. The researchers believe that since a heavier than normal load is applied to the muscles, an increase in muscle tension and cross-bridging of fibers occurs. Another benefit of eccentric enhanced training is that it strengthens tendons. This is especially important if you plan on performing kipping and other gymnastic exercises in the future.

The Barbell Assisted Pull-up
How to do it

Set up a box a few feet away from a rack. Then set up a barbell on the rack. How high you set the barbell is determined by your strength level. The weaker you are, the higher you will set the barbell so more weight is distributed to the box. Hold on to the barbell with a pull-up grip and put your feet on the box. While keeping a vertical torso, pull your chin over the bar as you would a pull-up. It’s very important not to use your hips to kip up. Always descend to fully extended arms and make sure the barbell is set to a height where your butt is not on the ground.

Why it works
The barbell assisted pull-up is the most underrated exercise out there for those who can’t perform a pull-up. If someone can’t perform a push-up, we almost always recommend performing push-ups on the knees to remove some of the bodyweight. This exercise is essentially the same concept. You’re literally performing pull-ups with less bodyweight, but without any elastic momentum from a band. This allows you to produce force in the required muscles in a full range of motion-which is vital in the pull-up.

The Program:Putting it All Together
Perform these exercises before a WOD. We’re using Monday, Wednesday, and Friday as examples, however you can use any days you choose, given there is at least one day in between to recover.

Monday
The Segment+Eccentric Pull-up
5 sets of 4 repetitions. Take 3-5 seconds to descend to a dead hang. Rest 90-120 seconds between sets. We’re working on strength here, no need to rush.

Dead Hang
3 sets to failure. Just when you think you can’t hold on any longer, count to 15! Rest as needed.

Friday
The Segment+Eccentric Pull-up
5 sets of 3 repetitions. Take 5 seconds to descend to a dead hang. Rest 90-120 seconds between sets. 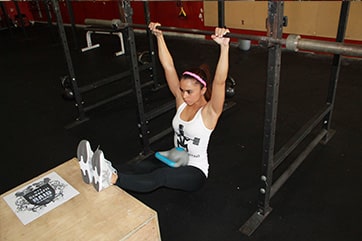 Progressing is simple. Every week, make small advances to continually challenge the muscles. For the Segmented+Eccentric Pull-up, lower the starting height. For example, if you started at a height on a box with three 10lb plates, remove one plate the following week. For the Barbell Assisted Pull-up, lower the barbell rack height. If you are already as low as possible without your butt touching the floor, start adding weight to your lap in the form of plates or kettlebells. For the dead hang, just hold on longer. For the ring rows, adjust your feet so your body angle is lower. Repeat this program as long as it takes to get a strict pull-up!