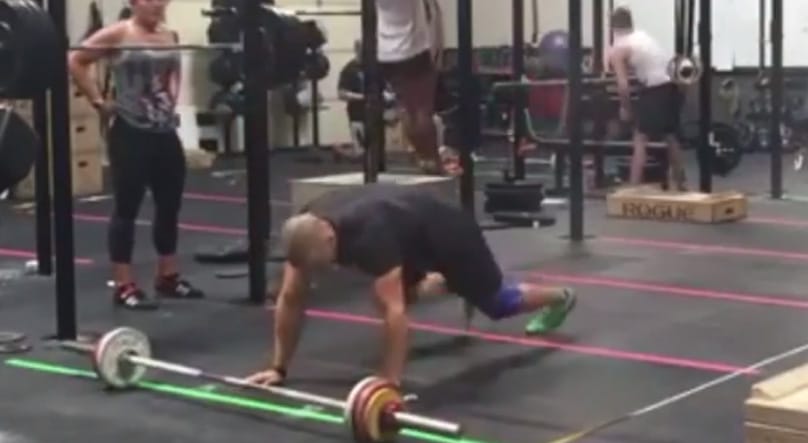 What makes sport enthralling to watch is great competition—that, and a little bit of drama. With thousands of athletes around the world competing in the CrossFit Open, that drama is bound to happen, and this year, it came early. As you read this article, bear in mind that there are two sides to every story—it’s up to you to decide which side is right or wrong. Last Monday, Director of the CrossFit Games Dave Castro made this post on his Instagram profile with regards to an athlete submission from Team OPEX, an unaffiliated gym in the Southwest Region founded by 2007 CrossFit Games champion James Fitzgerald–OPEX have sent at least 50 competitors to the CrossFit Games and have over 500 CrossFit Games Regional athletes.

You can read the full description on uncommon movement clauses/range of motion exceptions in the CrossFit Games Rulebook (section 1.24). In it, the following statement reads:

“Any movement deemed uncommon, out of the ordinary or used to amend, shorten or change the accepted movement standard or range of motion including line of action of any event movement can and will be disallowed. It is the responsibility of the athlete to notify their judge or CrossFit Inc. of any questionable movement before the workout.”

In this instance, the use of smaller metal plates to make the prescribed weight for the workout (95/65lbs) brought the bar closer to the ground, therefore shortening the height of the jump on the bar-facing burpees. Unfortunately for the athletes that chose to load their bar this way, CrossFit HQ declared that they will receive “a major penalty, and lose 15 percent of their reps on the workout.”. While there isn’t anything in the Rulebook regarding the diameter of the weight plates required on a barbell, using smaller plates violates the above ruling regarding movement clauses/range of motion.

In response to this news, OPEX Fitness released this statement, titled, ‘The Facts of Open Workout 16.1’. Their very first sentence is as follows:

“First things first:
OPEX asked CrossFit® if it was ok to use smaller kilo plates instead of rubber plates…we were told that we could in fact use them.”

OPEX states that they asked the South Regional Director of the CrossFit Games if they could “use the small kilo plates on the bar instead of the rubber plates.” The Director reportedly responded with, “Yes as long as the weight is g2g [good to go].” Once the social media posts were released on Castro and CrossFit HQ’s social media accounts, the OPEX team contacted the South Regional Director to correct the situation. That individual told OPEX that the ‘top 3’ at CrossFit HQ were in possession of the earlier message discussed between the two parties regarding the plate choice, and they would be ‘handling it’. Up to this point, however, those OPEX athletes who used smaller diameter plates have been docked 15% penalties.

The author of the post claims that the purpose of the post is not to start a fight with CrossFit HQ, but to “remedy the false accusation against OPEX and its athletes.” Presumably, the accusation leveled at them by Castro of being cheaters and the continued presence of the post on Castro’s Instagram page for the world to see—despite being granted an OK by the Regional director to use the different weights.

In regard to the cheating accusation, the author of the post continues: “All of our onsite athletes have to post all of their videos because we are not a CrossFit® affiliate. We have had 3 years of consistent communication with our Regional Directors where we ask them any questions that we have about the workouts. We ask them because we can’t hide ANYTHING because we have to post our videos each week.”

It is true that in CrossFit, there have been previous attempts to reduce range of motion or alter a movement to gain an advantage; Some male athletes have used women’s bars which are thinner and less taxing on their grip. We have seen smaller wall balls in the past as well, and just last year there was some  controversy during the first workout of the Open, where athletes intentionally bombed 15.1, posting scores of 1 round or even just a few reps, to allow themselves to be fresh enough to post a huge number for the clean and jerk. Those athletes were also subjected to penalties from CrossFit HQ, who deemed that their performances ‘clearly strayed from the intent of the competition.

The CrossFit Games is a sporting competition, just like any other, and athletes of all sports are always going to look to find an advantage over their competitors. In basketball, teams will intentionally foul poor free throw shooters on the opposing squad in crunch situations, hoping that the player will miss and they will get the ball back. Players in soccer, ice hockey and even football will flop in order to ensure they get a favorable call from the ref.

OPEX may feel that they were just trying to get a competitive advantage through using smaller plates. An advantage they felt was sanctioned by a CrossFit official. Now, they feel that their name, coaches, and athletes are being unfairly targeted.

On the flip side, the Rulebook notes that any questions regarding the Open workouts need to be addressed to CrossFit HQ, not Regional Directors. Some people have also noted that the OPEX team should have been more specific in their request, clearing stating the smaller diameter of the kilo plates they intended to use.

CrossFit is a young sport, but it seems that greater emphasis needs to be placed on future rules to give more specificity with regards to movement standards and equipment in particular. Think of the first time the butterfly pull-up made an appearance at the CrossFit Games in 2007; That was a new movement that could very well be considered unnatural, but now is standard among every Games competitor.

The controversy surrounding 16.1 won’t be the last time we see incidents of athletes trying to get ‘creative’ in Open workouts, but let it be known that CrossFit HQ reserves the right to invalidate and deduct scores if they feel those attempts go against the intent of the competition.