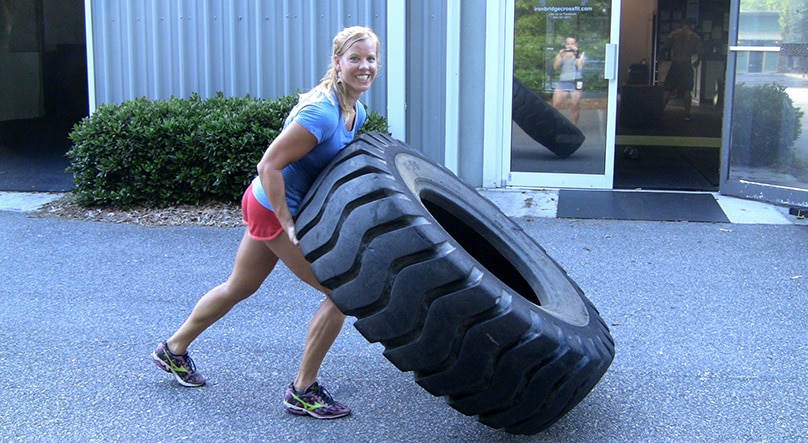 Over the course of her life, every woman has a one in eight chance of developing breast cancer and/or ovarian cancer. When facing surgery to reduce the chances of contracting the disease, how does one prepare, both mentally and physically? Beth Adamson tells us her story, which she hopes will create awareness of the BRAC Analysis test, and inspire other women facing surgery.

CrossFit is a huge part of my life, teaching me many things. It’s only natural, perhaps, that it has helped me face the possibility of getting cancer.

I started my CrossFit journey in December of 2009. Just one year later, I had earned the L1 coaching certificate. Today I own my own affiliate, Iron Bridge CrossFit in Charleston, South Carolina. CrossFit has become integral to my being: I couldn’t imagine not being able to do it.

There is a history of breast cancer in my family. My mother was diagnosed at age 34, and my grandmother and great grandmother had similar stories. Today’s extraordinary medical advances mean that there is now a simple blood test (BRACAnalysis) we can take to find out whether we have the genetic mutation for a particular gene (the BRCA gene) which increases the odds of developing breast and ovarian cancer. After taking the test, I wasn’t surprised to find that I was positive for the mutation in view of my family history. A positive test meant, for me, an increased risk of up to 87% of developing breast cancer and up to a 44% of developing ovarian cancer. I had two options. The first would be to take tamoxifen (a drug used for cancer) at a low dosage for the rest of my life, and an MRI screening every six months that would not be covered by insurance. Not to mention that I would still have to take steps if something were found later. The second option was to have both breasts and ovaries removed, reducing the odds of developing cancer by 99%. For me, the decision was simple. I would have the surgery. (Currently, Beth has not yet had her ovaries removed).

As most readers will know, CrossFitters are – in no small part thanks to the training – generally equipped with mental and physical toughness. I have to admit that I felt disappointed that all I had accomplished (and still had in mind to accomplish) with CrossFit would soon be challenged. But I also knew this surgery was something that needed to be done if I wanted to free my mind of the fear of developing cancer.

I decided that being in tiptop shape before the surgery was the best approach, and put all my efforts into preparing my body and mind for what lay ahead. I had read up on the procedure itself, but I hit a wall when trying to find out about the experiences of people with a similar lifestyle who had undergone the same operation. What was the recovery process?  How long would I have to wait before getting back to stringing butterfly pull ups and muscle ups together? What about catching a heavy clean on my chest for that matter? Would I ever perform these movements again without fear of injury? Would my affiliate suffer if I couldn’t properly demonstrate movements for my athletes? I had so many questions, and of course I felt some measure of anxiety. What I did know is that I would work day and night to get back to where I was and start PR’ing again – within safe limits, of course. Frustratingly, I could not find any supporting information online. After showing my doctor a highlight video of my capabilities, he declared that he “hoped” that I could regain that level.

To prepare for surgery, I did CrossFit five to six days a week for six weeks. Additionally, I performed superset isolation movements four days a week to target all those minor muscle groups in and around my chest. I started eating STRICT paleo approximately two weeks before the operation to forestall inflammation. I went into the surgery feeling like a Viking!

When my Doctor came to see me after surgery, he had a few comments! Firstly, he had only needed to cut 10% of my pectoral muscle as opposed to the normal 30-50%, due to the fact that my pectorals were three times the normal size for a woman. Not only that, the muscle handled much better under the intense pulling and stretching than was the norm. (The thinner the pectoral muscle, the easier it tears under manipulation). Instead of a potential three operations, one was enough. Both my doctors were very pleased with my speed of recovery as well as the healing itself. The pain was tolerable – we CrossFitters know about soreness, and my pain was no worse than that – I was off all pain medication by day four. The physicians were confident I would regain function and strength.

However, this did not stop them from telling me what I MUST NOT do, instead of what I COULD do in the way of workouts. I was told no upper body workouts and no pulling/pushing, for six weeks. This was a little frustrating to put it mildly! I knew that my shoulders would lock up without stretches for six weeks. With some thorough research to back me up, I slowly began to exercise and to find out what I was capable of doing, making sure I didn’t experience pain or discomfort or risk causing any damage. After a couple of days following the surgery, I was able to walk for approximately an hour and test out a few air squats and lunges before collapsing back onto the sofa from exhaustion and dizziness. I knew I had a ways to go and wanted to get started right away, if my body would simply allow it. My range of motion suffered the most, but with consistent stretches, I had full range of motion after four weeks. Attempting my first WOD with deadlifts, box jumps, and double-unders at week three was very humbling. This WOD crushed me and made me realize I was in fact not the “superwoman” I thought I was. My body was telling me to slow down and take it easy, and I needed to listen.  As I sat back to try to catch my breath again, I envied all of those around me able to do the things I no longer could. However, it was important to keep my eye on the horizon and not allow myself to be discouraged. Getting to week five was through sheer will and determination. The payoff was being able to string kipping pull ups together, maxing out on my clean and jerk and attempting muscle ups again. At week six, I was setting up my barbell to complete the 2014 Open WOD 14.1 (I achieved 303 reps). My strength and endurance may still be lacking from where I was pre op, but I am showing marked improvements in all areas every single day and celebrating those small victories.

I am convinced that the healthy lifestyle CrossFit promotes is the reason why I have done so well. Had my body not been in the best physical condition possible prior to this surgery, I feel that both outcome and recovery would have been far different.

I have discovered the importance of keeping my chin up and celebrating the small victories, even if it’s just being able to extend my arm directly overhead, which I took for granted before. I keep track of what I AM able to do versus what I AM NOT able to do YET. I would be lying if I said I never once had a pity party for myself. My advice would be to take the step of facing your fears. And then, to be proactive with your health and life: both are gifts. Whatever challenge you may face, you have the power to be able to overcome it.