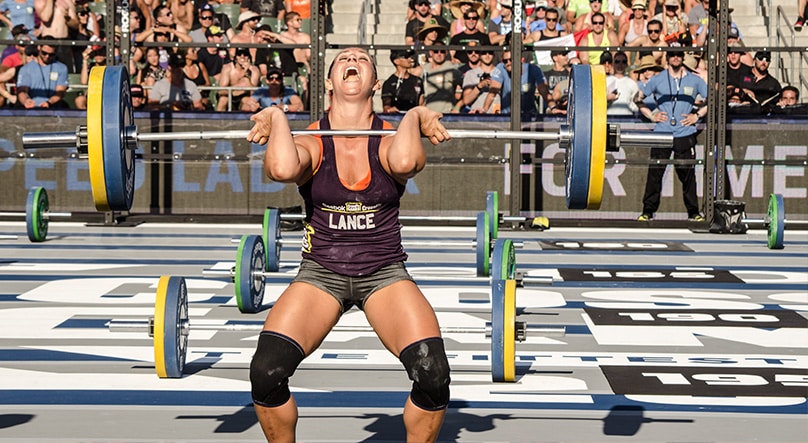 There are many distinctive sounds to be found within the walls of a CrossFit box. In addition to the thunderous concoction of barbells dropping on the floor and music blaring from speakers, one can always expect to hear the sounds of athletes grunting, howling and screaming as they exert themselves during a WOD. As an athlete who has a tendency to get rather vocal in his lifts, I have been told by certain athletes (who shall remain nameless) that this can become somewhat excessive and annoying. However, I always felt there was some method to the madness, and while I could not prove it, I knew that grunting helped my performance. After all, one need only look at the top tennis players, contact sports athletes, martial artists (if Bruce Lee did it, then I’m doing it) or Olympic weightlifters to realize that grunting may have its place in athletic performance.

Thankfully, those of us in Team Grunt may now have a rationale for our ‘annoying’ vocalisms after all.

What is a ‘grunt’?
A good grunt begins with what’s known as the Valsalva maneuver—taking a deep breath and holding it, thus closing the space between the vocal chords known as the ‘glottis’. This causes an increase in pressure within the chest cavity that, in turn, stabilizes the abdominal and chest cavities during physical exertion, and is particularly useful in heavy lifting. This part of the sequence is quiet.

The grunt occurs when the athlete exerts pressure, and air bursts through the glottis. It might arise just before the most extreme exertion or alternatively at the end of exertion, when the lifter exhales the air he or she has just held against the closed glottis.

The theory behind grunting and athletic performance
We commonly hear grunts and yells following success (and sometimes failure) in sport, such as a player scoring a touchdown, winning a race or nailing a snatch. Doing so helps to release tension and raises the ‘fighting spirit’ of the athlete. This has some carryover to our more violent pasts when warriors would yell and scream before, during and after a battle (remember Braveheart?). An article in the LA Times touched upon the subject of grunting, quoting exercise physiologists who say that a properly timed grunt can help a person stay focused and prepare for an explosive effort, as well as helping to counter the negative effects of nervousness. Nervousness can bring on a surge in adrenaline, causing an athlete to take short shallow breaths. Taking a deep breath, then exhaling deeply—with a grunt if necessary—can calm the athlete. For many athletes, grunting prior to an explosive act can help them mentally prepare for the exertion of force. If you remember the clean and jerk ladder from the 2013 CrossFit Games, you may recall Lucas Parker purposely going through a specific and prepared pre-lift ritual which included several grunts. It would appear that grunting, therefore, has a place in both the psychological and physiological aspects of sports performance. But what studies (if any) support this claim?

The studies that support it
A recent study in the Journal of Strength and Conditioning Research examined the effects of grunting in the performance of 32 Division II and III collegiate tennis athletes. The players engaged in a warm up, followed by six sets of tennis. In random order, half of these sets involved grunting, and the other half did not. Serves and forehand strokes were measured for force and velocity, and the players were hooked up to electrodes to measure muscle activity levels. The results found that grunting generated greater muscle activity, which translated to higher force output in their shots and ball velocity. In fact, the force of the hits increased by between 19% and 26%. This improvement also translated to an average increase in serve velocity of 4.9%. Even better, forehand stroke velocity went up by 5.4%. Additionally, the researchers found that grunting did not impair oxygen consumption.

You may be thinking that the nature of tennis doesn’t quite resemble the demands of CrossFit. Well how about martial arts?

In 2009 researchers from Iowa State University asked novice and experienced martial artists to measure their handgrip strength by squeezing a dynamometer, a device that measures force. They performed the task silently, and then again while performing a traditional breathing technique in martial arts known as a “kiap”—a sharp exhalation of air that can produce a quick, loud, deep yell. The combined results of both the novice and experienced athletes revealed a 7% increase in their handgrip strength when they did a kiap compared to when they didn’t. The researchers concluded that the kiap might increase hand grip strength in participants with as little as two months of training, benefiting novices slightly more than experts. Though the folks at Iowa State weren’t exactly sure why this martial arts concept improves grip strength, they believed that the expulsion of air (from the kiap yell) might stabilize the core and allow force to travel more rapidly through the limbs.

The conclusion
The practical application of grunting and how it relates to athletic performance is a subject that requires further study. In the meantime, and with the limited results so far available, opinions on the value of grunting are naturally going to differ. While most will agree that excessive grunting through every single rep of Grace can piss off an entire class, there is some science to suggest that if you are looking for any kind of advantage when it comes to quick bursts of power, letting out a grunt might do the trick. In some instances it may only be a psychological advantage, but we all know how important that can be when it comes to the heavy lifts in CrossFit. So those of us who emit the odd yell now have some ammunition with which to defend this habit, as long as it is practiced in moderation.