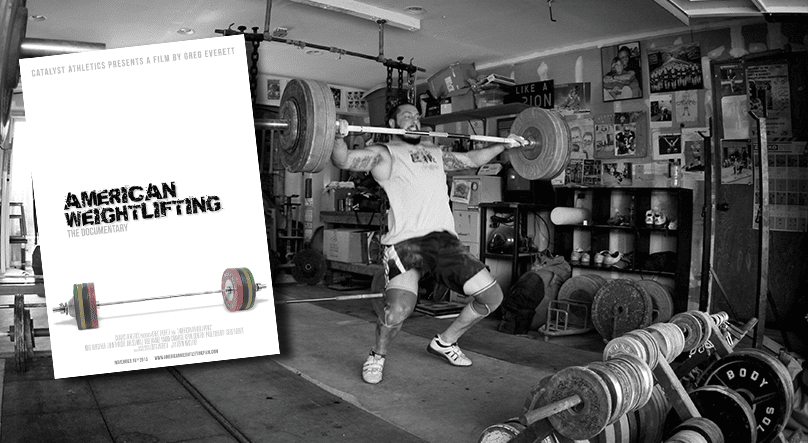 A black screen is accompanied by a soft tune on the piano. Slowly, a blurry image emerges from the darkness, and familiar shapes can be made out. A set of colorful bumper plates on the floor, a couple of squat racks standing close by. Two figures get into position on the Olympic platforms-their barbells lie patiently in front of them, ready for the coming lifts. Then, a voice materializes:

“I don’t know why we do it. It’s brutal, it’s exhausting, there’s no money, there’s no recognition. You just have to love it-even when it doesn’t love you back.”

On November 16th (this Saturday), American Weightlifting: The Documentary will be released digitally, worldwide and DRM-free on this website. The brainchild of Greg Everett, a weightlifting practitioner, coach, author and publisher, American Weightlifting is a feature-length documentary film about the Olympic sport of weightlifting in the US. Starting in 2008, the project took four years to complete as Everett continued to coach his weightlifting team and run his business, Catalyst Athletics, during the process. Amazingly, Everett wrote, directed, filmed, edited and produced the entire documentary himself (even composing the musical score), using no outside funding and operating on a very tight budget.

Not surprisingly, the documentary doesn’t feature amazing visuals or dramatic shots. Everett instead chooses to focus on the simple essence of weightlifting itself, and the film has a heavy dosage of athletes training, old photographs of competitive meets, and of course multiple interviews with American legends of the sport. Some of the big names featured include Jim Schmitz (3-time US Olympic team coach), Bob Takano (member of the USA Weightlifting Hall of Fame), Danny Camargo (US International coach) and Mike Burgener, a familiar friend to the CrossFit world and a Senior International Weightlifting coach.

The film profiles the current state of Olympic weightlifting in the US, with particular emphasis on the numerous challenges currently facing the sport in the country. Interviews with coaches and athletes throughout the documentary reveal just how obscure weightlifting is as a sport in the country, especially when compared with foreign nations that have far greater participation and funding. When combined with confusion of what competitive weightlifting actually is for most of the population (athletes in the documentary recall having to clarify how weightlifting was indeed different to bodybuilding), the task at hand does seem daunting. CrossFit as a potential solution is discussed briefly, and whilst the general consensus is that there won’t be any national champions in weightlifting coming from the sport, the interest that CrossFit has generated in Olympic weightlifting can only be positive. With the community of CrossFit growing exponentially, the added interest in weightlifting will mean more participation, more coaching, and hopefully greater funding.

All in all, this is a thoroughly interesting watch for anyone interested in the history and status of American weightlifting, with in-depth interviews and expertise from some of the best in the game, both past and present. And hey, you might even gain some technical tips from all the lifting on display throughout.

Here’s the trailer to American Weightlifting: The Documentary