High Bar vs Low Bar Back Squats. What’s the Difference? 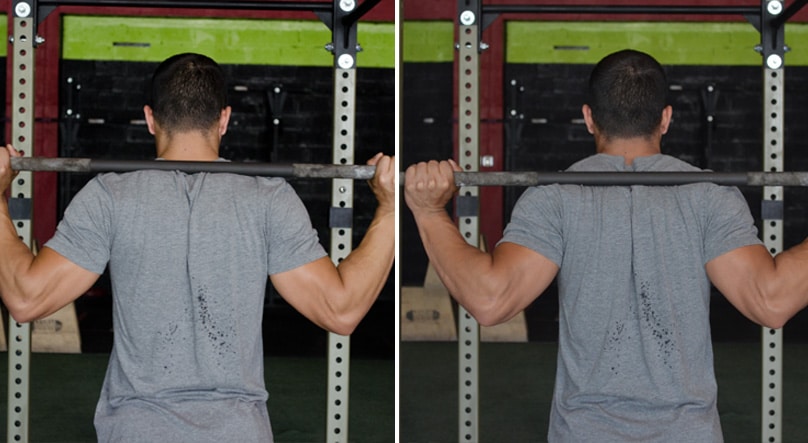 Everyone loves squatting and with good reason. The back squat in particular is arguably the most renowned weightlifting exercise in fitness, and a staple in the programming of powerlifters, Olympians, CrossFitters and countless other athletes. As renowned author and former powerlifter Mark Rippetoe notes, “The back squat is the only exercise in the weight room that trains the recruitment of the entire posterior chain in a way that is progressively improvable, and that is one of the things that makes the squat the best exercise you can do with barbells and, by extension, the best strength exercise there is.”

Needless to say, we love the back squat—and the back squat loves us. However, there is trouble in paradise. Or rather, debate. There has been a ‘heated’ discussion for some time over what the most optimal bar position is to use during the squat. What? There’s more than one? There is indeed, and if you weren’t previously aware, then read on to learn more about high bar and low bar positioning during the back squat.

Before we dive into the two techniques, it would be useful to understand why bar position matters in the first place. Simply put, having a balanced bar/lifter system, whereby the bar is positioned directly over the foot, prevents you from falling on your ass or your face—unless the weight is very light. But even if the weight is light if the athlete is still in a bad position, valuable energy is being expended to keep them from falling—energy that could otherwise be used to help bring the bar up. As the weight increases, this principle of holding a balanced bar position becomes all the more important.

Essentially, the placement of the bar during a back squat affects the joint angles involved and thereby influences how force is applied to the low back, legs and hip musculature. So depending on whether you are using the low bar or high bar form, the placement of the bar will change the lifter’s necessary positioning to maintain the bar/mid-foot relationship and affect which muscles are used.

So what do the two possible bar positions look like?

The high bar squat is probably the most commonly used form of squatting, which makes sense as it’s a comfortable place to hold the bar and it’s easier to squat with as there’s less to think about. As I mentioned, a high bar squat requires a vertical back (i.e. torso), and this creates a domino effect. The hip angle must become more open if the back angle is more vertical, and the knee angle must become more acute if the hip angle is more open as the knees get pushed forward. Having an acute knee angle means that the hamstrings – which cross the knee and hip joints—are contracted and slackened, which means they won’t be able to contract any further to help extend the hips out of the ‘hole’. This means that there is more emphasis placed on the quads and glutes as the primary movers to compensate for the lack of involvement from the hamstrings—though the hamstrings do receive slight tension once the knee angle opens up during the ascent of the squat.

As has been highlighted, the high bar back squat is great for developing strength in the quadriceps, glutes and therefore the Olympic lifts as well. Squatting with high bar form mechanically mimics the receiving position in the snatch and the clean, as you ideally want to your torso to be as vertical as possible to prevent the weight from falling forward and you’ll be recruiting your glutes and quads to help you drive out of the hole. Therefore it won’t come as much of a surprise to learn that high bar squatting is a typical favorite for Olympic weightlifters, and because it’s relatively easy to learn, it’s popular among the general population of fitness enthusiasts.

The more vertical position enforced by utilizing high-bar technique means that you won’t be able to squat as much weight as you would with a low-bar position. A vertical position in the squat takes pressure away from the spinal erectors and allows for a deeper position than one would achieve in the low bar squat. But doing so sacrifices the amount of weight you could lift, as you are unable to utilize your hamstrings – and thereby the full posterior chain—to its fullest. Lastly, if an athlete has pathology in in their knee, then high bar squats may provide too much anterior force and result in knee pain.

A low bar squat requires an athlete to have a more horizontal position in regards to their torso, which produces a more acute hip angle so that the hamstrings will be under tension at the bottom of the squat. Doing so allows for the hamstrings to contribute as much as possible to the extension of the hip during the ascent. At this phase of the lift the quads are brought in to action to help extend the knees, but they are also relied upon to help create balance around the knee so that the force of the hip extension doesn’t tip the torso forward.

First off, in contrast to the high bar position in which the bar can roll onto your neck if you lean forward too much, low bar is a very stable position. Though technique does come into play, during a low bar squat you are limited by strength, not torso angle. Since you are leaning forward more than you would be in a high bar squat, your knees don’t travel forward as much, thus shortening your range of motion. This style of squatting also puts a premium on working the posterior chain rather than the anterior. For these combined reasons, an athlete is generally able to lift more weight with a low bar squat technique, which makes it popular with powerlifters.

In addition, squatting with low bar form can help with the second pull in Olympic lifts the posterior chain is responsible for the fast extension of the hips in the clean or snatch. However, it must be noted that the low bar squat is not productive for teaching and ingraining proper receiving position in the snatch or clean.

Finally, using low bar form helps to balance the force around the knee because the hamstrings are pulling back on the tibia, which will obviously be beneficial for athletes with knee issues.

Low bar squatting is tricky to execute well, as Justin Lasceck of 70’s Big explains: “Since this style of squatting is dependent on the hamstrings, the body’s positioning — particularly the knees — is much more important. If the knees shift forward at the bottom, then hamstring tension will decrease and will result in no bounce whatsoever.”  Another element to consider is a lack of flexibility in an athlete’s shoulders which would prevent them from putting the bar in the right position, potentially resulting in shoulder, wrist or elbow pain.

As with most things in life, selecting a bar position to use in your back squats should coincide with your personal goals. If you are more interested in moving big weight, then a low bar squat may be your best choice. If you want to increase your strength with regards to Olympic lifting. Fortunately, since we all do CrossFit, the answer is pretty obvious. Use both. That way, you’ll be able to reap the full benefits from each technique and target your weaknesses, which is what our sport is all about anyway.