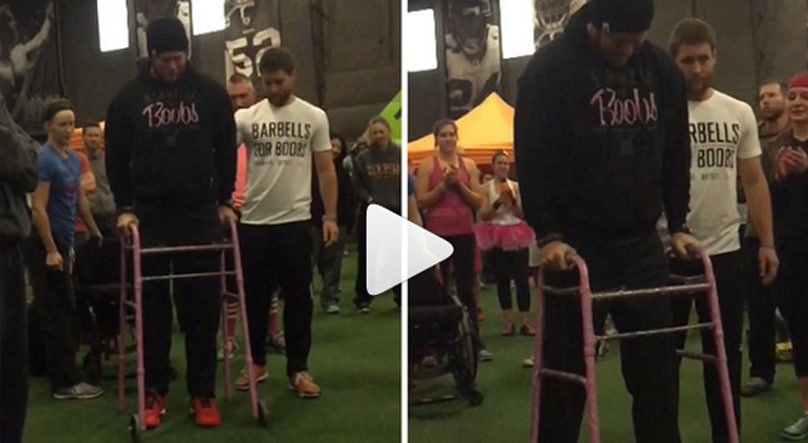 Earlier this month the 2015 OC Throwdown took place in Costa Mesa, CA. On Sunday, January 12th, the athletes completed their last heats of the competition and the winners were crowned. But for Kevin Ogar (and many others in the functional fitness community), that date is far more significant than any medal or prize. Exactly one year ago on that date, January 12th 2014, Kevin suffered a critical injury to his spine after a failed attempt on a 3 rep touch-and-go max snatch event at the same competition. He suffered a separated T11/12 and severed his spinal cord, leaving him paralyzed from the waist down. When news of the incident broke, the CrossFit community rallied around Kevin and began raising money through a charity campaign (Ogar Strong) to help the uninsured athlete recover.

One year on from the tragic incident, Kevin Ogar is still inspiring thousands of people all over the world. In addition to participating in the 2014 Open, acting as an ambassador for Barbells for Boobs, competing in the upcoming Wodapalooza event in Miami AND getting engaged (congratulations Kevin!), Kevin has demonstrated an indomitable will and resilience against the perceived odds that a paralyzing injury can bring. If you need any proof of that, you need only look at the video below, posted by Kevin on his Instagram page, showing Kevin walk with the assistance of a walker. In fact, Kevin has been continuing the fight to walk again with a device called Indego, which helps him stand and walk by triggering a step when his hips are in the right position. On his first day of using Indego, Kevin shared his thoughts on the device with kdvr.com:

“I asked them today if they could program it to squat, that’s one of the things I truly miss,” Ogar said. “They said yes, maybe, quite possibility in the future.”

If there was ever a statement to sum up the kind of guy that Kevin Ogar is, that was it. Keep fighting brother.