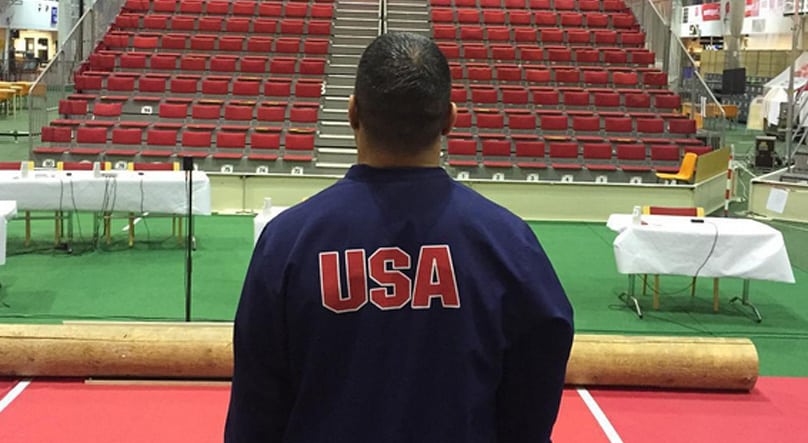 Back in March we brought you the news that Olympic Weightlifting veteran and coach Danny Camargo, 38, made a competitive return to the sport after 18 years in retirement. On March 5th, Camargo, one of only 14 Senior International USA Weightlifting coaches in the nation, competed at the Altamonte Open weightlifting competition, putting up a total of 242kg/533.5lbs that ensured his qualification to the Masters World Championship, which took place from September 12th to the 19th.

2nd in the World (Silver medal)!!! And why not 1st place Gold medal? The champion was way out of my league, that's why. But I'm fully happy with my performance and have nothing negative, down, critical, or excuses to mention. In fact, I'm now willing to talk about my PRs having done them in front of judges: Snatch of 264lbs/120kg and Power Clean+Jerk 308lbs/140kg for the second place finish. Thank you all who tuned in. #bestrong #weightlifter #weightlifting #international #bluedynasty #comeback #finland #mastersfinland #crossfit #strong #silver #olyconcepts @teamolyconcepts @progenex @dannyxsoul @usa_weightlifting @sara_campbell19

Taking silver at the World Championships (and setting two PR’s in the process) is not a bad way to come out of retirement—but it’s even more impressive when you consider how busy Camargo has been this year. As the owner of Altamonte CrossFit and Camargo Oly Concepts—where he coaches competitive weightlifters on his team, Team Oly Concepts—Camargo must devote much of his time to teaching his athletes, allowing precious little opportunity to focus on his own training. In this year alone, Camargo has coached his athletes at the Junior Pan American Championship in Colombia, the Junior World Championships in Poland, and most recently the USA National Championship in Texas. BoxLife spoke to Camargo in advance of the World Championships about balancing his duties as a coach and an athlete.http://essayhackers.com

How are your preparations coming along in advance of the Masters Championships next month?
DC: That’s a good question. It has been inconsistent, it has been hard to maintain, and it hasn’t gone according to plan because I am so busy with my full-time job as a coach and a gym owner. When I agreed to take on the challenge of competing at the Masters World Championships, I did so with the condition that it would not affect my coaching, because I have athletes that depend on me. I continue to put coaching at a higher priority as a gym owner and a business owner, even with this competition approaching. As a result, my training—which I have been able to do—hasn’t gone as one would think. I want to get in a solid four days of training per week, but sometimes it’s less. But I feel that my schedule will change in these last few weeks. I purposefully set it up that way so I expect it [my training] to go a little better when it matters most.

You’ve made the transition from athlete to coach and now back to a hybrid coach/athlete. What has that transition felt like to you?
DC: I’ll start by saying that it’s much easier to be the athlete—being a coach is the harder job. I would do anything to trade places with some of these athletes that I coach in competitions—but I suppose I have an opportunity to do that coming up (laughs)! But the transition has actually been very easy, and the reason why is because every time I’ve made a transition, it’s been clearly defined. There was no overlap, there was no doubt or confusion, it was clearly lined out every time I made a transition.

Why do you think it’s easier to be an athlete? What is it about coaching that’s much tougher?
DC: As an athlete, you’re primary focus is yourself. You may keep track of your competitors, but ultimately you’re responsible for how you perform. As a coach, you’re responsible for everyone. A lot of the praise and blame falls on you as the coach. As a coach I must be selfless and always come last. So it becomes very stressful when you try to manage multiple careers at the same time and get the best out of each one. There are tears and tantrums and rollercoasters that you have to take with each of your athletes.

Have you picked up any tips from your current athletes that you’ve employed in your own training as you prepare for the competition?
DC: Yes, through the mistakes my athletes make over and over again, and those who have grown from those mistakes and become very mature athletes. Mistakes such as overtraining, pushing too hard, not listening to the body—especially at my age, I have to. Other mistakes like focusing on the wrong things. I watch my athletes unfortunately dwell on social media content ahead of a competition and that can negatively affect them. I don’t use it much anyways, but leading up to the Masters I am definitely going to turn it off as necessary and focus on what I have to do.

What is the age division and weight class you will be competing in?
DC: I am competing in the 35 to 39-year-old bracket, 85kg/187lb division.

Are you monitoring your competitors to see how they’re progressing?
DC: The IWF (International Weightlifting Federation) send out information as the competition nears. One such piece of information is called a start list, which is a roster of competitors in each age division. And that roster has a pre-competition ranking, and they rank you based on the total you lifted to get you there [the competition]. Even though there’s a qualifying standard, many exceed it. Now, that is never something to dwell on because you may show up and the competitors are doing more weight by that time or they could have a bad day and do less. In fact, I purposefully qualified with the bare minimum because I don’t want people to know what I’m capable of just yet. Having said that, looking at this start list I’m currently in 2nd place unofficially, and the guy in 1st is doing numbers I feel I can do. We don’t know until the day of competition, but I’m feeling confident.

Camargo Oly Programming is a weightlifting program for competitive athletes looking to improve their snatch and clean & jerk through a systematic approach that focuses on both technique and strength.

The goal is simple: consistent gains across all lifts to keep you setting new PRs.