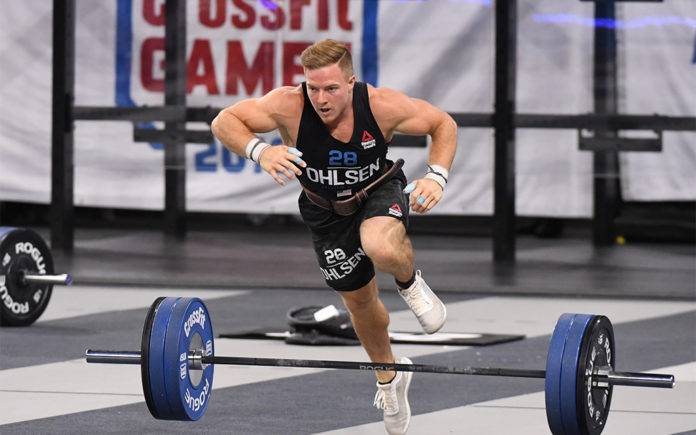 Noah Ohlsen has a resume most CrossFit athletes would envy: the 27-year-old has won the Open, won his region four times and dominated the Team Series with Travis Mayer last year. The only podium he hasn’t taken, much less stepped on, is that of the Fittest on Earth. Ohlsen finished fourth in 2017 and sixth at this year’s CrossFit Games after a series of unfortunate events.

In the first event, his bike pedal came off. In the second event, he received three muscle-up no-reps. He also received a ten-second penalty in the clean and jerk ladder event for stepping around instead of over the barbell at one point to get chalk.

“I was, as with every year, hoping that this was going to be the year that I get on the podium, but it felt like a Murphy’s Law type of thing, like everything that could have gone wrong seemed to go wrong,” Ohlsen said. “There were just so many little things that happened that I felt like were working against me. It just wasn’t meant to be this year but that just means I’ve got to try again and I’m ready to dig in and do so.”

The Miami native remains upbeat and optimistic, epitomizing his mantra of “Happy But Hungry.” Ohlsen and his girlfriend Joann moved from Florida to Georgia earlier this year so he could train in-person with coach Max El-Hag of Training Think Tank in Alpharetta. The in-person coaching, combined with the push from four-time Games athlete Travis Mayer who also trains at Think Tank, prepared Ohlsen better than ever for the 2018 CrossFit Games season.

“I think it was just having the confidence to know that we touched on everything: I was lifting heavy, I was swimming once a week, I had gotten on a bike and ridden a bike a few times, I was doing metcons constantly and hitting the track once a week doing speed sessions, doing endurance sessions,” Ohlsen said. “I was just so physically prepared and everyday feeling good, being able to build that confidence I think was really helpful, and I feel like we have the framework for it now and we’ll be able to repeat that in the future.”

The move to Georgia was open-ended, Ohlsen said. Joann was applying for physical therapy schools while they were there, and she was accepted to both Emory in Atlanta and the University of Miami. She chose the latter, so after the Games, they moved back to Miami where they are settling into a new house with their Insta-famous golden retriever, Maximus. Ohlsen is back training at his home affiliate CrossFit Peak 360 and, with big changes to the Games this year, training could look a little different than last year.

“I’m bummed that there’s no regionals, I’ve always performed really well there and enjoyed that experience so I’m sad that that won’t be happening anymore,” Ohlsen said. “But regarding having 200 male athletes competing at the Games, I don’t know that just seems a little crazy, and I’m really curious to see how they’re able to pull that off.”

While Ohlsen historically performed well at the now-defunct regional competitions, he can now turn his training attention to the Open, where he’s also done pretty well: he won the whole thing in 2016 and placed second in the world the next year. While this year his training was Games-focused as making regionals was likely in the bag, Ohlsen said the strategy may change this year.

“The fact that you can qualify straight out of the Open is definitely one route that I think I may take,” Ohlsen said. “I don’t want to just say ‘alright, I don’t need to do any competitions I’m just going to do the Open and qualify through that’ because you never know what can happen, but I think that typically the Open-style stuff has been pretty suitable for me.”

“Now you can kind of say alright, well, it makes sense to train for the Open a little, and those are a lot of the movements and exercise styles that I like. So that may be a positive, being able to train Open-style stuff where I hadn’t really in the past, and that could earn me a spot straight to the Games.”

Or, he could qualify through one of thirteen CrossFit-sanctioned events like Wodapalooza – conveniently hosted in Miami. Ohlsen had a three-year sweep of the event before taking second place at the 2018 competition after competing in the men’s elite team division.

Speaking of teams, would Ohlsen join a team for the CrossFit Games if qualifying as an individual doesn’t work out?

“I don’t think it would be as fulfilling as achieving this goal of trying to individually be the fittest man on earth that I’ve had for the past few years,” Ohlsen said. “I don’t want to give up until I have achieved that goal, so I’m not quite ready to hang up the individual side of things, but I think eventually yeah it could be lot of fun to do a little team thing.”

However he qualifies, Ohlsen is “happy but hungry” and ready to see another Games season. This time, he hopes, from a podium vantage point.

“I’m still waiting to hear more official detail on what the season’s going to look like, but I’m all in, still trying to be the Fittest on Earth, whichever way we’ve got to do it,” Ohlsen said.