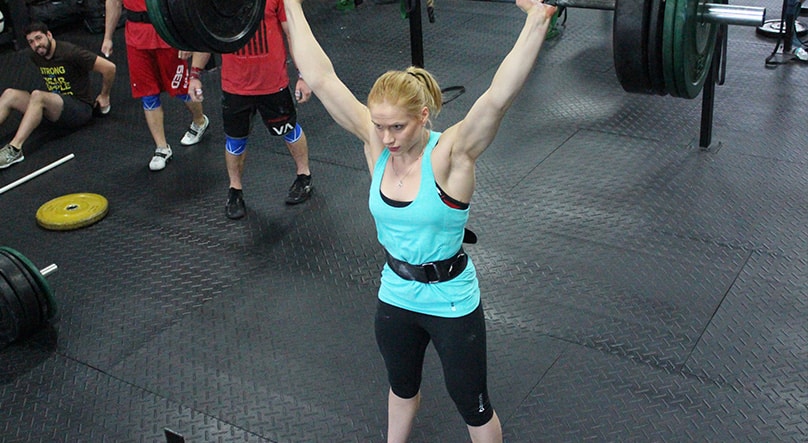 Four down. One to go. CrossFit athletes across the world have spent the last four weeks wall ballin’, muscle-up’n and clean and jerkin’ their way through the 5th annual CrossFit Games Open. There have been surprises and tears, blood spilled and sweat given. Ripped palms and bruised egos. Unvanquished spirits and undeniable victories. With one workout left, it’s time to muster all the strength, endurance and gumption you have left, because make no mistake about it: 15.5 is going to be tough.

Before we get into our prediction, let’s reflect on another challenging workout: 15.4.

While most of us spent the majority of 15.4 swearing at that damn ‘foot line’ we needed to clear, two athletes were busy demolishing the workout. You may not have heard of Kristin King and Jacob Anderson before, but their performances in 15.4 have put them on the CrossFit map.

King is a multi-year Regional competitor from Harrisburg, Illinois. She’s never competed at the Games, but the 34-year-old turned in a mammoth score of 180 reps in 15.4. That means King finished all the handstand push-ups in the round of 27. To get all that work done, she had to complete a rep every 2.6 seconds. King’s performance was so dominant that her next closest competitor, 2014’s 4th fittest woman Michele Letendre, finished 13 handstand push-ups behind King (167 reps).

Things were a little closer on the men’s side, with 21-year-old Jacob Anderson edging out four-time Games champ Rich Froning 183 reps to 174. The South East Regional competitor completed all 27 handstand push-ups in the set of 27 plus three 185lb. cleans.

With one workout left of the 2015 CrossFit Open, here’s how the leaderboard looks.

The Reasoning:
There are a few things to discuss here, so we’re going to tackle them one at a time.

The movements
With the inclusion of (power) cleans in last week’s workout, we’re left with a definitive list of movements that have featured in previous Open seasons, but are yet to make an appearance in 2015:
Rowing
Thrusters
Burpees
Box Jumps
Shoulder-to-overhead

We think it’s safe to assume that all of these movements, save for shoulder-to-overhead (considering the likely inclusion of thrusters), will be used in 15.5 in some capacity. After all, it would be weird to have an Open without them. No burpees—can you imagine that?

Now, when thrusters are in an Open workout they usually play a major role—hence our inclusion of it in a 21,15,9 format. We all know burpees are coming tomorrow (they are…right?), but probably in a way we haven’t seen before. And with the flexibility afforded to Castro through the Scaled division this year, burpee bar muscle-ups seem like a good candidate.

The format and the athletes
There’s one glaring omission from the 2015 Open—the fabled chipper workout. And, considering the athletes on show, we can see why Castro has probably left it till last. We imagine that the Games staff places almost as much value on creating an entertaining workout as they do an effective one. To that end, we think that not only will 15.5 be a chipper—it will also be ‘for time’.

Think about it—Camille Leblanc-Bazinet, Sam Briggs and Annie Thorisdottir, all former champions and three athletes with great engines. If ever there were an Open workout designed to be a flat-out race, this would be it. Our design of 15.5 allows for a balanced playing field in which all three women can highlight their strengths. BoxLife’s ideal 15.5 would come right down to the wire, with all three women hitting those final nine thrusters at around the same time. What an exciting climax that would be! Not only would it be fun to watch, but since it’s easily scalable (regular burpees instead of burpee bar muscle-ups), athletes of all levels in the community would have a great time fighting their way to the finish line. A finish line full of thrusters. Wonderful.