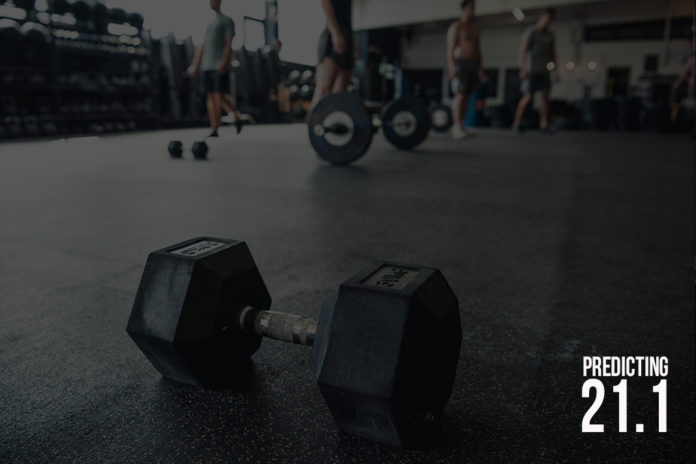 The 2021 CrossFit Open is officially upon us! As is the case with most things nowadays, this year, things are a little different. For the first time since its inception, the Open will take place over just three weeks. Traditionally, the Open has taken place over five weeks – except in 2011, the inaugural year, when it ran through six weeks.

Of course, that’s not the only change taking place this year. Due to the pandemic, a limited equipment list has been released, which eliminates a few movements traditionally seen in the Open.

If you’re a fan of wall balls, you’re out of luck this year, as the movement clearly won’t be a part of the 2021 Open 😉. Also missing from this year’s list: rowing and ring muscle-ups.
To make the Open accessible to even more people, CrossFit has added a few additional divisions this year, including the equipment-free, foundations, and adaptive divisions.

Predicting 21.1
2021 marks the eighth year we’ve been predicting Open workouts. We’ve been ‘almost’ spot-on at least five or six times. Each year, the most challenging workout to predict is the first one. At that point, you’re starting with almost no information – what type of workouts have we done, what equipment have we used, etc. Nonetheless, we’re going to take a stab at it.

Why?
-We’re going with a triplet for the first workout. Seeing as how there’s a limited number of weeks this year, we figured Castro would probably pack in more movements each week.
-The first workout is usually a pretty long one. The last five Opens have all kicked off with a workout 15 minutes or longer (20.1 had a 15-minute time cap).
-As we’ve done the last few years, we’re ignoring Dave Castro’s clue on Instagram. The best predictions usually happen when you do that! However, take a look at Castro’s clue for yourself at the end of this post.

Go to games.crossfit.com Thursday starting at 7:30 EST to catch all the Open action.