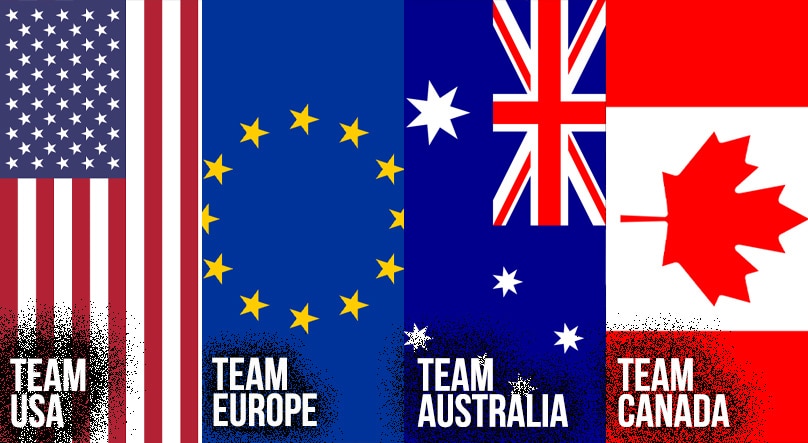 As you most likely have heard by now, the CrossFit Invitational is just under two weeks away, giving us plenty of reason to be excited about our sport this winter! On November 9th, Team USA will battle Team Europe, Team Australia and Team Canada in the first CrossFit Invitational to be held on American soil (the event will be held in the SAP Center in San Jose, CA). We’ve already written about the significance of the event, the history of the Invitational and whether the new format (multiple regions competing against one another) could be a precursor to a ‘CrossFit World Cup’. Now though, it’s time to get down to business, and preview the four teams that will be throwing down against one another in just 13 day’s time.

Coached by 7-time Games athlete and 2012 Invitational athlete Becca Voigt, Team USA look to be the favorites leading in to the competition. Any time you stack a team with two Games champions—one of whom is coming off of his fourth consecutive title—you know you’ll have a team to be feared. Of course, Froning and Khalipa were both members of the heavily favored U.S. Invitational team in 2013 that ended up losing to Team World in Germany—so sometimes stats don’t tell the whole story. But this is a one-day CrossFit competition, and anything can (and will) happen—nothing is for granted! Joining the men on Team USA will be four-time Games competitor Julie Foucher and 2014 individual rookie Games athlete Emily Bridgers. Bridgers is coming off of a great summer in which she finished 6th overall in her first CrossFit Games as an individual athlete and won the CrossFit Team Series with Team Reebok East. Alongside Bridgers is the familiar face of Julie Foucher, who finished 3rd at the Games this year and also competed with Froning and Khalipa on Rogue Fitness Black, which will surely come in handy when looking to establish team chemistry in preparation for the Invitational. The U.S. team is stacked with talent and a diverse range of skill sets, which will be key to tackling the varied nature of the events come November. They will surely be buoyed by raucous support from the home crowd as well, making the U.S. the team to beat. Of course the flip side is that there will be plenty of expectation for Team USA to perform and reclaim the Invitational title. Will they be able to handle the pressure?

The Europeans appear to be Team USA’s biggest challengers, as they have brought their own heavy-hitters in Sam Briggs (2013 Games champion) and Annie Thorisdottir (2011, 2012 Games champion) to the party. Briggs in particular will be eager to show the CrossFit world that she is still an athlete to be feared after missing out on the Games this summer, while Thorisdottir is in the midst of a successful return to competition in 2014 (including playing for the New York Rhinos in the NPGL) after missing out on the CrossFit season in 2013 due to injury. Balancing out Team Europe will be two rookie competitors from this year’s Games in Gudmundsson (26th place) and Hogberg (23rd place). There has been a huge shake-up in the men’s field in Europe this year, as all three qualifiers were Games rookies. At 22 and 23 respectively, both men bring a sense of youthful fire to the European team, which should balance nicely with the veteran leadership of Briggs and Thorisdottir. Pulling the strings of this international squad—which features athletes from Iceland, England and Sweden—is coach Mads Jacobsen. Affectionately known as “The Mad Scientist”, Jacobsen masterminded Team World’s upset over Team USA at the 2013 Invitational, and will be looking to repeat the feat once more with Team Europe in 2014.

The Australians may be thought of as underdogs, but the team brings a balanced attack and veteran experience that may surprise many. Leading the Aussies will be Kara Webb, a three-time Games athlete who led the women’s field at the Games this summer for most of the competition, only to withdraw from the final two events due to injury. Denae Brown is the oldest athlete in the team at 35, but she won the Australian Regional this year and qualified for her second Games (though she has only competed at one due to pregnancy), finishing 17th. Rob Forte is no stranger to the big stage, having qualified and competed at the Games for the last four years. 2014 was his best Games to date, finishing 12th. Khan Porter is the young buck of the squad, as the 25 year-old qualified for his first Games this summer, finishing 27th. But since the Games he has been gaining valuable experience and ‘playing time’ competing with the DC Brawlers of the NPGL. The coach of Team Australia may be the most recognizable name of all. Chad MacKay is a three-time CrossFit Games competitor and was a member of the victorious Team World last fall, and could be seen coaching Lynne Knapman of the Masters 50-54 Division at the Games this year.

The wildcard for the Invitational this year will be Team Canada, but if they fire on all cylinders, there’s no question that they have the talent to upset (and surprise) a lot of people come November 9th. Leading the Canadian charge will be the reigning fittest woman on Earth, Camille Leblanc-Bazinet. Bazinet has been a constant fixture at the Games since her rookie appearance in 2010, and in that time she has accumulated three top-10 finishes—not to mention taking her first title in 2014. On top of her impressive display at the Games, Bazinet was also a member of Team World at the Invitational in 2013, so she will be able to bring invaluable experience and wisdom to her fellow teammates as they prepare for their first Invitational appearance. Michele Letendre is fresh off of her best finish at the Games to date, where she took 4th, just missing out on the podium. Letendre has steadily improved as a CrossFit athlete over the past four years, finishing 25th, 24th, 13th and 4th in 2014. A long-time rival of Bazinet’s in the Canada East Region, the two will now get to compete together as teammates. When Team Canada takes the floor at the CrossFit Invitational, no one will mistake the iconic look of Lucas Parker, whose famous beard has accompanied him to the Games for the last four years. The 25-year-old struggled with injury in 2014 (finishing 34th), but his passion for competition and some time off will provide the crowd in San Jose with some great entertainment. Paul Tremblay is coming off of his first appearance at the Games as an individual, where he finished 31st. Despite his modest finish, Tremblay stood out on the Overhead Squat (sixth, 365 lb.) and Push-Pull (fifth, 5:07). The coach of Team Canada will be Reed Mackenzie, owner of CrossFit Taranis. MacKenzie has qualified teams to the Games for four seasons, so he knows what it takes to make a team successful.