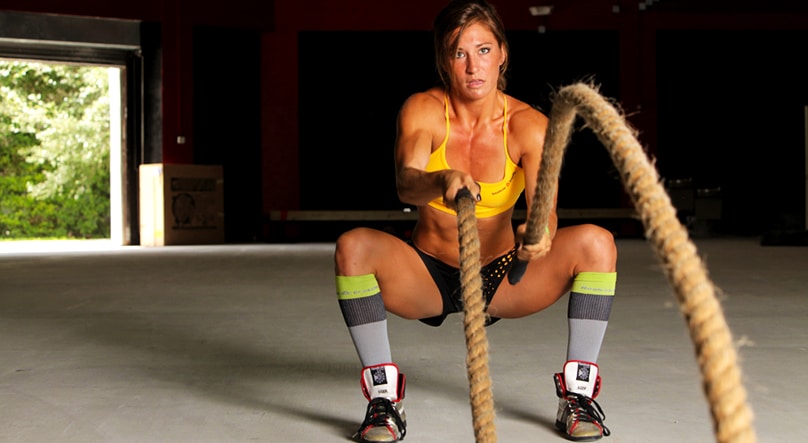 You may be surprised to learn that the rope is used for much more than climbing and pulling, as is commonly seen in CrossFit. In fact, there is a specific type of rope that has been developed to enhance an athlete’s grip, strength, and overall levels of work capacity. It’s known as the battle rope.

What are battle ropes?
The art of ‘battling rope’ was pioneered by John Brookfield, a strongman known for ripping 60 decks of cards in half in 60 seconds. Brookfield trained with battle ropes by maneuvering them in a variety of both linear and circular motions to create a peak heart rate in an athlete. Battle ropes are commonly used as a high intensity interval training (HIIT) tool to develop an athlete’s power, explosiveness, as well as their anaerobic and aerobic endurance.

Battle ropes come in all shapes and sizes, typically ranging from 26-50ft in length, and are anywhere between 1 to 2 inches thick. Their weight can vary greatly, depending on the length and thickness of the rope. When used in training, the rope is wrapped around an anchor point, and an athlete holds the rope at its end point, which is usually wrapped in thick tape.

1. Low impact training
Minimal stress is placed on the joints when using battle ropes, with all the force applied to the muscular system.

2. Unilateral dominance/imbalance
When you train with battle ropes, you may realize that one side of your body may move differently than the other. It may generate a smaller wave, be more uncoordinated, etc. One of the benefits of battle rope training is that over time, these differences will go away as your body starts to balance itself out.

3. Versatility
You can literally train with them anywhere. As long as you have enough space and a solid anchor point, you can do them at home, at the gym, or even outside.

4. It’s functional fitness
Battle rope training involves the entire body, training the neuromuscular system to apply force that begins at the core and extends through the extremities (both arms and legs). You’ll also develop a killer grip and increase your power output through exercises like power slams (see below). Furthermore, the high intensity, rapid nature of battle rope training means that you will develop an insane amount of muscular and cardiovascular endurance—not to mention burning a ton of fat in the process.

5. Helps to develop mental toughness
Developing mental toughness and learning to overcome obstacles are key attributes of successful athletes. When people start using the ropes, the idea of maintaining intensity over 1 minute seems like a pipe dream. Your lungs will be burning for air and the lactic acid in your muscles will make you want to cry. But with consistent training on the ropes, you’ll notice that your mental and physical thresholds have advanced further than you could have imagined. All of a sudden, Fran won’t seem that tough.

6. It’s fun!
While every WOD is different, the barbells and kettlebells can get a little boring. With battle ropes, you get to slam and twirl away to your heart’s content, all the while reaping the massive benefits from an impressive variety of exercises to choose from.

Power slams
Grabbing the ropes with a closed grip, get into a quarter-squat position with your arms at rest. With a rope in each hand, raise your arms, forcibly flex and extend your shoulders, and slam the rope as you squat. After you slam, extend at the hip and stand up, returning to the starting position.

Jumping power slams
Same thing as power slams, except now you’re going to explode out of the squat into the air, slamming the ropes to the ground as you come back down.

Snakes
In a quarter squat, swing your arms together side-to-side and make your rope slither like a snake.

Claps
In a quarter squat, move your arms in and out like you’re clapping your hands together.

Outside circles
Stand tall with a slight bend in your knees. Then, while gripping the rope, begin to make big circles with arm. Your right arm circles clockwise and your left arm circles counter-clockwise.

Jumping jacks
Starting with a reverse grip on the rope, ensure there is enough slack in the rope (you can create more by walking toward the anchored point). Next, simply do a jumping jack while holding the rope. Do as many as you can, building up to more repetitions each workout.

Double arm side-to-side shuffle
While in a quarter-squat stance, perform continuous double arm waves while shuffling side to side.

Figure eight circles
Start with a full stance but keep your knees bent, and be prepared to squat and stand in relation to the movement. Make a figure eight shape in the air while holding the ropes. Feel free to reverse direction in the middle of your round.