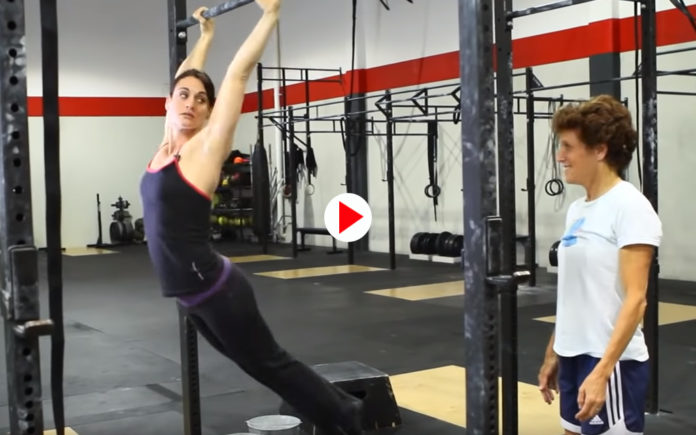 As a new CrossFit athlete, the first gymnastics movement I wanted to conquer was the kipping pull-up. I came into CrossFit with a fairly decent strength foundation, and my cardio eventually caught up, but finesse is not in my physical rolodex. I knew I had to put in extra work to improve my gymnastic skills. So, I bought a doorway pull-up bar and got to work. First: I made sure I could string a few strict pull-ups together. Then, I started scouring for instructional videos on kipping pull-ups.

None helped more than this 2012 CrossFit video featuring Cherie Chan, a Level 4 coach, member of CrossFit HQ Training Department and wife to Games athlete Matt Chan. In the video, Chan helps a woman, who I would consider older for the CrossFit crowd, get her first kipping pull-up. As an L1 trainer now, I appreciate Chan’s tactile, visual and verbal cues. As an athlete, I was pretty damn excited to get my first kipping pull-up after watching this video. (Also, check out those OG Reebok Nanos!)

Dead Bug to Superman
Chan first has the woman lie on the ground in a “dead bug” position: on her back with legs and arms in the air. From this position, she has her bring her legs and arms toward the groud while keeping her core tight. You might also recognize this as a hollow hold. She then has her roll over into a superman position, lying prone with legs and arms out. Chan then has her practice the bug-to-superman hanging on the bar, creating a tight kip swing.

Generating Hip Power
After she demonstrates a tight kip swing, Chan has the woman add in a small knees-up movement during the hollow hold as well as an aggressive push down on the bar. The woman first adds in the knees up, but looks loose on the bar. Chan shows her what she is doing and what she needs to do – activating the lats to push down on the bar, creating more upward momentum.

Jumping Over the Fence – Where the Magic Happens
This was it, folks. This was the tactile cue I needed to finally get over the bar. Chan explains that we’ve created energy by pulling the knees up and need to express that energy. She has the woman lay on the ground with her hands above her head, simulating the position on the bar. She then pulls her knees to her chest and points to her hamstrings, asking her to imagine there is a fence against her hamstrings, about a foot off the ground. She then tells her to “jump” over the fence, aggressively opening the hips and putting feet flat on the ground in one movement.

On the Bar Now
Chan puts her client on the bar and has her do this progression: forward-back (hollow to superman), forward-back-knees up, forward-back-knees up and pull. After a couple tries, she makes it over the bar, pulling aggressively. And, I’d like to say, so did I! Immediately after realizing what it feels like to pop the hips open, I was able to recreate this movement on the bar. I’ll spare you the details of me in my bedroom doorway celebrating to an empty house my first kipping pull-up. If a tree falls in the woods and no one is around to hear it…