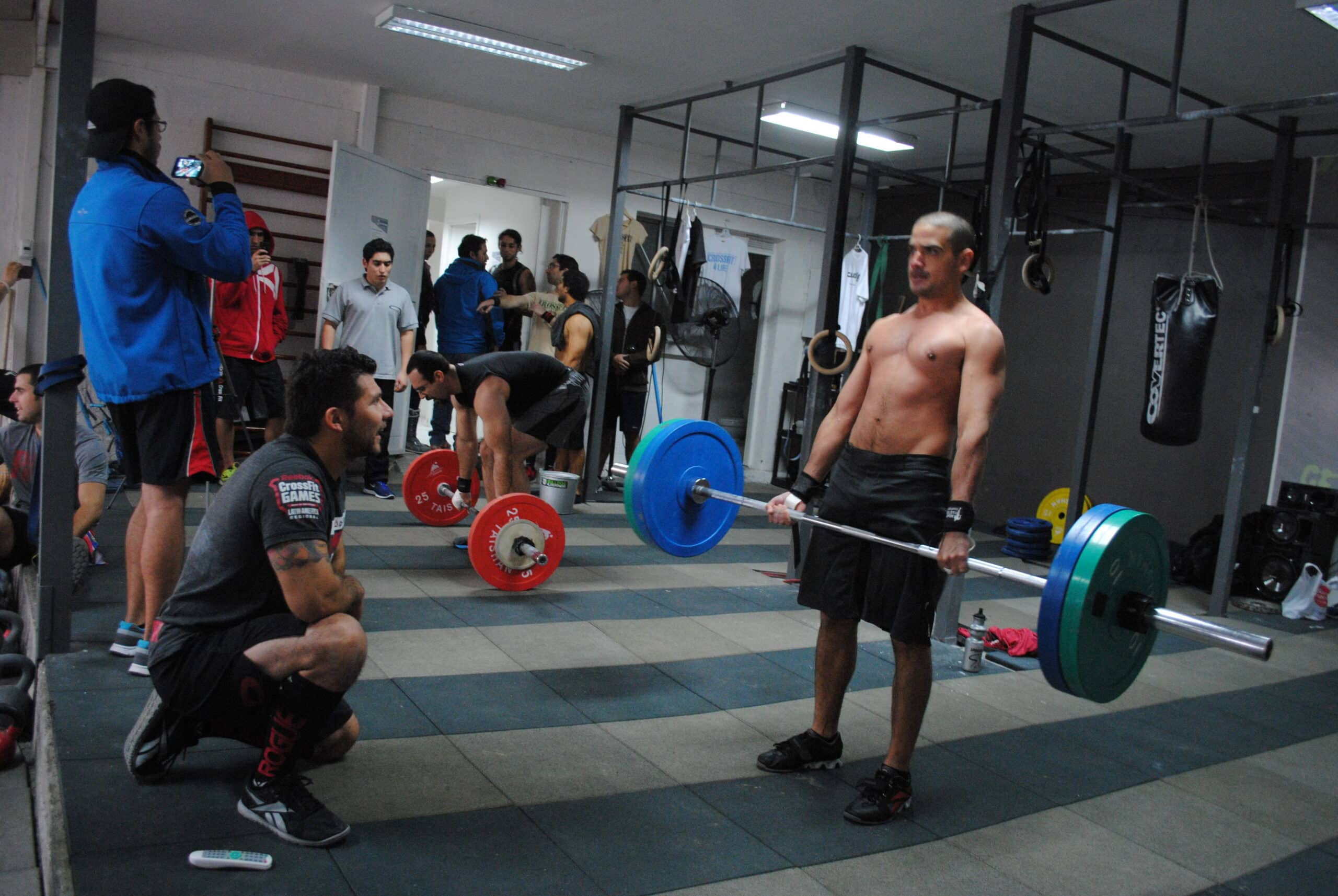 The start of the 2015 CrossFit Open is just a few weeks away, and we’re expecting more people to sign up and compete than ever before. However, for the CrossFit newbie the whole concept of the Open might seem foreign—but fear not! This article is going to tell you everything you need to know about signing up, registering for a division, logging your scores and more.

Purpose of the Open
The Open is the first qualifying stage of the CrossFit Games. Implemented in 2011, any athlete who wants to prove their fitness and compete at the Games must first make it through the Open in their region. The Open is comprised of five workouts over five weeks, and it starts with 15.1 (Open workouts are identified by their year and the order that they appear—so 14.1 was the first workout in 2014, 14.2 the second, etc.). The workouts will be released every Thursday during the five weeks of the Open, and you can watch the live announcement of the workout that will be streamed to Games.CrossFit.com. Dave Castro (Director of the CrossFit Games) will make the announcement at a different affiliate each week, and two athletes (or more, as was the case in 14.5.) will then perform the workout live. When the workout is released that Thursday, any athlete who has registered for the Open will have until 5 p.m. PT on the following Monday to submit their scores online (explained below). You can have as many attempts as you wish to complete the workout, but you must submit your best score by the 5 p.m. deadline on the Monday. And trust us, there is usually a traffic jam on the CrossFit Games website minutes before the deadline—so don’t wait till the last minute.

To advance to the next stage of the CrossFit Games season—Regionals—athletes must finish the Open near the top of their region’s leaderboard. The leaderboard tracks all of the submitted scores from Open competitors. The top 20 men and 20 women—and top 15 teams—from the U.S. and Canadian Regions will advance to their Regionals. For Europe and Australia, 30 men, 30 women and 20 teams will advance, and for Latin America, Asia and Africa, these numbers fall to 10,10 and 10.

While the purpose of the Open is to find the fittest athletes in each region to move on to the Regionals, it’s also an opportunity for any athlete at any level to participate in the competition. For many people, it can provide them their first taste of competing in a CrossFit ‘event’, and the Open season generates a huge buzz of excitement across the affiliate community worldwide. Most people know that they won’t be making it to Regionals, but the fact that you know that you’ll be performing the same workout as Games athletes—not to mention every other Open participant in the world—is exciting and adds an extra element of fun to your week at the box. It gives you an opportunity to see where you stand with your fitness—not just in your home box, but against athletes in boxes across the globe. And with the addition of scaled workouts and Teen divisions, the Open is now more inclusive than ever before.

Registering and divisions
Once you’ve made the decision to sign up, you can head to the CrossFit Games home page where you will see a big hyperlinked banner in blue that looks like this:

Once you click that hyperlink, you’ll be directed to a login page where you will be prompted to enter your existing CrossFit ID (from a previous year’s Open, Judges Course, or a seminar registration). If you don’t have one, you’ll have the option to create an account. Once that’s done and you’ve logged in, you can complete a four-part questionnaire that will allow you to register for the Open. You’ll be asked for your date of birth, which country you’ll be competing in, and a $20.00 fee to compete. You’ll also be prompted to select your division, which is going to be either “Male” or “Female”. However, if you’re between the ages of 14 and 17, you can compete in the Teenage division. The division will have two sub-groups: 14-15 and 16-17. Teen competitors will perform a different version of the Open workout than the adult male and female competitors, and the winners of the division will be crowned after the fifth week of the Open. Lastly, if teen competitors want to qualify for Regionals—as a team or individual competitor—they must change their division by emailing support@crossfitgames.com before the end of score submissions for Open Workout 15.1.

As has been the case in previous years, there will be a Masters division for athletes who are 40 or older. These athletes will be automatically entered into one of five age divisions—40-44, 45-49, 50-54, 55-59, 60+. In order for Masters athletes to advance to the next qualifying stage of the Games—the Masters Qualifier—they need to finish among the top 200 people worldwide in their age division. The online Masters Qualifier will be held April 23-27, and the top 20 from this competition will be invited to the CrossFit Games.

Any athlete who has registered for the Open can join or create a team through their competition page, shown here:

Be aware that you still need to join an affiliate before you can join a team. Once you’ve done that, you can click “join a team”, and then be brought to a page where you can either join one of your affiliate’s existing teams, or create a new team for $20. If you create a new team, you will serve as the Team Manager.

Lastly, every athlete competing in the Open has the option of performing a scaled version of the workout in any given week.

“For the first time, scaled versions of the week’s Open workout will be available so athletes can choose the programming that best matches their abilities.”
-CrossFit Games

When an Open workout is released every Thursday, athletes will be able to go on to the Games site to see both the prescribed AND scaled versions of their division’s workout. Each scaled workout will have specified standards for each movement, and athletes who choose to complete a scaled workout will have to meet these standards—and cannot scale or modify further. CrossFit’s intent with these Scaled workouts is to allow every athlete the chance to compete at an appropriate level, so if you do decide to scale one week that won’t prevent you from performing the next week’s workout as prescribed. However, one rep of the prescribed version of the workout will be ranked ahead of the best score of the scaled version of the workout, so that’s something to keep in mind if you are trying to challenge someone at your box.

“Those athletes who choose to do all five Open workouts scaled will be visible on the Scaled Leaderboard, where they can compete with their peers.”

Any athlete that does scale a workout will be removed from contention for the Regionals and/or Masters Qualifier, so it goes without saying that the scaled workouts are for people who have no intent of trying to get to the next stage of the CrossFit Games season.

Completing the workouts and submitting your scores
You have two choices when it comes to performing an Open workout: You can either perform it at a participating CrossFit affiliate where you will be judged in person, or you can do the workout on your own and film it before uploading it to YouTube or another video-sharing site—per the CrossFit Games instructions. Until your score is validated—either by video submission or by an affiliate manager—it will appear as grey online. To submit your score, go back to the competition page and click the tab titled “Submit 15.1, 2, etc. Score”.

It goes without saying that serious athletes who are looking to make it to Regionals will likely film their workouts AND have a qualified judge counting their reps before posting their score online. That way, they can be sure to have ‘ticked all the boxes’ and present a score that is accurate and won’t be questioned by the CrossFit Games staff. If CrossFit sees an athlete that posts five Open workout scores that qualify for Regionals without an accompanying video, they may contact that athlete for further evidence of their performance.

But if you’re like me, and you know that you won’t make Regionals, then you don’t have to worry as much about taping your workouts or having a qualified judge count your reps—a fellow athlete (who knows the movement standards) can do it. However, don’t be a dick and post scores that are false. The Open is about good sportsmanship and testing your fitness against others, so adhere to that philosophy and do the best that you can.

So what are you waiting for? Sign up for the 2015 CrossFit Open now!