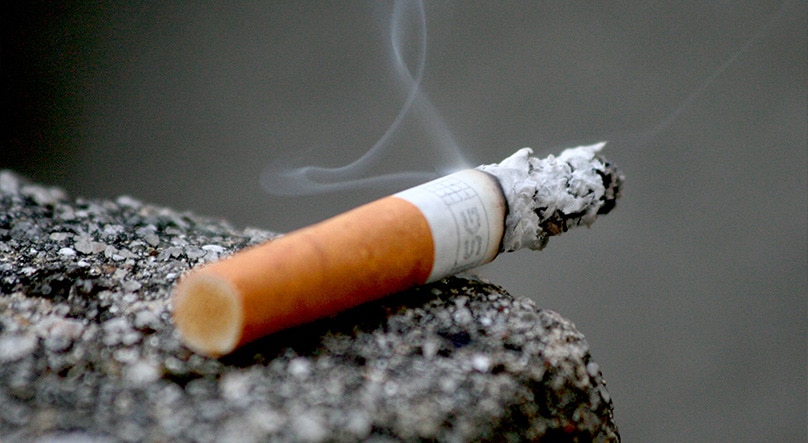 There was a time when smoking used to be thought of as a ‘cool’ thing. Doctors would even recommend it as a means of calming anxiety and stress. Thankfully, modern medicine caught up with the times, and now smoking cartons carry the ominous message: “Smoking Kills”

So, while we all know that smoking is incredibly dangerous to our health, you might be curious to see just how these little soldiers of death can destroy your fitness and your body.

Severely impacts fitness
On top of the increased likelihood of developing life-threatening diseases, numerous studies have shown that smoking can negatively impact an athlete’s fitness in a variety of ways. Smoking damages the heart and the lungs, which is bad news for an athlete’s cardiovascular fitness. This is because in order for your body to operate efficiently, your heart, lungs and muscles need blood that is rich in oxygen—as well as other beneficial nutrients. But, as the Cleveland Clinic points out, “when you inhale tobacco smoke, carbon monoxide (just one of the 4,000-plus chemicals found in tobacco – more than 50 of which are known to cause cancer) binds to red blood cells, displacing oxygen which prevents its delivery to the muscles and other body tissues.” As a result of this ‘binding’, there is an increase in lactic acid—which is what causes muscular fatigue (as well as that nasty burning sensation in your muscles), inhibits your breathing and makes the delayed onset of muscle soreness more severe.

With less oxygen circulating throughout your body, your physical endurance takes a massive hit—not to mention your strength. Your muscles need oxygen in order to execute the necessary energy transaction to push, pull or press against a resistive force. Try executing three sets of three back squat reps at 70 % of your one-rep max while holding your breath, and you’ll soon get the picture. In addition, smoking increases the levels of the stress hormone cortisol, which is attributed to increasing blood pressure, cholesterol, weight gain, as well as lowering immune function and bone density. In fact, there are numerous studies that show a link between smoking and an obvious reduction in muscle strength and even muscle flexibility.

Lastly, in a recent study of 298 young adults, the resting heart rate of a smoker was found to be significantly higher than that of a non-smoker. A faster heartbeat means higher blood pressure, which results in a reduction in blood flow throughout the body. Having good blood flow to carry nutrients to your systems is vital for both exercise and operating efficiently throughout the day, so any impingement on that is going to severely reduce your athletic performance.

Increases risk of Respiratory Illness
Cigarette smoke contains a ton of tar that settles in the lungs, hampering your airways and affecting the amount of oxygen that gets absorbed into the bloodstream. In addition, smoking promotes the production of mucus in the lungs by damaging the cilia (hair-like structures that clean out the mucus and toxins in our airways). So with more mucus sitting in the bronchial tubes, the lungs are increasingly susceptible to develop infections, not to mention the risk of chronic obstructive pulmonary diseases such as emphysema and chronic bronchitis—which can result in death. These respiratory infections, in simple terms, make it hard to breathe.

So how can CrossFit help?
Obviously CrossFit is not a program designed to make people quit smoking, but it can provide a wake-up call to those athletes who do smoke and promote healthier habits. Struggling through a warm-up, coughing up phlegm and taking hours upon hours to recover from a workout can show a smoker just how unhealthy they are, and provide them with new challenges to break their damaging routine. As we all know, CrossFit can become an addiction—but in the case of a smoker, it’s a far more healthy drug than tobacco is.