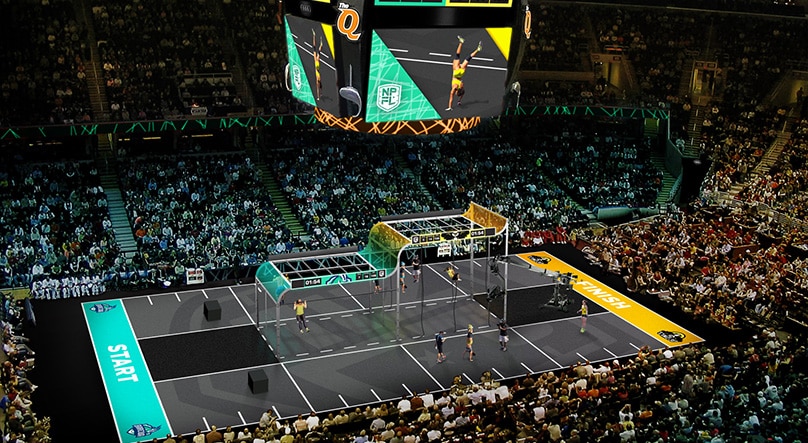 In the world of fitness competitions, the CrossFit Games rule all. Yes, there are other major national competitions, like the OC Throwdown and Wodapalooza, but the one event that the entire community knows about (or should know about) is the CrossFit Games. But what if I were to tell you that the playing field might be shifting? What if we were about to see the emergence of a rival competition? Well, enter the National Pro Fitness League.

The mastermind behind this venture is Tony Budding, former director of CrossFit Media and one of the original members of the CrossFit HQ team. Now, for those of you who aren’t aware, Budding announced in December of last year that he would be leaving CrossFit to start his own venture, the National Pro Fitness League (NPFL). Billed as the “world’s first professional spectator sport with co-ed teams competing in human performance races”, Budding is attempting to create a “season” of “fitness matches” (the NPFL is careful not to use the word CrossFit) that is “not unlike an abbreviated NFL season”. Unlike the CrossFit Games, which is essentially a fitness competition where only the winners of the events (and overall contest) are paid, the NPFL will be attempting to make their athletes salaried professionals. Since we anticipate that the majority of these athletes will be current CrossFitters (or have CrossFitting backgrounds) this could be a major step in taking our sport into a professional setting. So, how would the NPFL work?

Teams
In it’s inaugural year, the NPFL will be made up of eight teams “to keep things simple”. Budding and the NPFL want their teams to be geographically diverse, and this is reflected in the current line-up (there are currently five official franchises):

Each team is separately operated by for-profit entities. For example, the Firebreathers are owned by Human Potential Management, Inc. So, like in other professional sports, teams are free to sign and pay their athletes (as long as the contracts are legitimate). Here are the other important facts to note:

Each team will be responsible for their general admin, player costs, game day costs, local media and content creation, and their participation in the Combine/Draft (more on that shortly). The details on how the season will work are still a little unclear—there doesn’t seem to be any mention of how a team would “win” the league, whether this would be through a playoff format or final position in the league at the end of the season.

“Matches”
Teams in the NPFL would compete head to head in matches or races throughout the course of the season in the following format:

You can see what Budding is trying to accomplish here, as these workouts will definitely be calling for strategy, practice, and in-game coaching—much like a game in any other pro sport league. And, through the design of the court, it will be easy to see who is in the lead, at what stage, etc. However, at this point the specific rules are still slightly confusing (despite my awesome explanation).

The Combine/Draft
As I’ve said, active teams are made up of 7 men and 7 women. Teams will be able to sign 4 men and 4 women on their own initiative (which is going on as we speak—more on this below). The remaining 5 spots on the team (3 active and 2 inactive athletes) have to come through the combine and draft process. As Budding has said, this is the NPFL’s first step towards enforcing parity to prevent teams from forming “super-teams” made up of star athletes. Here is how the combine and draft will work:

Phew! That’s a lot of information, but it’s great to see that the NPFL wants to make their competition open to the average Joe of the sporting world. Having the chance to rub shoulders with some big names will surely be a dream come true for many, and teams have wasted no time in snatching up some of the highest profile athletes in our sport…

The Athletes
The NPFL is careful not to mention CrossFit as the league’s focus on the site, but based on the early sample workouts that have been released, it’s quite clear that athletes with CrossFit backgrounds will excel in this kind of workout format. With that being said, it will still be cool to see former professional athletes from other sports joining the league and competing. Indeed, the prospect of having a professional sporting contract will be incredibly enticing for many current CrossFitters, and this has already proven to be the case, based on the names that have already signed contracts with teams. These include:

As I mentioned in the introduction, for the first time “CrossFit” athletes (again, the NPFL doesn’t use that term, but it’s a safe bet most of their athletes will be CrossFitters) will become paid professionals upon signing with an NPFL team. The details on how much each athlete will be compensated are still unclear, but we do have this information, taken from the NPFL website, in regards to athlete salaries:

“For each match, teams will “dress” four men and four women, with at least one of each being over 40 years old at the time of competition. Only these eight athletes will be allowed to compete in the events for that match. Teams may only “dress” athletes from their active roster for each match. The minimum compensation for each “dressed” athlete is $2,500 per match. On top of the 14 active athletes, each team will have two men and two women on their reserve list. Each of these athletes will be formally signed and receive payment of at least $100 per year, even if they never get called up.”

There are obviously still a lot of questions surrounding the NPFL, and considering this is a brand new sporting league and competition, this is only natural. We know that the league is expected to start late August 2014, will be aired live, and some sponsors already include the likes of Eleiko. Budding is obviously hoping that the close ties that the format of the NPFL will share with CrossFit will attract a lot of attention, both from the community and sponsors. And as we can see from some of the athletes that have already signed contracts this certainly seems to be the case. There is a lot of potential for Budding and the NPFL, which could shake up the CrossFit landscape in the coming months and years. Whether this will be good or bad for our sport remains to be seen.