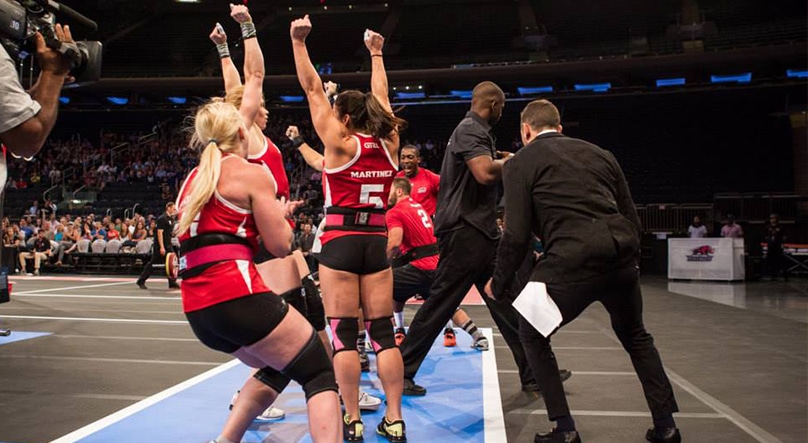 On Tuesday night the Los Angeles Reign took on the New York Rhinos in the very first game of the National Pro Grid League (briefly known as the National Pro Fitness League). The world famous Madison Square Garden (MSG) hosted this historic event, in which the Rhinos and Reign battled it out over the course of 11 races, with the Rhinos taking the win 20-15. So, what were our observations from watching the first official Grid match?

1. Excitement amongst the crowd and the athletes
The NPGL made a brilliant move when they secured MSG as the venue for their opening match. There are few better stadiums or indeed cities in the world to host a sporting event, so it was plain to see the excitement on the faces of everyone in attendance as the national anthem was sung and the starting line-up announced (yes, a starting line-up!). Obviously, the NPGL is a brand new sport, so MSG was not sold out. However, a solid number of fans (official figures haven’t yet been released) made themselves heard. The lack of a sell-out meant that spectators were able to get much closer to the action to see some familiar names in action. Lindsey Valenzuela, Kenny Leverich, Tommy Hackenbruck, Annie Thorisdottir, Kristan Clever, Mat Fraser and Noah Olson have all made a name for themselves at the CrossFit Games, but the NPGL has provided an opportunity to see them compete with and against one another as professional athletes on professional teams. I must say, it was pretty cool to see ‘Valenzuela 11’ on the back of one Under Armour-made Reign jersey.

2. It looked and felt like a genuine game
As mentioned, holding the opening game of the NPGL in Madison Square Garden will do wonders to help legitimize ‘the Grid’ as an official sport—not to mention generating a massive amount of interest. But I was further impressed by evidence of the professional organisation that had gone into the event. Each race had referees (not ‘judges’; these are paid officials) decked out in all-black, substitutions and athlete transitions came thick and fast, and all the while Ian Berger and Dusty Hyland, coaches of the Rhinos and the Reign, patrolled the sidelines, barking out tactics and instructions—just as you’d see in other more established sports. There was an abundance of infographics, including a box score that was a permanent feature at the bottom of the screen, letting the viewer know how many reps a team had yet to complete and how far they were ahead or behind. And what sporting competition would be complete without a little controversy? On several instances following questionable ‘calls’, both coaches threw a red ‘challenge flag’ on to the floor and the incident in question was taken to a review, similar to what happens in the NFL.

3. The match was occasionally hard to follow
I don’t want to be too harsh in my criticism of the NPGL’s first match, as we should all remember that this is a brand new sport (only 8 months old), so mistakes are going to be made, as CEO and Grid founder Tony Budding admitted. That said, there were a few elements relating to the set-up of the races that, at times, made them hard to follow.  The first was keeping track of what each team was expected to do for each race. Though the variety of the races made for great entertainment, the rules and format of the race were briefly displayed in an infographic before the action got underway. If the spectator had a good memory and some knowledge of each movement and similar workout formats from his or her experience in CrossFit, this wasn’t a huge problem, but for the newcomer to this type of functional fitness (not to mention the completely uninitiated), it would be easy to get lost. With athletes transitioning from movement to movement and subbing in and out quickly, there were times when I felt confused about how many reps each team had to complete in certain sections of the race. This may be difficult for some, but I’m sure fans will become familiar with race formats as the season goes on. In the meantime, it would be useful for the race rules to be presented on screen for a longer period, and occasionally have pop-up infographics mid-race to remind the viewer of what’s going on rather than having to rely on the commentators’ cues—though they did an excellent job of explaining things.

This is especially paramount for when the ‘challenge’ and ‘bonus’ flags come into play. At the beginning of the game, it was explained that each coach had a white flag that could be used to add a bonus point to any race (limited to a single use by each coach during a match). The winning team for that particular race would receive an extra point, regardless of who threw the flag. The red challenge flags were used by both coaches on Tuesday night to challenge calls made by the officials during the course of a race. From the Grid online rulebook:

‘If a coach decides to throw a red challenge flag, the race does not stop but continues through to completion. Once the race is over, the head referee will make a ruling regarding the challenge and has the ability to use video to review the call if necessary.

If a challenge is upheld, the coach will retain his challenge flag, and each race will be restarted from an established point. When a coach loses a challenge, the outcome of the race will stand and the coach can not challenge subsequent races.’

Sounds similar to the challenge flags used in the NFL, and I think most people would agree that they add an element of drama and fairness to that sport. The problem that became apparent during the Rhino vs. Reign game was that the review process took far too long. Players, fans and even the commentators were left to deliberate what was going on as the broadcast had to continue to cut to commercial before an official decision was made. Clearly, this process needs to be thoroughly streamlined and there needs to be an official announcement on the final ruling, so that everyone knows the reasoning behind the decision.

4. The presentation/broadcast needs fine tuning
The match was streamed live on the Grid website, so I knew not to expect ESPN/NBC-broadcast quality when I tuned in for the action. However, there were long stretches between races where a commercial would be played (promoting the NPGL or a fitness-style product), and then it would cut back to MSG and a shot of the Grid court, except nothing was happening—aside from NPGL staff preparing the court for the next race. Instead, we were treated to some side commentary from Grid media staff as they discussed what they would be talking about when they came back from commercial. Obviously, that’s not what the viewer wants to be hearing. However, there were occasions when the transition from action to commercial back to action was seamless, suggesting that this isn’t the most serious of issues and the league are just going through a natural learning curve.

5. It was entertaining!
The NPGL has generated a lot of interest among the community. Some people questioned whether a Grid match would actually be fun to watch. As an impartial viewer and a lover of sport, I can honestly say that I enjoyed watching each one of the 11 races on display. As mentioned, the variety from race to race (including a clean ladder, a snatch/box jump-over combo and a nasty mix of deficit and freestanding handstand push-ups) kept my interest throughout the match, and some of the performances from the athletes were incredible to watch. Irving Hernandez in particular put on a show when he cranked out 40 unbroken chest-to-bar pull-ups in races 5 and 6, and blew through 90 double-unders at lightning pace in the final race of the night. The strategy of each team also had an impact on the outcome of several races, as coaches jostled and changed their line-ups mid race to try and gain the upper hand. And despite the drawn-out process behind the challenge and bonus flags, these added an element of drama to the event as a whole. Simply put, the fact that I stuck around to watch the whole game (which went on for over 2 hours, no thanks to those flags) shows that it was an entertaining spectacle, which is the main point of the NPGL—this is a pro sport after all: if it can’t take care of its fan base, than it won’t get past year one. But on the basis of game 1, I can’t see that happening.