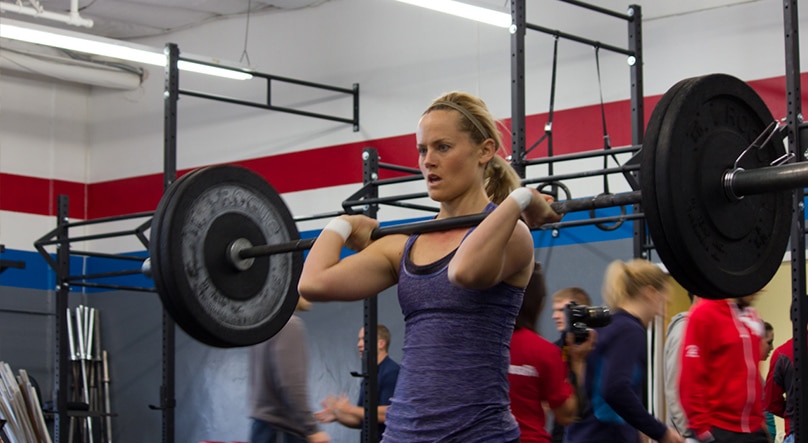 2015 is going to be a landmark year for the CrossFit Games. The qualifying process for both the new ‘super Regionals’ and the Games has been completely revamped, there is a new Scaled and Teen division and for the first time in four years someone not named Rich Froning is going to win the title of Fittest Man on Earth.

With the inclusion of the Scaled division, there will now be more opportunities for athletes of all levels to participate in the Open. Even the ‘casual’ CrossFitter—the athlete who simply participates in CrossFit for their health and fitness—can be tempted to join in with the fun; the question is, why should they? The Open is a time when “CrossFit—the training methodology” and “CrossFit—the sport” merge together. Yes it’s a competition, yes it’s designed to be fun, but it’s also a great way reach your health and fitness goals. In fact, there are several reasons why anyone and everyone (including you) needs to do the Open.

1. Provides you with a benchmark of your current level of fitness
The Open contains some of the most challenging workouts you will ever be exposed to. It’s not only a measure of where you stand in your CrossFit abilities, but also an excellent test of your general physical preparedness—i.e. your current level of fitness. The toughness of each Open WOD is a great way to measure how far you’ve progressed from year to year, seeing as how it’s designed to test multiple elements of an individual’s fitness. Your strength, stamina, speed, mobility and skill will all be put to the test. You may even be able to achieve new movements and weights that you had previously thought unattainable. Once you complete the five workouts of the Open, you’ll be able to look back at your performances and know that you have set new benchmarks for yourself in all areas of your fitness.

2. Highlights your weaknesses
A major goal of the Open is to expose an individual’s weaknesses. The organizers of the Games are trying to trim down the athletes to find the fittest men and women each year, but even if you don’t intend to ever ‘compete’ in CrossFit it’s still incredibly useful to know where your weaknesses lie. Part of the process of developing your fitness and becoming a better athlete is through identifying which areas are limiting your progress the most. Participating in the Open is a great way to achieve that, because you’ll be hit with a different test of fitness from week to week. Whether it’s gymnastic skills, strength, endurance or Olympic Weightlifting, your weaknesses will become immediately apparent to you as you’ll shine in some of the workouts and likely bomb other ones. You can then come away from the Open with that knowledge and develop a plan with your coach to turn those weaknesses into strengths, and become a fitter athlete as a result.

3. Helps set goals
One of the most important aspects of having a S.M.A.R.T. goal is that you make it timely. That is to say that the goal should be grounded within a time frame—otherwise where’s the sense of urgency to complete it? Well, what better time than the CrossFit Open? Just as the Open can be used to set benchmarks and measure your progress from year to year, it can also serve as an opportunity to create and achieve various fitness goals that you have set yourself. You may want to lose 10lbs by the conclusion of the Open, eat clean for the five weeks of the competition, PR a certain weight or movement, etc. It’s a great platform with which to test your fitness on an annual basis, and the fact that it’s a unique and special competition should encourage you to use it as a deadline for achieving your goal(s).

4. Increases motivation
Everyone’s desire to workout and get fitter can dwindle. It’s hard to maintain the energy and enthusiasm for eating clean, working out regularly and spending the necessary time to become a healthier person. Every year, people succumb to the CrossFit burnout. The Open provides a change of pace to your regular schedule and can reignite your motivation to become fitter, healthier, faster, stronger, etc. You’ll know that for five weeks there will be one special workout that thousands of other athletes around the world will be attempting to complete. Use the Open to reignite your motivation to reach your goals—not just for the five weeks the Open lasts, but for long after that.

5. Promotes camaraderie
Every CrossFit workout is tough, but an Open workout is one that you get to share with thousands of other athletes around the world—not to mention the people in your box! This is a unique element of the Open, amplified by the fact that you can also post your scores from each workout online so that you can compare yourself against the other Open competitors at your box and around the globe. That is certainly something you don’t get to do every day, and as such, it places extra ‘weight’ on each one of the five Open workouts. Now you’re not just comparing yourself to other people in your gym, you get to evaluate your fitness against athletes from all over the world. And because each Open WOD is special in that sense, you can strategize with other athletes in the box to try and develop a game plan to produce your best score. You can pull tips from people who have already performed 15.1, and in turn pass on your advice after you perform the workout yourself (unless of course you want to keep those tips and tricks to yourself). This competitive spirit and the knowledge that you’re competing against thousands of other people doing the same workout helps to promote an air of friendly competition and camaraderie at the box.

6. It’s a great way to enjoy the thrill of competition
At the end of the day, the purpose of the Open is to give CrossFitters around the globe the opportunity to compete. As the CrossFit Games site states, “The intent of the scaled workouts is to allow everyone who wants to compete, to compete at an appropriate level.” As a fitness enthusiast but casual CrossFitter, perhaps you have always been apprehensive about joining your affiliate team for a local throwdown or competing in a CrossFit-style competition. But by signing up for the Open, you’ll have the opportunity to compete in the familiar surroundings of your home box, and you can fit the workouts around your schedule. I’m sure that your curiosity will get the better of you and you’ll take a look at the leaderboard to see where you stand against the other athletes in your box—and the world. Who knows? After the Open you might be so fired up from the experience that you’ll be signing up for the next local competition you can find. But of course, as with anything, you’ll only be able to experience all of this if you first make the decision to try.

7. It’s fun!
As you may already know, each live announcement of the Open is a show in itself. The Open has evolved to become a form of entertainment for the CrossFitter, with much secrecy leading up to the workout before it’s announced in front of two elite athletes and a box full of eager fans making a lot of noise. No one knows what they’re going to be hit with. It could be a couplet of movements that are right in their wheelhouse, or a monstrous metcon that makes even the most elite athletes sick to their stomachs. But for five weeks, you’ll be able to test your fitness in unique workouts, achieve some of your goals, boost your desire to become fitter, make new friends and experience the competitive side of the sport. Now doesn’t all of that sound like fun!? But there’s only one way you’ll get to experience all of that—by signing up for the 2015 CrossFit Open!