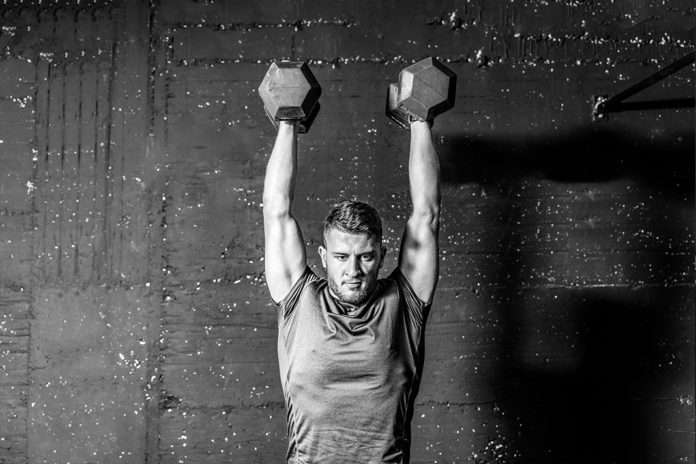 While most CrossFit athletes know their PRs in the squat, deadlift, snatch, and clean and jerk, few probably know how much weight they can strict press overhead. Is it because they just don’t consider overhead pressing strength that important? Probably not. It’s more likely due to the fact that many athletes simply don’t place enough attention in their training to strict strength. However, it’s the strict press that forms the foundation for all pressing movements—which includes exercises such as the push-up, bench press, and handstand push-up. So, what’s the value in improving our pressing strength, and how can we go about making it happen?

Improved strength
The clean and press used to be the first lift in Olympic Weightlifting and was once deemed the movement that could best identify an athlete’s strength and power. If you want to be impressed, YouTube Belgian weightlifter Serge Reding clean and pressing 502lbs!

Since the 1970s, the clean and jerk is now recognized as the most efficient way to get heavy loads overhead. The primary reason why a strict press is such a valuable tool for improving strength is that it is a compound movement, which means that it involves more than one joint (and therefore more than one muscle group). In the strict press, the elbow and shoulder joints are doing most of the work, which means the surrounding musculature—the biceps, triceps, pecs, and muscles of the rotator cuff—are all being put to work simultaneously. When multiple muscles are worked in a lift, your body secretes higher levels of testosterone and human growth hormone—which are both vital for muscular development. And, the more muscles you can put under active mechanical tension, the greater impact you’ll have on the hypertrophy of said muscles. In addition, consider the muscles that must work to stabilize your torso as you press and hold weight overhead. Your quads, glutes, abs, and traps must all be engaged to stabilize the knees, hips, and back. Needless to say, the press targets a huge amount of musculature, which means that as you get stronger in the press, you get stronger overall.
Has tremendous carryover to other movements

By getting stronger in the press, you’ll see improvements in the push press and push jerk, push-ups, handstand push-ups, and the bench press, to name a few. It’s also a great movement to help you in sports where you are required to transmit force from the ground through to your hands—like blocking and tackling in football and rugby, hitting a serve in tennis, or throwing a baseball.

Highlights imbalances in shoulder and back strength
Unlike the bench press—which has (perhaps erroneously) become a far more popular exercise—the strict press is done in a standing position, which means your back has no object to use for support. In fact, the bench press can mask imbalances in your back and shoulder strength because of the stabilizing platform you’re lying against. But you have no such luxury in the overhead press, which is why so many athletes get confused when they can’t press 35% of their bench. The press also helps keep your anterior and posterior shoulder strength in balance.

Can help protect against injury (when done correctly)
Quick history lesson. In 1972, the International Olympic Weightlifting Committee voted to eliminate the press from official competition, citing the lift was causing a large number of back injuries. But, according to the late weightlifting coach and strength legend Bill Starr, the real reason was that “the judges at international contests were using the press as a political tool against their hated rivals.” Starr provides a fascinating read on the topic, but essentially Olympic Weightlifting started to see a flurry of crooked judging centering on the press, with judges allowing “ridiculous backbends” to pass when they should have been flagged as a failed lift. The point I’m trying to make is this: when bad judging allowed lifters to press weight by hyperextending their back, the press got a bad rep as a movement that could cause injury. And it can cause injury if performed incorrectly. But when done properly, the press can help protect the shoulder joint from injury by strengthening the rotator cuff, scapula and upper back.

A 4-week Plan to Increase Overhead Pressing Strength
The goal of this 4-week plan is simple: to improve your overhead pressing strength. Every week you’ll complete two sessions, each about 30-45 minutes long. Try to keep at least two days between each session; you can follow the program Monday and Thursday, for example. There are no percentages in this program. Lift as heavy as possible with good form for the prescribed number of reps. If rest time is not specified, rest as long as needed. And of course, be consistent and follow through until the end of the four weeks. It will pay off! 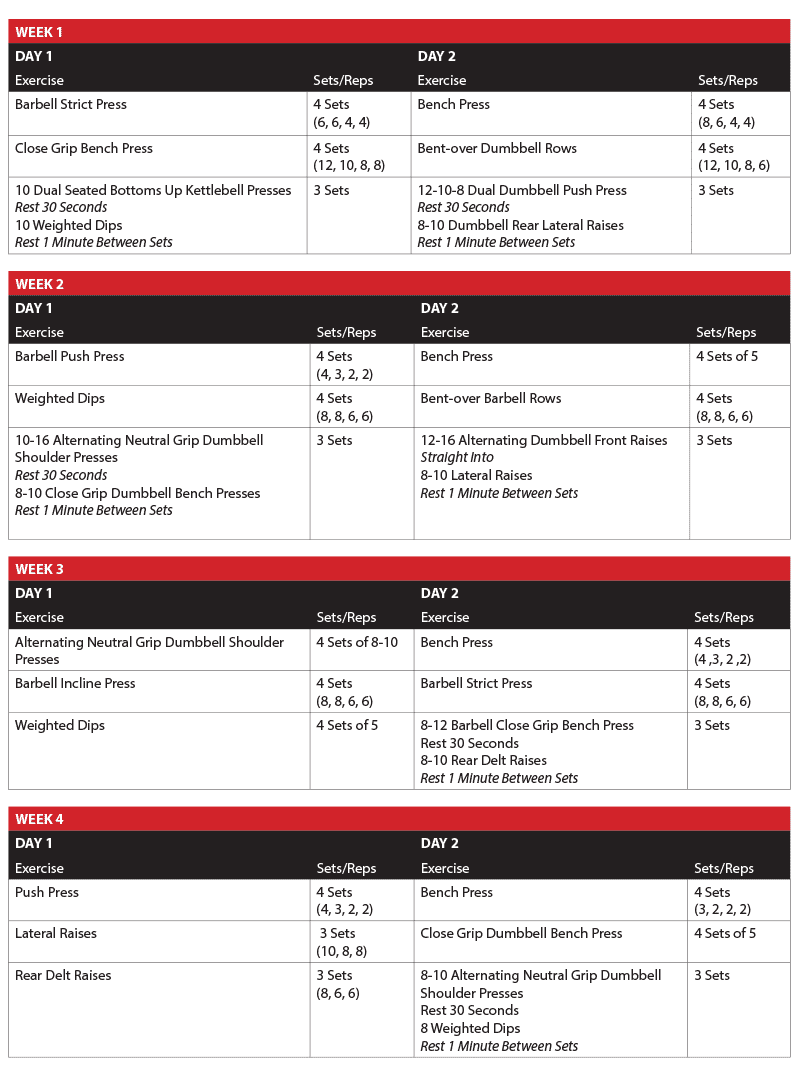