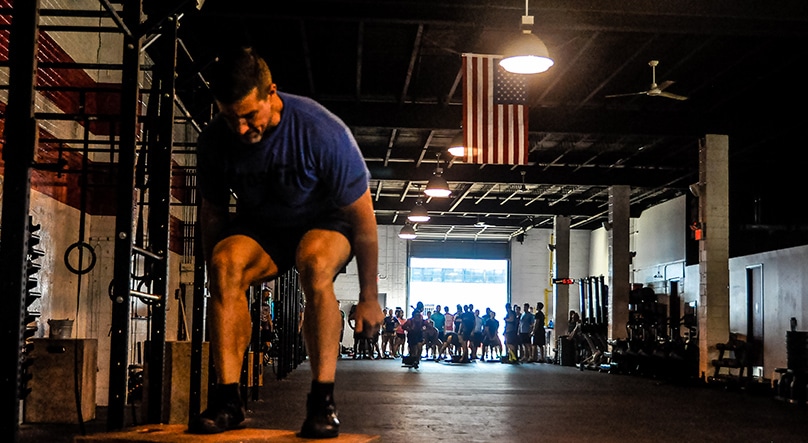 Do you have friends and family who are threatening to put you in rehab because you have some sort of “addiction to CrossFit?” And you would disagree, but you’re too busy watching a YouTube video of CrossFit Games highlights to do anything about it.

Well, there may be more truth to your friends’ concerns than you think.

Studies show challenging activities that result in progress and achievements, or what the savvy folk call ‘gamification’, chemically stimulate the brain in many of the same ways drugs do. And when you take away the terminology, programming and philosophy, all CrossFit is is a game; a really fun game.

People today love games because most of us have the tendency to get bored really easily. Luckily for us, we’ve conquered boredom with the power of gamification – and many businesses are catching on. The gamification market has grown exponentially in the last two years and is expected to reach $5.5 billion by 2018.

It’s taking over your life, people! So much so that some researchers say it may actually be altering our brain structure in a way that can make us feel obsessed or addicted.

“Unfortunately, most games these days (like Candy Crush Saga) are simply focused on escapism – wasting your life away on something that doesn’t improve your own life,” says Yu-kai Chou, a pioneer in the gamification industry. “Imagine if there was a truly addicting game, where the more time you spend on it, the more productive you would be?”

While developers are riddling our Facebook streams with gamified time wasters, and business-minded visionaries like Chou are bringing these motivators into the workplace, I think we’ve already stumbled upon a super productive and healthy addicting game: CrossFit.

According to Chou, successful and engaging gamified activities have 8 core drivers, all of which pretty accurately sum up what makes CrossFit so addictive for many of us:

• Meaning: When the player believes that he’s a part of something that’s bigger than himself

• Empowerment: When the player has to figure things out and try different combinations to see an improvement

• Social pressure: When you see a friend that is amazing at some skill, you become driven to reach that same level

• Unpredictability: If you don’t know what’s going to happen next, your brain is engaged and you think about it often

• Loss and avoidance: Something negative happens if you stop playing the game

• Impatience: The fact that people can’t improve right now motivates them to think about it all the time

• Ownership: When players feel ownership, they innately want to make what they own better

Sure, CrossFit’s main purpose is to help you lose weight, build muscle and bust stress out of your life, but so can regular ol’ jogging, weightlifting and Pilates. Those activities worked fine for years, but none have taken off in popularity like CrossFit has. Why is that?

It’s the chemicals in your brain, man.

CEO of Gamification Corp. Gage Zichermann explains that “any time you challenge yourself to something . . . it doesn’t matter how big or how small, and you achieve that thing, your brain secretes a magical little bit of a neurotransmitter called dopamine. And dopamine is a very pleasurable experience.”

So every time you beat the clock, hit a new PR or even accomplish something small like running a mile without walking, you’re essentially releasing chemicals into your body that make you say, “yea baby, let’s do it again!”

This chemical release also creates a chain reaction of other benefits.
Neuropsychologist Ian Robertson developed another construct called the Winner Effect: as you engage in the challenge+achievement=dopamine loop more and more, you’ll also start secreting testosterone in connection with the loop. When dopamine goes up, testosterone (which is the primary hormonal driver of muscle growth) will be rising simultaneously. Vice versa, if you’re low on dopamine, your testosterone levels will be at a similar level.

So, the bottom line is that you can literally be addicted to CrossFit. But that’s not all, folks.

In addition to increasing testosterone levels, growth hormone will also rise in correlation with increased dopamine secretion. Growth hormone is one of the most anabolic hormones (responsible for muscle growth) that’s found in the body.

So to all of the game developers out there—go home, everybody. The best game ever has already been created and nothing you ever make will be quite as impressive.

WODS are fun and healthy, they challenge you to achieve physical and mental goals you never thought possible, and the pleasurable feeling you get following a successful workout releases chemicals into your brain which actually help you burn fat, build muscle and bust stress out of your life.

Doesn’t get much better than that.