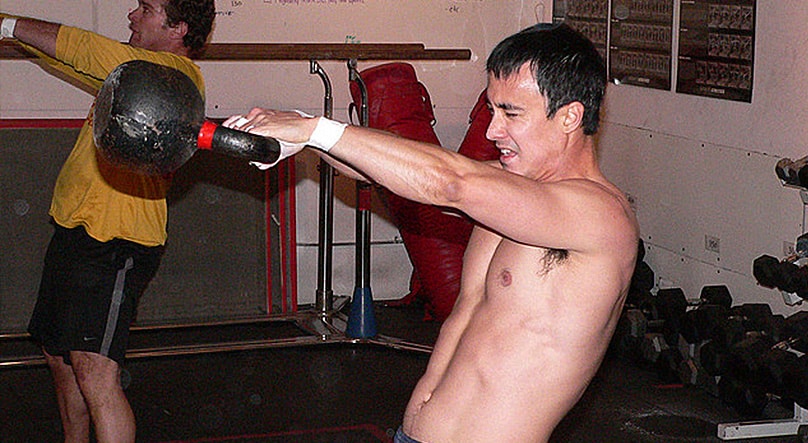 “3,2,1 GO!” The familiar beeps of the clock accompany the booming voice of your coach as you launch yourself into the workout of the day. All around you your classmates are moving in uncoordinated unison, barbells rising and falling, the swish-swish of the jump rope, the distinctive thud of the kettlebell crashing to the ground, and the grunts and curses of the men and women putting themselves through this misery. Ah yes, this is the life.

So you’re working your way through the nasty chipper, trying to move as efficiently as possible while simultaneously keeping up a good pace and staying in touch of your CrossFit rival. So far, so good.

But then things start to go wrong. Your grip starts to weaken on the barbell and you miss a few reps. You start breaking up your rounds more and more. Your breathing becomes heavy and labored. Sweat drips into your eyes, clouding your vision. And all the while, your rival is pulling further and further ahead.

What the hell is going on?

Could it be the fatigue you’re feeling from lifting heavy weights again and again that’s slowing you down? Is it a lack of muscular and cardiovascular endurance? Are some movements hard to execute and it’s simply a case of practicing them during open gym?

There’s something else that’s tripping you up. As you pull your shirt to dab the sweat from your forehead, you realize that the answer has been staring you in the face all along.

Your shirt. Your damn shirt.

Now the wheels start turning in your head. You hesitate to rip it off entirely for fear of being judged by the athletes around you. What will they think of you? Are you too extreme? Are you an obnoxious athlete? But these worries are only fleeting, who cares what they think? Besides, it’s no less obnoxious than meathead Joe over there who’s screaming every rep out as if his life depended on it. Nice double-unders mate.

But they have got one thing right: you are extreme—and that’s a damn good thing. The WOD is beating you, and you need to turn things around sharpish.

Your shirt is obviously weighing you down. All that sweat and chalk it’s soaked up over the course of the WOD has effectively turned it into a weight vest. It’s gotta go.

And so, like a raging warrior you rip (or calmly remove) your puny shirt from your body, feeling the air rush back into your lungs. All of a sudden you’re reinvigorated, as if your shirt was the sacrifice the CrossFit Gods required of you to allow you to return to your WOD glory.

The small act of going shirtless has had a funny effect on your rival (and those around you as well). Their eyes grow wide with astonishment and surprise–or is that fear? It matters not, you leap on their moment of indecisiveness like a lion going in for the kill.

Taking your shirt off is a sign that this is the end for them. There’s nothing they can do. No one works out with half-effort without a shirt on.

You drop the hammer.

Now the barbell flies up and down as if it was made of air. Your muscles and veins are exposed as the sweat flows freely down your body, mixing with the blood and chalk that already adorns you. This is your war paint. Fatigue? What fatigue? You’ve taken yourself to another level, you’ve committed your body and mind to murdering this workout. Only by taking your shirt off can you travel to the darkest depths of your mind to pull the grit and relentless determination you need to reign victorious today.

The clock strikes 00:00, and you look around you. Your fellow athletes lie stricken on the floor, defeated by the unrelenting attack of the WOD. But not you. You stand proud, breathing deeply, relishing in the moment and the knowledge that you have given absolutely everything you have in the workout, and it has not bested you.

You calmly reach down for your shirt that lays crumpled on the floor beside you—a symbol of the athlete you once were that you have since evolved from. Your rival asks you how you did in the workout.

You simply smile and shrug.

The workout never stood a chance.

Photo courtesy of speedoglyn/CC by 2.0