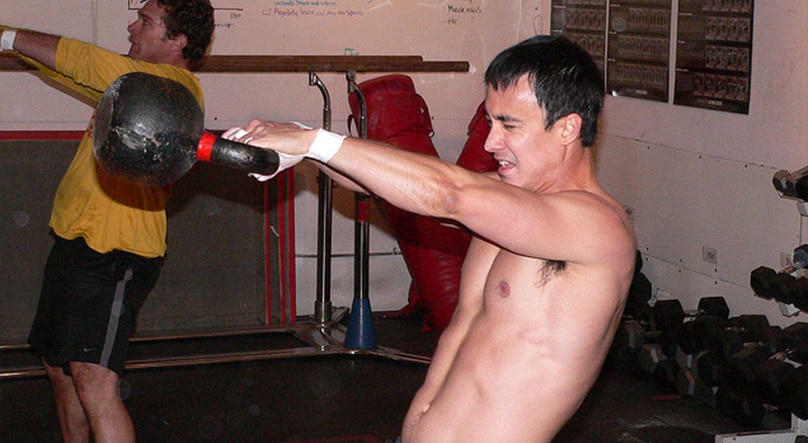 Russian Kettlebell swing: Athlete performs a swing where the bell finishes in line with the torso or eye level.

American Kettlebell swing: Athlete performs a swing where the bell goes overhead, with the athlete’s arms straight and the bottom of the bell pointing straight towards the ceiling.

There has been a long-running debate in the functional fitness community over which method of kettlebell ‘swinging’ is best for the athlete—American or Russian. Putting aside your allegiance to the USA for a moment (and forgetting all the fun and games of the Cold War), understand that there isn’t a straightforward answer to this question. Both sides put forth compelling arguments, which we have distilled for you in this article. As with most things in CrossFit—and life—there doesn’t have to be a solitary way of doing things. Depending on the type of athlete you are (considering your limitations and level of fitness), you’ll likely find that one method of swinging the bell suits you best. Athletes that are looking to do CrossFit competitively will naturally look to train with the American swing, as this is the standard movement in most CrossFit-style competitions. Athletes that are newer to the sport or have prior injuries may look to the RKBS to build a solid strength base. Regardless, it’s up to you to decide which swing best matches your goals.

Arguments for the American Kettlebell Swing (AKBS)
In an article from the CrossFit Journal titled, ‘The Kettlebell Swing’, CrossFit Founder and CEO Greg Glassman presents his argument for why the AKBS should be the primary training method in affiliates. His argument centers on two primary points:

-The first is that the AKBS uses a fuller range of motion. In fact, Glassman argues that performing Russian swings is tantamount to performing partial reps:

So, advocates for the AKBS argue that the natural range of motion for a kettlebell swing would result in the bell finishing overhead.

-The second point is that as a result of this increased range of motion, the AKBS forces the athlete to produce more power to get the bell overhead. From the laws of physics we know this is true. After all, the higher we lift something, and the more it weighs, the more ‘work’ we have to perform. “More work in less time, or more weight moved farther in less time, is largely a measure of an exercise’s potency,” says Glassman. “When we swing the kettlebell to overhead, the American swing, we nearly double the range of motion compared to the Russian swing and thereby double the work done each stroke. For any given time period, the power would be equivalent only if the Russian swing rate was twice the American swing rate.”

However, we must remember that while the AKBS triggers a higher power output than it’s Russian counterpart (and therefore an increased heart rate and exertion level in athletes), it is performed with lighter loads than can be used in a Russian swing.

Arguments for the Russian Kettlebell Swing (RKBS)
In addition to being the original form of swinging the kettlebell (as well as the most widely practiced version of the swing in the world), the primary selling point for of the RKBS is that it is designed to maximize explosive hip and posterior chain strength and power. When performing a RKBS, athletes hinge at the hips, loading the glutes, hamstrings and quads with tension to produce a powerful hip drive. At the top of the swing (which ends at chest level), all of these muscles—as well as your entire core musculature—should contract. You may be thinking that this all sounds similar to the mechanics of an AKBS, which is true—but the main difference in an AKBS is that once the bell gets to chest/eye level, the athlete must engage their arms in order to get the bell overhead. This, the advocates for the RKBS argue, creates a host of problems:

Even some CrossFit coaches argue that the American swing doesn’t increase power (force x distance/time). This is because even though the distance (range of motion) is greater in the American swing, the athlete has to make a compromise in force (by having to use a lighter weight) and time (because the rate at which you move slows considerably once the arms and bell moves beyond a parallel position with the floor). These elements serve to reduce the power output in the AKBS. They argue that a better alternative for power output is to use a heavier weight in the RKBS, which allows for a high force production and faster rate of movement (faster time).

-Swinging the bell overhead compromises the shoulder joint.
The shoulder is the most unstable joint in the body, and moving a weight overhead in a close grip position compromises the mobility and health of the joint. How many times have you swung a heavy kettlebell overhead and then felt your shoulder buckle, causing you to drop the weight altogether? The lack of mobility in the shoulder causes a ripple effect where the back becomes improperly loaded, forcing athletes to hyperextend their lower back in order to get into the finishing position. As such, pro-Russian swing enthusiasts argue that it is far easier to get hurt performing AKBS than RKBS. In the Russian swing, the weight stays below the head, the shoulder joint remains in a far more stable position, there is a shorter range of motion (and therefore less risk of injury), and it’s easier to keep a fixed, neutral posture with a proper hip drive throughout the movement.

Conclusion
So, AKBS or RKBS? We’ve presented the arguments, it’s now up to you to decide which swing best fits your fitness goals. If you’ve done one version exclusively, which is very likely the case if you were introduced to kettlebell swings at a CrossFit affiliate, try the other; you may find the arguments much more compelling then.

Photo courtesy of speedoglyn/CC by 2.0