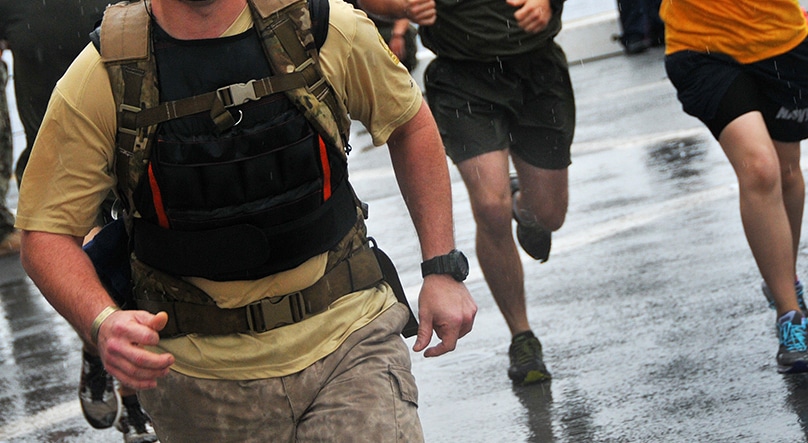 ‘Body Armor’  is the original name for the now famous Memorial Day WOD, ‘MURPH’. The workout is named after Navy Lieutenant Michael Murphy, was killed June 28, 2005 after exposing himself to enemy fire and knowingly leaving his position of cover to get a clear signal in order to communicate with his headquarters. He provided his unit’s location and requested immediate support for his element and then returned to his position to continue fighting until he died from his wounds. In truth, I could write an entire article on the heroism of Lt. Murphy and how his courage (and the courage of all service personnel) continues to inspire the CrossFit community—but that’s for another time. The reason I bring up ‘Body Armor’ is because it was designed by Lt. Murphy, and he preferred to perform the one-mile run, 100 pull-ups, 200 push-ups and 300 squats (oh, and another mile run) while wearing a 25-pound flak jacket. When CrossFit affiliates perform MURPH on Memorial Day, they have the option to wear a weight vest as well—though 20lbs is usually the recommended weight.

You may have glanced at the black vest hanging off the equipment rack and thought to yourself, “Damn, that looks pretty cool. But I know working out with that thing on is going to be intense. Am I ready for it? What will I get from wearing it?”

Are you ready for a weight vest?
Just in case you weren’t aware, weight vests are exactly as they sound: heavy vests. These vests are worn over the torso and provide varying amounts of resistance, thanks to the fact that a lot of them are designed to add or remove weighted bars as needed. With their high versatility, weight vests allow for a broad range of exercises, such as jogging, rope climbing, pull-ups, push-ups, sit-ups, burpees (shudder) and many more.

So, if you’re interested in strapping one of these bad boys on to do a WOD, there are a few things you need to consider first.

1. Your fitness level.
Before you decide to go all Rambo, you need to ask yourself a serious question about your current level of fitness as it pertains to the WODS you do in CrossFit. Do you struggle with most of the movements and often scale? Do you have to rest the following day? Do you struggle to finish within the time cap?Do you only workout once or twice a week? If this is the case, you should look to build up your general level of fitness before adding any extra resistance. As you do so, you can test out wearing a light vest for some metcons that feature a lot of running or other cardio work and go from there.

2. The design of the specific WOD.
The intensity, duration and movements of each workout vary, and do play a role in whether you should wear a weight vest or not. For example, if you are doing a heavy EMOM (every minute on the minute) of cleans, I really don’t think you need to make your job any harder by adding extra resistance. Besides, you want to focus on your technique, body position and bar path and wearing a vest is only going to throw you off. On the other hand, if you want to honor the memory of a loved one or a fallen member of the armed forces or a first responder, I feel that wearing one would be a fine way to do it. Most of us can only imagine the burden these men and women have to bear as part of their jobs—wearing a weight vest should remind us of that fact pretty quickly, if only in some small way. In addition, you may find that you are flying through some WODS that are in your wheelhouse with great ease, getting faster and faster as you get fitter and fitter. Perhaps it’s time to step it up a notch and see what you can do with your body when you’ve strapped 20 extra lbs. to yourself. Just make sure you check with your coach first before you bring the pain.

3. How much weight you’re going to put in the vest.
This is important. In the case of wanting to vary your metcons, 5lbs may be enough to give you that extra element of difficulty you’ve been looking for. But you have to bear in mind that even 5lbs can make a huge change to the make-up for the workout, and your body may not be used to it—especially if it’s your first time wearing a vest. If you decide to wear one for MURPH, your footfalls are going to be that much heavier during your run, which may cause added strain to your knees and joints.

What are the advantages to wearing a weight vest?

Advantage 1: Increases strength and endurance
Benefits from wearing weight vests are seen in both strength training and aerobic activities. Carrying extra weight during exercise requires added strength and oxygen, all the while sapping your energy stores. With any exercise the more weight used, the more the muscles have to adapt to the higher weight—which builds strength and muscular endurance.  A Texas Tech University study tracked a group of collegiate football players performing traditional resistance training combined with plyometrics and a second group performing resistance training and plyometrics in addition to weight vest training. After six weeks, both groups were found to have improved in the 40-yard dash, broad jump, and vertical jump, though the group supplementing their resistance training with weight vests produced substantially better results.

Advantage 2: Serves as a tool for variation
Constantly varied functional movements performed at high intensity. I’m sure you’ve heard that more than once, seeing as it is the definition of CrossFit. Human bodies adapt to specific movements over a period of time, whether positive or negative. A halted progress in exercise is usually the result of this adaptation. Weight vests provide a great tool for variation that our bodies aren’t prepared for. This unconventional exercise method allows us to throw our systems off whenever necessary.

Advantage 3: Huge cardiovascular benefits
Similar to the effects one can have in muscular strength and endurance, running or rowing with a weight vest poses a serious challenge, as you might imagine. The cardiovascular system has to go into overdrive as a result of the added resistance, strengthening the lungs and an athlete’s VO2 Max (a measure of the body’s ability to consume oxygen) and their lactate threshold (the exercise intensity at which lactate begins to accumulate in the blood). This is exactly what happened in a study published in the European Journal of Applied Physiology and Occupational Physiology. A group of endurance athletes were separated into experimental (wearing the vest) and control groups to investigate the effects of extra-load training on energy metabolism during exercise. The study found that “those experimental subjects who used the added load during every training session had a lower 2 mmol lactate threshold, improved running time to exhaustion, improved vertical velocity when running up stairs and an increased VO2 during submaximal running after the added load period.”

Advantage 4: Musculoskeletal Benefits
As well as making your muscles stronger, wearing a weighted vest when running will increase the load transmitted through your bones. The extra loading can result in increased bone mass by stimulating cells called osteoblasts to lay down new bone material in response to the demands being placed on your skeleton. To simplify, bones become stronger and denser to handle the extra weight.

Considerations to using a weight vest
A weight vest is not a cheap item, and unless your box has enough to go around, be prepared to fork over $100 for one—not to mention the cost of extra weight plates if you feel desired to invest in them. You also have to watch out for the amount of weight you use as too great a load can have an adverse effect on your running style. If the vest is too heavy, you may find that you run using a lower, shorter stride pattern, which subsequently alters technique when you return to running without a vest—it may mean that you may not be able to run faster or farther. On top of that, wearing a vest that is too heavy increases the impact and forces that are transmitted through your legs, which can lead to injury. Make sure you start with a light load (5% of your body weight or lower) to minimize the risk of injury and work your way up from there.