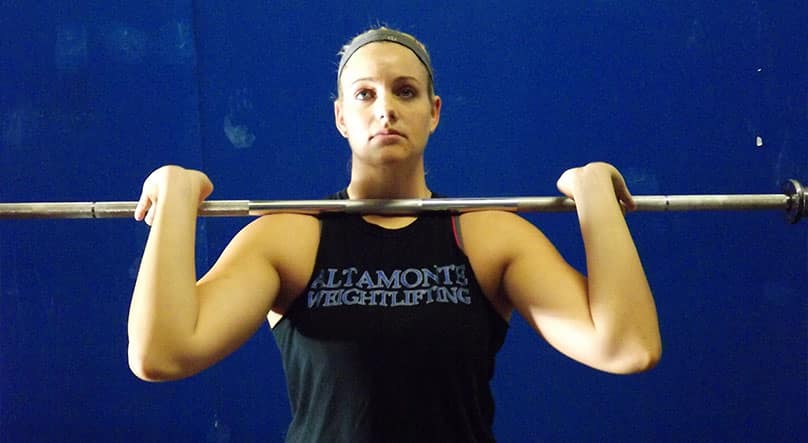 I’d wager that when it comes to the split and push jerk, most CrossFitters employ a close-grip (shoulder width) position. That’s what they were taught in foundations, so that’s what they continue to use in workouts. But just as you should experiment with different squat widths to determine your ideal squat stance, there’s no governing rule over where you should place your hands on the barbell before jerking it overhead.

The benefits of a close-grip jerk are as follows:

-When you receive the bar overhead in a close-grip position, your skeletal bones are stacked in alignment. This is important since your skeletal support is responsible for holding a jerk overhead, not the arms.

-A close-grip position doesn’t require you to change your clean grip when performing the clean and jerk. We perform our cleans with a close grip because a wide grip negatively impacts your pulling power and requires a higher degree of flexibility to execute. So, when coming out of the clean and setting up for the jerk, athletes don’t need to expand additional energy in repositioning their grip on the barbell (which is done by popping the bar off the chest using the legs and repositioning the hands while the bar is in midair). What’s worrying is that if the athlete doesn’t find the right grip the first time, they have to pop the bar up again, using more energy and increasing the likelihood of a mental psych-out before they attempt the jerk.

The case for the wide-grip position

Luis Mosquera of Columbia demonstrates the wide-grip split jerk (starting at :44) in competition.

-It’s better suited for athletes with longer arms, as it’s difficult to hold a barbell in the front rack position with longer levers (i.e. arms) and requires a high level of flexibility. Not only that, but longer arms means that the range of motion required for getting the barbell to the finishing position in the lift significantly increases. By moving the hands to a wider position, the athlete shortens the range of motion, thus allowing them to concentrate on generating upwards momentum with the hips and legs rather than the arms (as is the case in the close-grip position), which are far more effective at power production.

Schmitz also notes that many lifters struggle to lock out their elbows in a close-grip position, but the reduced range of motion afforded by a wide grip allows for an easier elbow lockout. However, former competitive lifter and current Olympic Weightlifting referee Dresden Archibald argues that the wider angle of the arms in a wide-grip jerk is akin to attempting to hold a snatch overhead with a far heavier weight than one would normally snatch with. As a result, an athlete needs to possess immense shoulder strength as well as stability, since any backward or forward motion of the bar overhead will likely result in a missed jerk.

Lastly, there is the issue of how a wide-grip position can negatively impact an athlete’s ability to use the bar’s elasticity (the ‘whip’ of the bar) to their advantage. The point where the hands grip the bar acts as a fulcrum for a bending bar (which happens when you have heavy weight on either end and when you perform the dip before the drive in the jerk). Athletes can use the bar’s natural bend to generate additional power that helps get the bar overhead (as Games champion Ben Smith demonstrates here). However, when the hands move wider on the bar, the fulcrum also moves wider and its lever (the bar) gets shorter and loses much of its elasticity.

So which grip is best?
As the above points show, there isn’t a straightforward answer to this question. What works for one athlete might not work for another, which is why we see such varying styles even among the most elite Olympic Lifters. One has to consider anatomy, flexibility, strength and general comfort when it comes to utilizing a particular hand position for the jerks.

20+ year Weightlifting veteran Daniel Camargo and head coach at CamargoOly.com states: “It’s perfectly fine to have a wider grip in the Jerk than what you used for the Clean, but it’s not necessary. Please don’t feel like you need modify your grip, just know that it is

common and preferred by many lifters. It’s okay to have a wider grip because the Jerk is different than the Clean. A wider grip allows for greater comfort in the shoulders, a shorter distance to travel overhead and more stability in the overhead position.  You’re already top-heavy when in the overhead position, so having a wider grip will put the barbell a little closer to your head giving you a greater sense of control.  Not sure how wide your grip should be? Do whatever feels comfortable. That’s it! No angle measurement, no degrees to calculate, no inches to determine and no geometry to figure out, just comfort. You’ll know what feels right. Don’t overthink it.

In the end, it’s on you to experiment with it to see if you feel more comfortable with it and have greater success with it as a result.