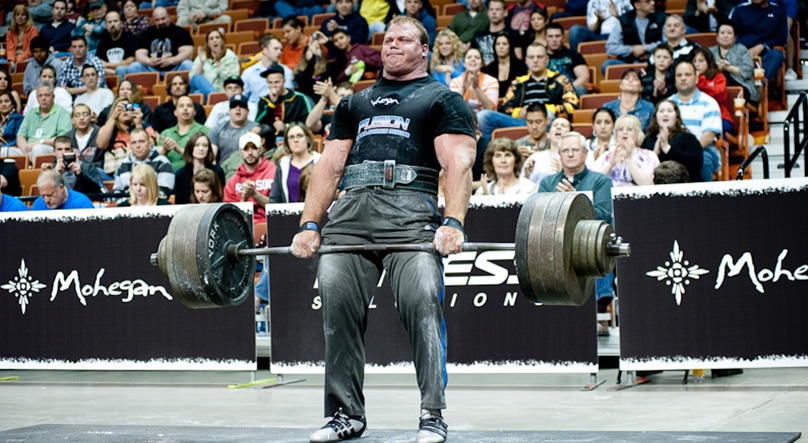 The weightlifting belt has been a stable of the Powerlifting and Strongman circuits for years, and it is incredibly popularity within CrossFit as well. However, there is some conflicting research and opinion on whether an athlete should use this piece of equipment, when they should use it, or if they should avoid it altogether.

There are a number of studies that show how belts affect the amount of intra-abdominal pressure the wearer may experience during exercise. One such study, published in Clinical Biomechanics in 1999, “evaluated the effects of abdominal belts on lifting performance, muscle activation, intra-abdominal pressure and intra-muscular pressure of the erector spinae muscles”. Now, these factors were measured simultaneously during the Valsalva maneuver—performed by holding your breath while straining or exerting force, as you would do in a squat—as well as during isometric “lifting exertions” (isometric exercises are a type of strength training in which the joint angle and muscle length do not change during contraction). As such, one needs to be wary when looking at the results as they may not relate to eccentric/concentric movements—such as the back squat and deadlift. Even so, the researchers reported that “intra-muscular pressure of the erector spinae muscles increased significantly by wearing the abdominal belt during Valsalva maneuvers and during maximum isometric lifting exertions”.

Of course, you can always create your own intra-abdominal pressure by performing the Valsalva maneuver on your own (breathe in, hold your breath and tense your abs). The weight belt just gives your stomach something to push against, increasing the pressure, thereby stabilizing your core and reliving the stress on your spine.

This is the good news with belts. Now for the bad.

Effects motor learning
Nick Horton of Breaking Muscle argues that belts affect an athlete’s experience of ‘learning’ how to squeeze and contract their abs—particularly in the case of novice lifters. Instead, the belt acts as a crutch—given that it increases pressure in the abdominal area.

Of course, this issue is easy to circumvent. If you spend the time to work on the accessory drills that will strengthen your core, increase your stabilization and ensure that you are lifting correctly, then your midsection should be strong enough to execute most of the tasks you demand of it.

Masks/aggravates potential injuries
Say you’re a lifter that’s experiencing some serious back pain during your deadlifts. You’re hyper-extending your back in order to crank out more reps and heavier weight, but instead of checking your ego and dropping the weight, you decide to invest in a weightlifting belt. So the belt takes away some of the pain, but your form is still atrocious and you are still hyper-extending your back. Eventually (and inevitably), the pain returns, but this time it’s much worse and you have to go and see a PT or a doctor, who diagnoses you with a hernia. Simply put, weightlifting belts are no substitute for proper form and appropriate weight. Just because you’re wearing one that allows you to move 10lbs more than your PR doesn’t mean you should completely forgo the mechanics of the movement. That’s how injuries (and bad reputations) come about.

Weakens lower back
Much as a belt acts as a crutch to the detriment of the development of the core, it can also have the same effect on your lower back—particularly if you wear a belt for high rep/low weight workouts. Belts will take stress off of the lower back, which is a bad thing because stress (i.e. the weight) is what drives adaptation and development in the body.

When should you use a belt?
The cons that I have listed above reveal the instances where you should NOT use a belt—to mask an injury, during high repetition workouts, or during lifts where the load is to light (under 80% of your 1 rep max), thereby negatively affecting the development of your core musculature and increasing the risk of injury. Dr. Stuart McGill, a professor of spine biomechanics at the University of Waterloo, has a pretty strong opinion on the use of weightlifting belts:

“Much of the occupational evidence has relevance for athletic use of belts. There is no question that belts assist in generating a few more Newton-meters (or foot-pounds) of torque in the torso through elastic recoil of a bent torso that is stiffened with a belt. However, if a neutral spine is preserved throughout the lift this effect is minimal. In other words, to obtain the maximal effect from a belt, the lifter must lift poorly and in a way that exposed the back to a much higher risk of injury!”

While I do agree that proper execution of movement mechanics and focus on accessory work can be more beneficial to your development as a lifter than a belt can ever be, it doesn’t mean that a belt can’t come in handy—especially when you are attempting to hit those monster weights for a PR. You should think of a belt as a tool. It can enhance your performance in certain instances (i.e. when you need extra support during heavy lifts), but don’t rely on it to the extent that it starts to take away from developing into a strong athlete who is confident as a ‘raw lifter’—no knee straps, no OLY shoes, and no weight belt. Watch Ben Smith’s 300lb raw snatch as a reminder: