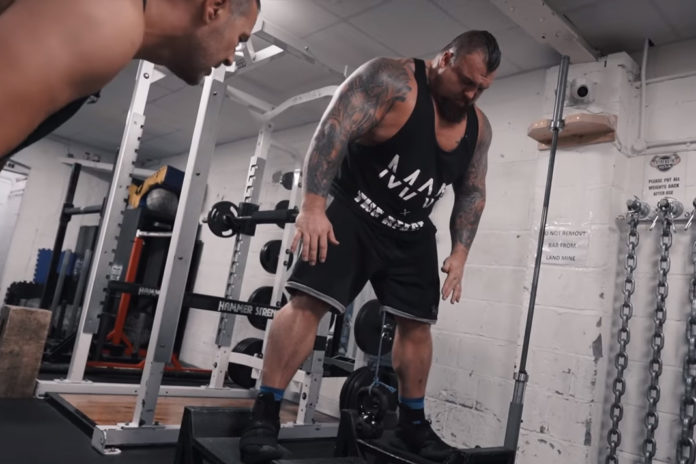 We may have just discovered event one of the 2020 CrossFit Games. An event so savage, it would no doubt cut the field in half. What difficult feat, you ask? Lifting a kettlebell by the balls. Yup, you read that correctly.

All jokes aside, we can rest assured that this won’t make it into the final draft of Castro’s programming. However, Strongman Eddie Hall actually made this a thing in a recent training session. The 31-year-old 2017 World’s Strongman Champ might be going a little stir crazy in the gym after stooping to what many men would consider an all-time-low in his latest YouTube release.

While training with friend, Paddy McGuinness, Hall threw down quite the challenge saying, “I’ve completed the World’s Strongest Man, what’s the next one up from that? It’s lifting weight with your balls.”

If you’re a male, you probably just cringed and felt a little nausea flow through the body.

McGuinness didn’t back down from the incredibly strange competitive standoff, emphasizing the fact that he’s had a vasectomy and can’t make his low-hanging package any worse, “because I’m 46 years of age, my testicles are already round my knees. I’ve already got a slight advantage on you, I don’t have to lift them up as much.”

If you still think this is going to end in a good ole’ laugh and unscathed genitalia, guess again. The video shows the duo taking a trip to the bathroom where they would tie thin rope around the entire male region (to keep things as PG as possible). From there, they would tie the rope around a kettlebell and start in a lower squat position. The final push would be standing straight up, deciding who could hold more weight from their balls.

Hall proved that his tenacity translates further south than we would think, successfully standing up with a 6-kilogram kettlebell from his precious cargo. Beating McGuinness by 2-kilograms.

Have no fear, we don’t think Hall’s new competition idea will get very far, and certainly won’t have a place within the box. Regardless, if this feat has sparked your interest and stirred up your competitive nature, we strongly urge against trying it at home.

Watched the video below to see the ‘action’.