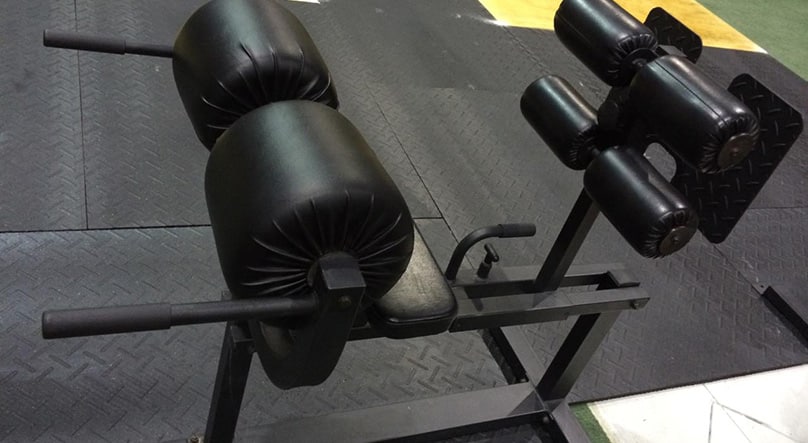 The glutes-hamstring developer—also known as the GHD—can usually be found in the corner of the gym, inconspicuously tucked away. Though it may resemble some sort of medieval torture device, the GHD is one of the most underappreciated, undervalued and misunderstood pieces of equipment found in a CrossFit box. The movements you perform on a GHD may appear to be straightforward, but if done incorrectly they could lead to injury. Conversely, if you take the time to learn how to use the GHD in a safe and efficient manner, you’ll be able to take advantage of the numerous benefits it provides.

Oddly enough, the two most common movements we usually see performed on the GHD—sit-ups and back extensions—are not the ones that the GHD was designed for. While performing sit-ups and back extensions on a GHD is a great way to develop core, back and hip-flexor strength, the name of the machine reveals its true purpose—to develop an athletes glutes and hamstrings—and to do this, one must perform GHD raises. Well that makes sense doesn’t it? But have you actually performed a GHD raise yet? For some reason, GHD raises are rarely seen in the majority of affiliate programming, but it is an incredibly effective movement that shouldn’t be ignored. Let’s examine how to perform the GHD raise correctly, and what benefits can be derived from it.

Performing the GHD Raise:
The set-up:
The GHD is comprised of three main components: the kneepad, the footplate and the ankle hooks. The kneepad is fixed while the footplate can be adjusted both horizontally and vertically. The correct setting of the footplate will vary from individual to individual based on a myriad of factors such as tibia length, femur length, size of the thighs, and current strength level. As a general rule of thumb, you should adjust the footplate so that when your feet are secured in place your mid-to-upper thighs will be supported on the curved seat. Your knees should clear the back edge of the seat by at least 3 to 6 inches and your upper body, including the pelvis, should hang down over the seat.

The basics:
• Set up with the knees either directly on or slightly behind the pad, with the feet firmly on the platform and the back of the calves pressed lightly against the upper ankle hook.

• Begin with the torso perpendicular to the floor.

• Next, squeeze the hamstrings, glutes, and abs, and lower under control until the torso is parallel to the floor.

• From there, return to the starting position by pushing the toes into the footplate (which activates the gastrocnemius) and pulling up with the hamstrings. Be sure to keep the glutes contracted.

When performing the GHD raise, the goal is to maintain a straight line through the knee, hip, shoulder, and neck at all times. In order to achieve this, think about making the body as long as possible. Two of the most common flaws that arise from performing this movement are breaking at the hips and hyperextending through the lumbar spine. These errors result from not being strong enough in the hamstrings and glutes to maintain proper body alignment, and if you feel a lot of strain in your lower back when doing the GHD raise, this is likely the case for you. As always, the smart thing to do is scale back and work on developing your strength in those areas and build up to a GHD raise.

Benefits:
The glute-ham raise is a movement that can really help develop your Olympic lifts, as well as your squats and deadlift. The reason being that the majority of power for these lifts comes from the posterior chain (which is comprised of the calves, hamstrings and glutes, as well as other muscle groups). In fact, Canadian strength coach Charles Poliguin—a man that has designed workout programs for over 400 Olympians—says that approximately 40% of the power for sprinting and jumping comes from the glutes, 25% from the hamstrings and 5% from the calves. Thankfully, GHD raises effectively target all of these areas. When you return to the starting position in the movement, you drive your toes into the toe plate to engage your calves and generate force to help your body move upwards. The hamstrings are strengthened at both the knee and hip joint as it works its two primary functions, knee flexion and hip extension, simultaneously. This is exactly what’s happening when you perform everyday movements like running, squatting and jumping, which is why GHD raises are regularly employed by powerlifters, Olympic weightlifters and sprinters.

In addition to the weightlifting benefits that GHD raises can provide, they are also effective in preventing injuries, particularly hamstring strains, back injuries and ACL tears. Because GHD raises increase muscle mass and strength in the back, glutes and hamstrings, athletes are better able to withstand the compressive loads and disruptive forces that can occur in numerous sports and physical activities. Furthermore, this exercise puts relatively little stress on the lower back as there are minimal shearing forces involved. As such, GHD raises can be a valuable accessory exercise to deload the spine while still achieving a good training effect.