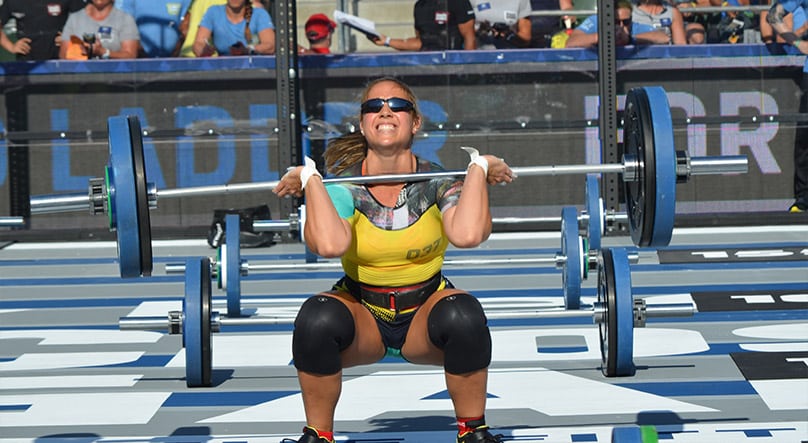 Generally speaking, you should be able to clean and jerk more than you can snatch. This is because the snatch is a far more complex lift than the CJ, and you can front squat more than you overhead squat (or at least you should be able to. If it’s the other way around, you have a serious muscular imbalance that needs addressing pronto). But exactly how much more weight should you be able to move in the CJ versus the snatch? To find out, we enlisted the help of Bob Takano—a internationally renowned Weightlifting coach who, in addition to having coached four national champions, two national record holders and 27 top ten nationally ranked lifters, is inducted in the USA Weightlifting Hall of Fame. So needless to say, he knows his stuff.

“An athlete who is technically proficient in both movements [the clean and jerk and the snatch], trains at the appropriate bodyweight for height and is training properly will demonstrate a consistent relationship between the two lifts at a peaked, meaningful competition. For most lifters this will result in a snatch to clean & jerk ratio of 78% to 82%.

If the snatch is less than 78%, the following remediations should be considered:
– The athlete is lifting at a bodyweight class that is heavier than optimal for his or her height.
– The average training weight is too high.
– The snatch is lacking in technical proficiency.

If the snatch is more than 82% of the clean & jerk, the following remediations should be considered.
– The lifter is too light for his or her height.
– The average training weight is too low.
– The squat is less than 131% of the clean & jerk.
– The clean or jerk is lacking in technical proficiency.

“In some circumstances the problem may simply lie with the character or exercise selection of the training program.  The issue of average training weight is a complex one, however.  Many athletes without coaches mistakenly believe that they can make balanced improvement by merely lifting heavier poundages in training and completely neglect the development of power.  This can lead to excessive percentages of the training repetitions being performed in the wrong intensity zones,” say Takano.

As Takano states, if you find that the ratios between your two lifts is way off, don’t immediately assume that the remedy is to train with heavier weight. There could be a number of other factors in play.

For example, you may need to lose some weight, or gain some, depending on the percentage of your snatch to CJ. For example, often times athletes need to add lean muscle mass in order to increase their clean and jerk. Takano writes at length on this very topic:

“Every athlete at a given time has an optimal bodyweight to height ratio to make progress in both the snatch and clean & jerk.  Increasing the bodyweight beyond that point will allow the athlete to have a higher average intensity in training lifts.  This will at some point cease to produces increases in speed, but will continue to produce increases in strength.  This is more favorable toward progress in the clean & jerk, but not the snatch.  This [continuing to increase bodyweight] will begin to inhibit increases in speed of the bar and speed of the body.”

I’m sure you’ll find athletes at your box who are lighter than you, yet have numbers in the Olympic lifts that match or even surpass yours. What gives? I’ll tell you what gives: a lack of technical skill and/or a lack of mobility. The two are often connected, but both can be corrected with additional practice and emphasis on improving this weakness.

Finally, if you think that you snatch and CJ numbers are too close for comfort, they probably are. But instead of saying to yourself, ‘hmm, that’s interesting. Oh well on with the workout!”, talk to your coach and make him or her aware of the issue. Then work your way down the list that Takano provides to figure out if it’s an issue of bodyweight, an imbalance in average training weight, or poor mobility and technique.