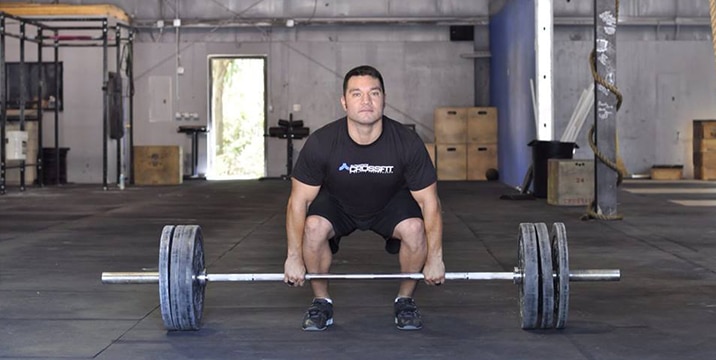 The snatch and the clean and jerk are the holy grails of weightlifting. These two lifts are notoriously difficult to perfect, perhaps explaining why they are the only two movements that make up the Weightlifting event at the Olympics. In fact, some would argue that they are impossible to perfect—there is always something that you can do to become a better lifter. With that being said, once you do achieve some level of proficiency in these movements, the next challenge you face is how to consistently become better at them. This is where programming becomes important and a plan must be outlined to help the athlete excel.

Every good weightlifting program must be systematic in its approach. The idea is to gradually increase the load on a weekly basis until maximal effort can be achieved. Simply entering the gym each day and going heavy without a planned program is a poor method of training and any results that you do gain from that will be temporary. I train my athletes for longevity. This article aims to cover the principles I recommend to ensure athletes stay in the game long enough to reach their potential. To do that, we’ll focus on the program best suited for beginners and intermediates.

Terminology
Before we delve into programming let’s define some terms to avoid confusion:
Volume= repetitions and sets
Intensity= load on the bar (amount of weight)
Programmer= the person planning and analyzing workouts
Athlete= the person performing the planned programming
Coach= the non-athlete who is dedicated to the athlete, who administers the program, and who makes decisions or modifications as necessary to achieve the goal in mind
Power= any dynamic motion that includes the element of speed and/or explosion
Strength= any static motion that includes effective, steady, force on the barbell

Considerations before programming
Now that some terms have been defined, let’s talk about considerations the programmer must make prior to writing a routine. The first is the athlete’s athletic background. We can never predict the experience of those walking into our gyms for the first time. Once an athlete has been taught the technique and it’s time to program for them, attention should be given to what sports they may have played, how fit they may already be, how long it’s been since they have been physically active, and whether they have any weight training experience at all. Certainly, someone who is “out of shape” may need to spend more time working with higher volume (more reps) and low intensity (light weight) than someone who is fit and has a great deal of weightlifting experience.

Next, the programmer should consider the athlete’s flexibility and range of motion. We all know someone who has difficulty with mobility and struggles with movements such as overhead squats, pressing behind the neck or even picking up a barbell from the floor with a flat or concave back. The more inflexible the athlete, the more mobility exercises should be programmed. It is highly recommended that the athlete stretch only as far as necessary to accomplish the movements of the workout ahead of them, and save increased mobility work for after the routine is complete. The best time to work on deep flexibility is at the end of the workout, as this can be strenuous enough on its own. A programmer wouldn’t want to put additional stress on their athlete before the routine has even started.

PRINCIPLES OF PROGRAMMING: A programmer’s checklist
Build templates for large groups, individualize for the athlete. This one seems to cause new coaches stress. How do you write workouts for large groups? Easy, write a program that you want everyone to do and use it as a template. From there, programmers can adjust and modify for individuals as needed, or not at all. This saves time and effort for the programmer, allowing more time to be spent on coaching (should the programmer also be the coach).

Beginners need more variety. Because a new athlete is still refining technique, they need to have more exercises per workout. That is not to say they have to stay in the gym longer than everyone else. In fact, a great beginner program can still be accomplished in 60-75 minutes. The more exercises, the more they are exposed to different movements, therefore improving their understanding of weightlifting and their own bodies.

Dedicate each day to either the snatch or clean and jerk, with one day dedicated to both. It is recommend that the programmer have snatch-themed days and clean and jerk-themed days. Alternating between the two helps the athlete to focus on each lift, as well as their variations. That said, to avoid monotony and adaptation, it is recommended that one workout per week should have both the snatch and the clean and jerk programmed together. This way, the athlete has ample opportunities to work on the lifts equally.

The most complicated exercise comes first in a workout. Each day the athlete enters the gym, the first exercise programmed (other than mobility to warm up) should be the one that is most technical. For example, the snatch (highly technical) should come before a back squat (less technical), and the clean and jerk should always come before deadlifts for the same reason. The logic behind this goes back to the understanding that Olympic weightlifting has the greatest effect on the nervous system. Though all the systems in our bodies—muscular, skeletal and endocrine—are getting worked, it is our nervous system that is taxed the quickest. So, if an athlete can start their training session with the exercises needing the most coordination, there’s a greater chance of success than if they performed the movements at the end of the routine when fatigue has set in.
Include movements from each of the three assistance exercise categories: pulling, overhead and squatting. The most technical movement of the day should be followed by movements in order of most complex to least complex: pulling exercises such as high pulls, deadlifts, and lift offs; overhead exercises such as the press, jerks and overhead squats; squatting exercises such as the back squat, front squat and pistols. The inclusion of these assistance exercises further exposes the athlete to a variety of movements and improves their strength and power.

Include plyometric/dynamic exercises at the end of the routine. After all barbell movements have been completed, rapid bodyweight movements such as box jumps and agility routines are recommended. This could be considered part of the cool down. These movements are meant to help athletes with explosiveness and ‘being light on their feet’, which improves their ability to move around the barbell.

Include core-building exercises. The final element of a routine should be something slow and static that targets the athlete’s trunk or torso. By that I mean more than just abdominal muscles. The movements should engage the lower back (lumbar), upper back (thoracic), obliques, lats and so on. These sorts of exercises help with an athlete’s stability and overall balance during the snatch and clean and jerk.

Rest days should be spread out. I don’t necessarily follow a principle of two or three work days followed by a rest day. Since there are seven days per week and my athletes have responsibilities outside of the gym (work, school, families), I tend to simply map out the total amount of days they can train and insert two rest days, spread out evenly if possible. For example, many of my weightlifters have Wednesday and Sundays off in order to avoid having consecutive rest days.

Heavy days should follow a light or complete rest day. In order to optimize an athlete’s maximal effort days it’s best to ensure the previous day’s workload is either light in volume and intensity or a rest day. Never let a single workout negatively affect an athlete’s performance the following day. An athlete is no good to the programmer, coach, or themselves if they’re entering a big training session fatigued or sore from yesterday’s workload.

Sample Week
This sample week is not to be repeated every week. Programmers must alternate volume and intensity as weeks progress. This is only an example to help visualize what has been expressed in this article. The first number of the fraction is the percentage (%) of the athlete’s 1RM of a given exercise. The second number represents the repetitions. Each fraction is an individual set. For example, on Monday the athlete is working the Power Position Snatch for two sets; one set of 3 reps at 40% of their 1RM and one set of 3 reps at 45% of their 1RM.

The sample week is a five day training regimen. If there are only three days available for the athlete to train, I recommend simply taking a snatch day, a clean and jerk day, and making the third day of training the same as Saturday’s training in which you combine both lifts.

From the October/November issue of BoxLife Magazine