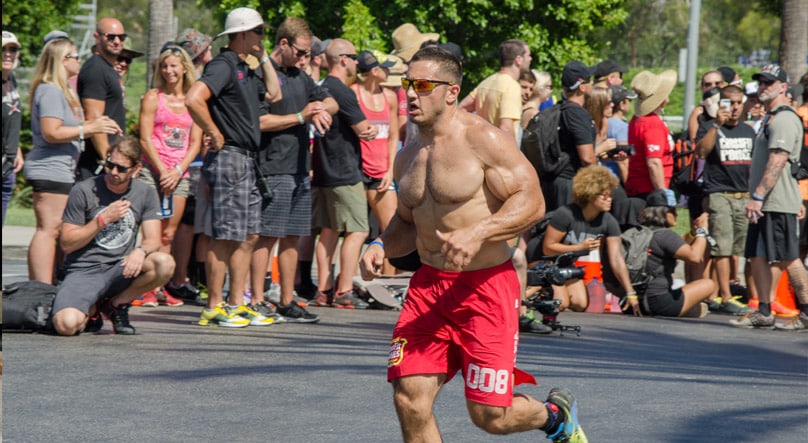 In almost every competitive sport in which an athlete is required to move an external load—be it metal or flesh—weight classes play a role. Boxing, MMA, powerlifting, strongman, judo and Olympic Weightlifting all utilize weight classes. Even triathlons, which typically separate competitors by age, have two weight divisions for men over 200lbs (Clydesdale division) and women over 150lbs (Athena division). You wouldn’t expect a 150lb Olympic Weightlifter to out-lift a 200lb. competitor, nor would you expect a flyweight boxer to compete with a heavyweight. The governing bodies of those sports don’t think that huge disparities in weight create a level playing field—and they’re right.

But the idea of weight divisions at the CrossFit Games will probably never be entertained. Why? Because it goes against the ethos of the CrossFit Games—to find the fittest man and woman on earth. And to become the fittest, you have to be well rounded in every area of your game—regardless of how heavy, light, tall or short you are. The programming of the Games favors the “all rounder” and punishes the “specialist”. So while bigger athletes might excel in the heavy barbell events, they could also be exposed in endurance events that favor smaller athletes, and vice versa. That’s why Games athletes seek to be as balanced as they can be. It’s entirely possible that someone could win the Games without placing 1st in a single event by consistently finishing in the top 10-15 in every event.

But even though the purpose of the Games—and CrossFit in general—is to have balanced tests of fitness, some Games competitors don’t think the tests are equal for all competitors. Games legend Chris Spealler, at 5’5” and 145lbs, routinely battled against men far taller and heavier during his seven appearances at the CrossFit Games. “Speal” has often spoken of how bigger guys with existing strength bases that come into CrossFit have a natural advantage, as they are quickly able to build up their cardiovascular endurance. Take Mat Fraser, who came into the sport after spending two years training as an Olympic Weightlifter at the Olympic Training Center in Colorado Springs. Fraser qualified for his first Regionals after just 8 months of full CrossFit experience in 2013, and finished 2nd at the Games last year. Spealler has said that for smaller athletes, building a Games-level strength base can take a lifetime. In fact, he believes that the days of the smaller athlete qualifying for the Games might be numbered.

And that brings up an interest point. In most professional sports, there is a definite body ‘type’ that, over the years, has evolved to become the norm. In basketball, for example, there has been a sporting ‘natural selection’ that has culminated in the average NBA player being 6’7”—which makes sense when you consider the object of the game is to put a ball in a hoop that’s 10 feet tall. Height and length is valued in basketball, just as it is in gymnastics—albeit at the other end of the spectrum. But is there a certain body type that is favored for success in CrossFit? According to the statistics, it appears that there is.

The earliest statistical data we have for a full list of CrossFit Games competitors comes from 2009, the final year the Games were held on the Ranch in Aromas, CA, where the competition began in 2007.

160lbs and below
9 athletes

Average weight of a male athlete at 2009 CrossFit Games: 184lbs

Average weight of a female athlete at the 2009 CrossFit Games: 137lbs

The following year, the 2010 CrossFit Games were held at the Home Depot Center (now Stub Hub Center) for the first time.

160lbs and below
2 athletes

Average weight of male athlete at the 2010 CrossFit Games: 188lbs

Average weight of a female athlete at the 2010 CrossFit Games: 138lbs

Now, let’s look at the same statistics from the competitors at the 2014 Games.

160lbs and below
2 athletes

130lbs and below
7 athletes

Average weight of female athlete at the 2014 CrossFit Games: 141lbs

As you can see, the weight of the average competitor at the CrossFit Games has steadily increased over the years. However, the total number of lighter (160/130lbs) competitors has significantly dropped since 2009—especially on the women’s side. The introduction of the Open, age groups and a smaller athlete field at the Games have all played a part in fine-tuning the typical Games athlete.

Ahead of the 2015 Regionals, CrossFit has released the statistics of the average Regional athlete. The 660 competitors are the top 1% (actually, it’s the top .303% for women, .215% for men) of the 262,036 athletes that participated in the Open, so it gives us a pretty good indication as to what the ‘ideal’ body type for this sport is starting to look like:

If you look at only the top 10 finishers in the Open, the average weight of the men increases to 197lbs; the women’s weight remains at 142lbs.

The 2015 CrossFit Games will mark the 9th anniversary of the competition. Will we see any more changes to the average CrossFitter over the next five-to-ten years, or are the athletes we’ll watch this year the final result of the sport’s natural selection?