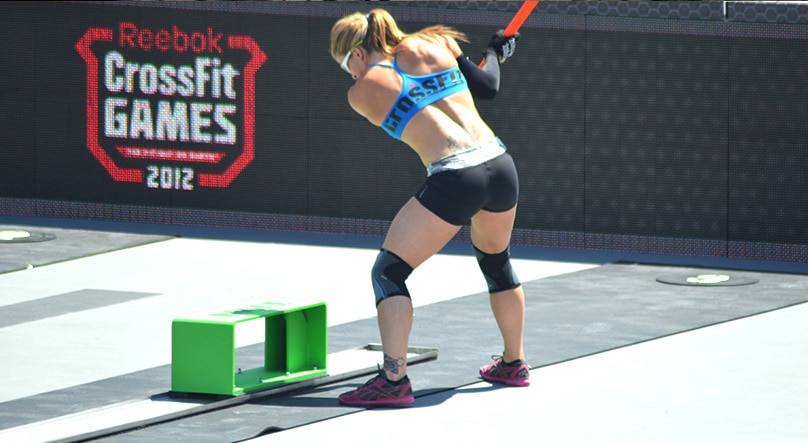 In 2007, the first ever CrossFit Games were held on a dusty ranch in Aromas, CA. Competitors wore basketball shorts and Adidas sneakers. There was no stadium, no ESPN coverage, and not a single muscle-up. The weights were lighter, the times were slower, and there were only three events. Now, we can look back at the early days of CrossFit and marvel at how far the standards have evolved when it comes to finding “The Fittest on Earth”. But who’s to say that 10 years from now, we won’t be looking at today’s standards and doing the same thing? And that poses an interesting question: What will the Games look like in 2025? To answer that, we must first take a trip down memory lane.

The standards of the ’07 Games to now
At the 2007 Games, there were three events:

At the 2013 Games, we were fortunate enough to see a repeat of the very first event from 2007, fittingly titled…2007. One could not ask for a more perfect representation of how far the CrossFit athlete has come in the span of just six years. The results were night and day:

It get’s even more fascinating.

At the 2009 Games, event 6 was a 1 rep-max snatch. Let’s compare the winning scores from that event with the averages for the 2015 Regional athlete, as well as the max lifts for the winners of the 2014 Games:

Clearly, the CrossFit athlete has evolved rapidly in a short span of time. New training methods, refined diets, new pieces of equipment and the introduction of new movements have all had a tremendous impact on what is now considered as the standard of fitness.

Where athletes were once expected to move 135/95lbs with ease, those numbers have since jumped to 225/155lbs. In 2009, muscle-ups were introduced at the Games for the first time. In 2015 they are a pre-requisite for qualification to Regionals, let alone the Games. In 2013, athletes had to perform weighted pistols, deficit handstand push-ups, and for the first time ever we saw the 400lb weight barrier broken in a workout (the Cinco 1 required athletes to perform 5 deadlifts at 405/265lbs).

The loads are getting heavier, the movements are getting harder, and the athletes are getting fitter. The growth of CrossFit has also seen athletes with favorable sport backgrounds enter the fray and enjoy immediate success. Mathew Fraser spent two years as an Olympic Weightlifter training at the Olympic Academy in Colorado before finding the sport in 2012. In 2013, he qualified for Regionals, in 2014, he finished 2nd at the Games, and he’s just won the Open in 2015.

With CrossFit athletes becoming fitter and fitter, Dave Castro (Director of the Games) and the CrossFit Games programming staff are constantly looking to find new ways to expose any weaknesses and test competitors in new ways. So as athletes adapt, adjust and become fitter, what can we anticipate the standards of fitness to look like at the 2025 Games?

Fitness Standards at the 2025 Games
The 2025 Athlete
In the space of less than 10 years, the standard of athlete that is competing at the CrossFit Games has grown exponentially. This fact is highlighted by the two workouts listed above. Clearly, if the average snatch score of a Regional qualifier in 2015 is higher than the heaviest loads posted by competitors at the 2007 Games, than the CrossFit athlete is becoming fitter.

In fact, we’re already starting to see male athletes regularly break the 300lb barrier in the snatch. The winner of the snatch event at the 2014 World Weightlifting Championships in the men’s lightest division (123.3lbs and under) hit 135kgs—that’s 297.6lbs, more than double his bodyweight. Why is this important? Because it shows that humans are capable of moving such loads. So is it so hard to imagine 300lbs as the new standard in 2025?

But rather than imagine, we can use some educated guesswork to predict how strong competitors will be in 2025. Remember, from 2009 to 2015 (six years), we saw 11% and 7% increases in snatch totals in female and male athletes respectively. Say that in the next ten years, we see a 16% and 11% increase to those figures, at the very lowest.

Remember, those figures are predictions for a 2025 Regional Qualifier—not a Games competitor. But in 2015 we know that Froning’s snatch is 19% more than the average male competitor that qualified for Regionals. So if we add 19% to the average snatch of the 2025 Regional competitor, we get: 338lbs. Now, Froning is the greatest male CrossFit Games athlete in history, and currently has one of the highest snatches in the sport. But using him as a benchmark, it’s not hard to imagine that most of the men’s field at the 2025 Games would have snatches over 300lbs.

What other feats could we expect of our hypothetical 2025 Games competitor?

During the Cool Down Show of 15.4 in this year’s Open, Tommy Hackenbruck asked Dave Castro who he thought would be the first male athlete to squat 500lbs and run a 5-minute mile in the same day. While 500lbs is not an issue for a lot Games athletes, not many can break the 5-minute mile barrier. But that doesn’t mean they’re not close. So if such a feat is close to being attained in the next couple of years, it’s safe to assume that most, if not all male Games competitors will be able to perform it in 2025.

The 2025 Movements
We should also think about the type of movements we’re going to see at the future Games as well. Weighted pistols already exist, muscle-ups are a now basic standard, and at last year’s Regionals we saw strict handstand push-ups for the first time.

In the next ten years, expect to see the difficulty of those movements increase tenfold. Instead of having a weighted pistol where one kettlebell is held (as was the case in 2013), athletes will have to hold two separate kettlebells—or even a barbell overhead. Muscle-ups will have to be performed ‘strict’, and with a weight vest. Handstand push-ups will evolve into freestanding, deficit handstand push-ups. In fact, we’re already seeing athletes practice handstand walks through ‘obstacle courses’ in training. Imagine an event where an athlete has to walk on their hands 100ft, passing over low boxes and obstacles before finishing with a freestanding push-up. Double-unders will become triple-unders, and the ropes will be weighted.

We might see more influence from other sports creep into the Games, which is something Castro has been known to do. Strongman elements have played a big role in the last two Games (sled pushes, log carries, rope pulls), but we are yet to see one of the most iconic strongman tools make an appearance—the atlas stone. However, lifting the stone is already being taught in many CrossFit boxes, so it’s more than likely that it will feature at the Games sooner rather than later.

In truth, the possibilities for weights, movements and distance at the 2025 Games is endless. But the objective of the CrossFit Games—to find the Fittest on Earth—requires tests that will constantly push the boundaries of fitness. We could see more events pulled from track and field—such as the shot putt, discus, high jump or hurdles.

Water always plays a role at the Games, but what about the distance and stroke? Will that change? Maybe we will finally see a rowing event where athletes actually have to get in a boat on the water. Wouldn’t that be something?

Rope climbs seem to be getting too easy for these guys as well. Let’s increase the height of the rope, and have them hold a medicine ball between their legs. That provides a whole new element to the definition of a ‘legless’ rope climb. Muscle-ups on the ropes? (We’ve already seen at least one former Games champ do them)When will athletes be asked to run a full marathon? It’s one of the most famous athletic events in the world—surely it has a place in the CrossFit Games.

And what if the benchmarks evolved to?

One thing is for sure—to stay ahead of the fittest athletes on earth, the Games have to continue to evolve. Maybe all these predictions are plain mad, either way, it’s going to be fun to watch!