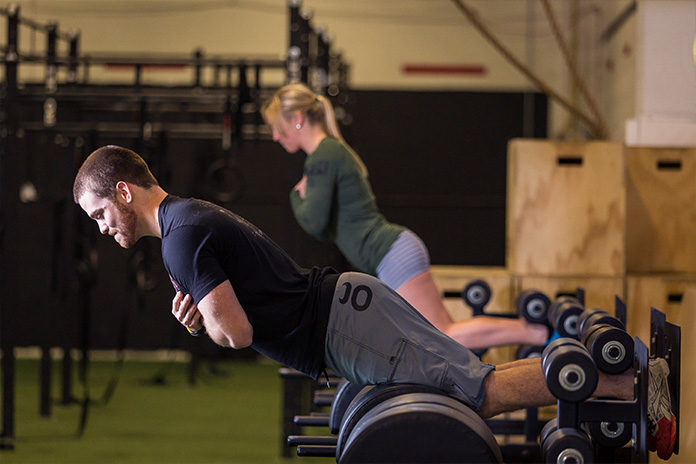 When you think about improving your leg strength, what’s the first exercise you think of?
Squats, of course, and with good reason. Yet, there are several other movements that can help build strength and power in our legs. On any given day, the movements in this list can be added as accessory exercises or as the main focus of your training. Effective movements, like the lunge, can be performed in many ways and with many different objects. For example, the overhead lunge can be performed with kettlebells/dumbbells/barbell/plate, the bodyweight lunge, the farmer’s carry lunge (holding kettlebells or dumbbells by your side), back rack lunge (with barbell on your back), and the reverse lunge.

Your leg muscles (calves, hamstrings, quads, glutes) are fully engaged when lunging, and while you may not be able to place the same amount of tension on those muscle groups as you can achieve in the squat (due to the load being much lighter), the alternating mechanics of the lunge still provides for significant strength gains. Furthermore, because lunges are a unilateral exercise (they work one limb in isolation of the other), they’re great for identifying and correcting muscular imbalances between your legs.

2. Box Step-Ups
Holding dumbbells or kettlebells by your side, over your head, or in the front rack (or using a barbell), stand up on to a box. Simple. Yet, given how basic a movement the box step-up is, they’re rarely performed. It’s a shame because it offers great leg-building potential. It’s another unilateral exercise that requires a great deal of balance and coordination, and forces adaptation throughout the entire musculature of the leg. Just try standing up to a 20-24’’ box with a moderately heavy barbell in the front rack position several times and you’ll soon discover that your glutes are on fire.

3. Glute-Ham Raise (Pictured above)
Many people use the GHD for back extensions and sit-ups. There’s nothing wrong with that of course, but since GHD stands for ‘glute-ham developer’, you know that the true intention of the device is to develop an athlete’s backside. The entire motion of a glute-ham raise targets these muscles—as well as those of the calves. When you return to the starting position, you drive your toes into the toe plate to engage your calves and generate force to help your body move upwards. The hamstrings are strengthened at both the knee and hip joint as it works its two primary functions, knee flexion and hip extension, simultaneously. This is exactly what’s happening when you perform everyday movements like running, squatting and jumping, which is why GHD raises are regularly employed by Powerlifters, Olympic weightlifters and sprinters.

4. Deadlifts
The deadlift is another movement that has many variants, including deficit deadlifts, Romanian deadlifts, snatch-grip deadlifts and more. They’re great for developing the posterior chain, which includes important muscles in the legs: the calves, hamstrings, and glutes. The deadlift is the movement that allows most athletes to shift the most weight, which means that the aforementioned muscles (as well as muscles in the core, lats, and back) are placed under a great amount of tension that forces them to grow and become stronger. With variants such as deficit deadlifts that increase the muscles’ time under tension, the deadlift is one of the most powerful options for building stronger legs. The Bulgarian split squat is a great unilateral exercise that highlights muscular imbalances between your quads, and also helps to correct them. The nature of the movement forces you to keep a vertical shin angle, placing greater emphasis on quadricep recruitment to extend the knee with each rep. The closer your front foot is to the bench or box, the greater tension is placed on the quads.

6. Sprinting
Sprinters have massive legs. It’s true that some of that muscle and power may come from the work they perform outside the track (through squats, deadlifts, and other movements on this list), but the action of sprinting itself is a potent tool for building powerful legs. Sprinting triggers the central nervous system to recruit more motor units in your leg muscles to contract more powerfully in an effort to create more force. Obviously, this has a tremendous carryover to a number of movements within CrossFit—especially the Olympic lifts. Sprinting also makes the body release more testosterone, the primary hormone responsible for the growth of muscle tissue. It also increases the size and strength of the fast-twitch muscle fibers in the muscles of the leg, and because sprinting is a form of progressive overload work (as you use the momentum of your own body mass as resistance), your muscles are naturally going to get stronger.

7. Plyometrics
Plyometric exercises strengthen the fast-twitch fibers in your muscles, increase the strength of your tendons, and significantly increase your speed and power production—particularly in the thighs and hips, important for squats, cleans, and any other movement that requires explosiveness from the lower body.

Some excellent plyometric exercises include:
Depth Jumps
This exercise uses gravity and an athlete’s weight to increase exercise intensity. Assume a standing position on a box, step or hop off, land, and immediately jump vertically, horizontally, or on to another box. Depth jumps can be performed with one or both legs. The height of the box is dependent on the athlete, the landing surface, and the goals of the program.

Squat Jumps
Stand with your feet shoulder-width apart. Squat down and jump as high as possible. Land, squat and immediately jump again.

Tuck Jumps
Stand with your feet shoulder-width apart. Explode and jump as high as you can. As you rise, pull your knees into your chest. On the way down, straighten your legs and land softly on the balls of your feet. As soon as your feet touch the ground, perform another tuck jump.