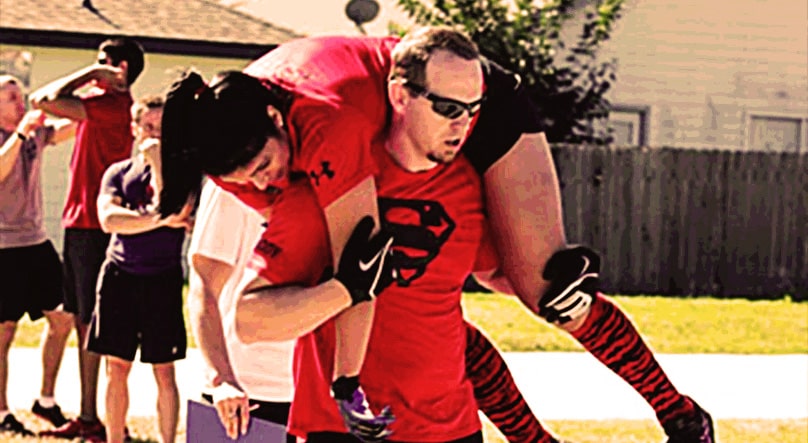 I would guess that most of you have seen the now popular overhead squat kiss: two, perfectly stable people, in the overhead squat position getting their smooch on for the iconic “I’m in love with a CrossFitter” commemoration. It’s a rather nifty idea…especially if you want an excuse to WOD, update your profile pic, and bust a move on your significant other all at the same time. But is it a good idea to mix CrossFit ‘business’ with soul-mate pleasure? In other words, will a boyfriend in the box serve as motivation or a hindrance?  Does a wife need to be next to her husband at “3, 2, 1, GO”?

A few months ago I set out to find some answers to these questions. My inspiration for this quest stemmed from my own, personal experience with having my wife slowly develop an addiction to CrossFit after I had been a “user” for quite some time – but that’s another story.

My first stop was at CrossFit Max Effort in Las Vegas, Nevada, where I met with Games athlete Zach Forrest and his wife, Lindsay. I figured their combination of being married, WODing together, coaching together and co-owning a gym would allow for a good perspective of the CrossFitting couple mentality—and they didn’t disappoint. “CrossFit is seriously the glue that binds us. We don’t really have a lot in common but we both share such a passion for CrossFit and managing Max Effort that it pulls us together. We actually met at CrossFit. She became a member at the gym I was coaching at and two weeks later we went on our first date,” says Zach. “Now she’s gung-ho about it. She knows CrossFit changes lives—it changed her life for the better. Her perspective on certain things has totally changed, which is why I think she’s so passionate. She’s a great coach, too…but we can’t coach each other (laughs). If I stay completely positive and never criticize her technique it would work – but you can’t be a good coach if you don’t point out flaws. So, although we sometimes WOD together, we’ve learned that we simply can’t coach one another.”

After leaving Nevada I decided to contact someone who might have a slightly different perspective. Although she’s technically ‘on the market’, Andrea Ager has been in the CrossFit game long enough to see the ups and downs of several relationships in the box…and, as a coach, she takes responsibility for fostering those relationships very seriously. “Many times I’ve seen couples start in the gym together and one would end up taking to CrossFit more than the other, which wouldn’t go well,” says Ager. “The one who didn’t (stick with CrossFit) would end up getting jealous of the others time there or wouldn’t understand the bond that occurs between them and different people at the gym. So, over time, it ended up breaking their relationship. So when I see a couple at an intro class I tell them that I really hope they can both find a passion for CrossFit—not just because I’ve seen couples break up when they don’t, but because I’ve seen relationships grow stronger when each person commits to this lifestyle. I think people find themselves being very proud of their (significant other) through CrossFit. It also helps people’s relationship outside of the gym as well. They’re able to get through hardships outside the box too.

I was impressed with Andrea’s insight on the matter. It was apparent that, as a coach, she has been in the “front row seat” during many relationship debacles (and triumphs). But what about the everyday, not-so-famous, CrossFitter? What insight does he/she have? It was when I began to research answers to these questions that I really started to understand the power of CrossFit. Here are just a few of the comments I got.

“Aaron and I always argued about working out and how important it was (to him)—but I never liked it. About two years ago we broke up and I was extremely depressed. I tried a membership at World Gym, working out with a friend, running and other stuff—but I always forced myself to go because I couldn’t get into it. It was around this time that my sisters paid for my CrossFit fundamentals membership and after my first class I was addicted. Soon after Aaron and I started talking again and our relationship is now stronger than ever.  Instead of arguing about working out we now have fun conversations about the WOD. He’s excited for me when I PR on a lift—he always tells me that he is proud of me!”
-Korina Martinez

“There are days when our 41 year old status reminds us we need a day off. However we realize that CrossFit is a part of our lives now. I feel it helps us work better as a husband/wife team both in the box and in the real world. I’m not going to lie…our physical relationship has reaped the benefits as well! I can’t imagine a life without CrossFit… but I also can’t imagine CrossFit without this amazing man who motivates me every day to do better.”
-Teena Dotson

Pretty cool, right? Unfortunately my investigation didn’t solely yield peaches and rainbows. Among the littered stories of how CrossFit has helped couples were stories of how our wondrous sport has contributed to duo-destruction. I even learned of several marriages that had ended in divorce because of an alluring, “available” CrossFitter. I guess booty shorts, yoga pants and shirtless hunks can raise the bar (pun intended) for an individual in a less-than-perfect relationship. One man I spoke with actually quit CrossFit to protect his marriage.

“I couldn’t help but look at the girls (sexually) and felt guilty about it. I figured it wasn’t fair to my wife and I certainly didn’t want to be around that temptation five days a week—so I quit going.”
-Anonymous

Now that’s an interesting perspective! But I had one more interview to go. My final meeting was with a very well-known Games athlete who shed some light on the issue and revealed that there may be more to this magnetism than just physical lusting. “CrossFit is good at bringing people together—people learn how to grow, commit, and be driven by others. So when you put like-minded people in one place and take away most of their clothes attraction is going to happen,” says Jenn Jones, who will be heading to her third CrossFit Games this summer. “But it’s not just physical attraction. If someone’s partner is not there or not supporting them in the way they need, something could happen…it’s nature,” she continues. “People want motivation and friendship, and if a person experiences a type of support they may have never had before it opens them up to a realization of something they’re missing in the relationship. Two people need to have a common ground and CrossFit can be that. People need someone who understands their goals…and with CrossFit that happens.”

My research proved to illuminate what we may have already known. CrossFitters comprise a community of compatible, passionate, hard-working, and (at times) half-naked people who express their common ground by WODing together and forging friendships. The negative side of is that when only one half of a 2-person team becomes a part of the community, the relationship can suffer. On the brighter side, when both parties jump on the bandwagon the relationship grows stronger.

All in all I think it’s fair to say that the enduring cliché of “The couple that plays together stays together” has a powerful truth. And lucky for us, a local ‘playground’ can be found anywhere where CrossFit is going on. But alas, every person, relationship, and situation is different and I leave it to you to decide where you stand on the issue.