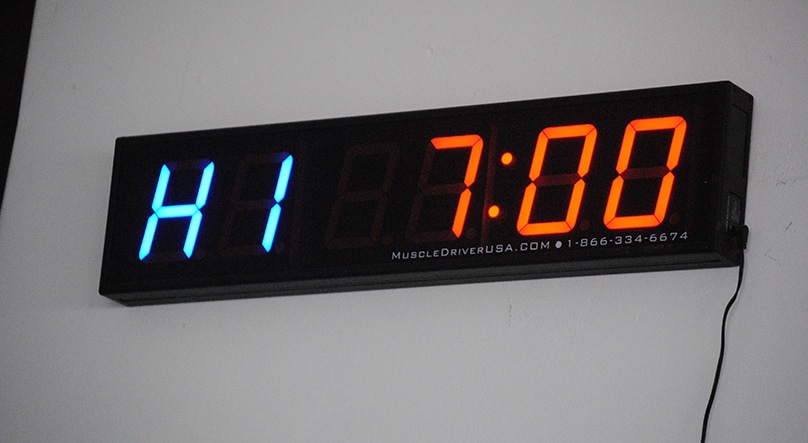 Tick. Tock. Tick. Tock. There’s something strangely captivating about a clock winding down. It can signal the start of a new year, the first day of the Olympics, the timer on a nuke that needs to be diffused in a movie (Armageddon, anyone?) or the amount of time that’s left before the WOD is done. Finished. Stealing a glance at the clock while you’re in the throws of some thrusters can set your spirits alight—or dash your hopes and dreams and send you crashing back to reality. Yes, my friends. I’m talking about the use of time caps in a CrossFit workout. People seem to have a divided opinion on them—some to love the challenge of competing against the clock, while others prefer to ensure they get all the required work done, regardless of the time it takes them.

If you’ve done the Open in any of the past years (including this one) since its inception in 2011, you should be very familiar with the concept of getting in as many rounds and reps as possible in the allotted time frame. However, these workouts are AMRAPS (as many rounds/reps as possible), and they are different from a WOD with a time cap. A time cap, on the other hand, is the maximum allotted time you have to complete the entire workout. For example, your coach might announce before the WOD that you have 20 minutes to complete 3 rounds of an 800m run, 20 T2B and 20 Wall Balls.

This just sounds different than an AMRAP, doesn’t it? It’s no longer a question of getting as many rounds in as possible, as we saw with all but one of the Open WODs this year. Now the question is: Can you actually finish the workout in time? There’s more impetus behind it than an AMRAP, more of a personal challenge to not be beaten by the clock. An AMRAP allows an athlete to be saved by the clock. A time cap challenges you to not need saving. Can you disarm the nuke in time?

Coaches use time caps as a valuable tool to ensure that athletes will be reaping the full benefits of the WOD’s true purpose. What I mean by this is that some workouts are designed to be short, quick sprints that leave very little or no time for rest. If athletes don’t have a time cap, they could theoretically take their merry old time with the workout, resting whenever they want, playing it ‘safe’ as they know that the clock will stop when they finish the workout. In such instances, the workout becomes something different than it was originally intended for. Take Fran, for example. A brutal coupling of thrusters and pull-ups for a rep scheme of 21/15/9. This is the original benchmark ‘girl’, and she is meant to be a sprint. Ideally, everyone should be able to finish Fran in less than 10 minutes. You’ll know when you’ve truly pushed yourself with this workout, because you’ll be dead on the floor, another human sacrifice to the CrossFit Gods. If you go over this time, you’re either using the wrong weight, or you’re taking too many breaks. Either way, you’ve changed the purpose of Fran, and you won’t be getting the benefits for which she was intended to provide.

Now, there is the argument that a time cap prevents a slower athlete from getting the satisfaction of finishing a workout, and removes the opportunity for people to take a much-needed rest. Bollocks. Just because a workout has a time cap doesn’t mean you can’t rest when you need to! The trick (and the purpose) to a time capped WOD is that it forces you to take shorter breaks, less often than you would in a regular workout—even an AMRAP. Often times what can prevent a slower athlete from finishing is an over-reliance on resting, as well as incorrect scaling. It might be a point of pride with some people, but there is no shame in dropping plates in order to get the desired effect of a WOD. If doing Fran with just the barbell and box pull-ups is what it takes to finish under 10 minutes and leave you gassed, than so be it. The great thing is, as you start to get faster with your current scale, you can always make it harder.

What a time-capped workout comes down to is this: urgency and intensity. These are two of the most valuable elements within a CrossFit workout. It’s hard to replicate the conditions of competition unless you are actually competing in one. Sure, you might be eager to beat your rivals and best your previous score in a regular WOD, but watching that clock counting up rather than down can often be too much of a safety net—one that needs to be ripped down. When your coach announces that the workout will have a time cap, you should take it as a personal challenge. Are you going to let this WOD beat you? Hell no. You have X amount of time to do the work. That’s it, plain and simple. So what do you do? You raise your level of intensity in the workout (as per it’s design) to ensure that you do everything within your power to not let the clock win. You move quicker than you normally would, breaking up that set of thrusters seems foolish now. Rest? What rest? It’s a simple concept, but one that is highly effective.

True, some athletes might not be ‘victorious’ sometimes. The clock may get the better of you. You may become discouraged. But it’s a war, not a battle. Keep coming to class, keep eating well, keep trying. Scale if you need to. As you gain the capacity to complete the WOD under the time cap, you’ll realize that the benefit of working with intensity is where the results really come from. And with time caps, intensity never dies.