The Floor Press vs the Bench Press 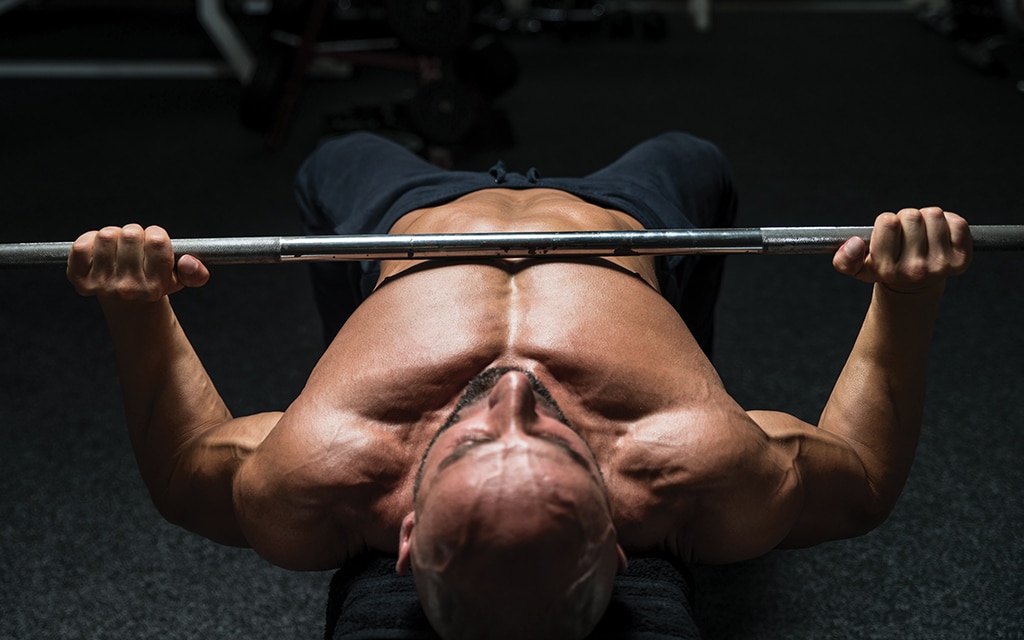 The floor press places less strain on the shoulders.
Most powerlifters have encountered some kind of shoulder pain from performing the bench press. That’s because athletes have a tendency to flare the elbows out to the side during a bench press, which places the humerus (the long bone in the arm that runs from the shoulder to the elbow) into internal rotation. To compensate, the scapula (shoulder blade) rotates up and out, forcing scapular stabilizers to work overtime while rubbing on the supraspinatus ligament. As a result, there is increased impingement in the shoulder joint. The reduced range of motion in the floor press (when compared to the bench press) results in less shearing force on the shoulder joint.

The bench press allows you to lift more weight.
Despite requiring greater range of motion, athletes are typically able to lift more weight in the bench press. This occurs primarily for two reasons. One, in the bench press athletes can utilize the (slight) impact of the bar hitting their chest as a recoil. This gives momentum to the eccentric (upwards) portion of the lift—similar to the stretch-reflex one can utilize when ‘bouncing’ out of the hole in a squat. Second, the floor press is traditionally meant to be performed with the legs flat against the ground. This removes the driving force the athlete can generate by pressing their feet into the ground, meaning that the floor press becomes a torso-dominant lift, versus the benefit of additional power generation one can achieve in the bench press.

The floor press is an excellent tricep and shoulder developer. The bench Is superior for the chest.
In the floor press, the arms rest on the ground at the bottom of the movement, thus removing tension and elastic energy from your muscles. That brief pause makes the lift a lot harder, but it’s compounded even further by the lack of help from a negated lower body drive. In terms of building explosive strength in the triceps and shoulders, this actually works out to your advantage. During the initial drive, powerful elbow extension is required in order to lock your arms out. This is one reason why many lifters supplement with the floor press in order to improve sticking points in their bench press.
The bench press targets the pectoral and back muscles more because the movement is more fluid—there’s no pause at the bottom of the lift, so you can engage your lats and chest to a greater effect. Furthermore, because the bench press is executed with a greater range of motion, your muscles are under tension for a greater amount of time. In addition, more muscles are recruited in the lift. This means that the body will secrete more testosterone and human growth hormone (HGH)—two hormones that are essential for building muscle.