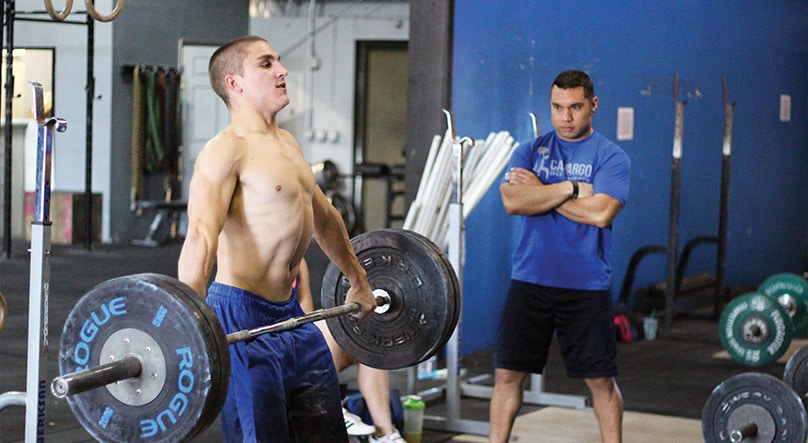 Daniel Camargo is a 24-year veteran of Olympic Weightlifting. As an athlete Camargo represented the U.S. in nine international competitions and set three American Records (Junior). Currently, he is a USAW International Level Coach and President of the Florida Weightlifting Federation. Camargo has served as Head Coach of Team USA’s Jr. Team five times and has developed 15 international Team USA competitors along with several other state and national champions. Here, Camargo takes on your top to questions.

Why can I lift more from the hang than the floor?
This is actually pretty common; so if it happens to you, know that you’re not alone. The primary reason athletes are better from the hang position than from the floor has nothing to do with strength or speed. It has to do with athletes performing a poor first pull from the ground. A poor first pull prevents you from engaging in the same positions you would achieve in the hang. Navigating around the knees is a problem for a lot of people. Hang positions, especially the higher ones, are simple—mechanically speaking. The lower you start the more mechanics needed. Starting from the floor gives us the greatest advantage because we benefit from added momentum by the time we reach full extension in the second pull. To help you lift more weight from the floor, make sure that you’re comfortable in the start position on the floor, you have a controlled start, and you find the correct positioning for the hang position as you rise up to continue the lift.

During a lift, should the bar hit my hips?
I don’t teach hitting the bar with the hips, yet all of my athletes do it—as do I. The truth is that striking the hips with the bar is advantageous. However, it should not be forced or overemphasized during the learning process. Instead, focus on the power position and its function. As you start to develop, you’ll begin to naturally make contact with your hips without ever forcing it. That will allow you to strike the bar upwards and not outwards. Attempting to strike the bar with the hips too soon will always lead to improper contact, making the bar bounce out and away from the lifter.

My front squat and back squat loads are pretty similar – is this OK?
Generally, front squat and back squat numbers should be significantly different. With a newer athlete, the spread tends to be about 20lbs. For more experienced athletes, it may go up to 50lbs. The reason someone would have a closer ratio is more than likely a core issue in the front squat or poor mobility in the shoulders. Back squats are stronger because of the support from the back. Front squats involve greater core effort to keep the bar rested on the shoulders. So is it okay? Not really. Look at strengthening your core and improving your mobility.

I can full (squat) snatch and clean when weight is light but as soon as it gets heavy, I can’t get into the full lift (squat). I can only ‘power’ it. Why?
Clearly the issue is not your ability to squat if you’re able to do so when the weight is light. That means there are only two explanations: (a) comfort/strength in the squat or (b) poor placement of the bar. Let’s take the first issue: when the load is heavy, many athletes tend to panic and simply aren’t comfortable getting into low positions. Becoming stronger in the overhead squat for the snatch or front squat for the clean will fix this proble

m. As it relates to poor bar placement, there could be something in your technique that is throwing off your balance. For example, there’s no way you can squat when the bar is traveling too far in front or behind the body.

Why do I always catch the snatch on my toes instead of flat-footed?
This can happen for a number of reasons, but it usually occurs when you shift your body towards the bar during the pull at some point. The bar should stay close to the body, and after it passes the knees, it should be swept back into the hip to extend. Athletes will often leave the bar in front of them and shift their weight towards the bar. This will make everything fall forward, even the catch. Another reason is that there are athletes who have extensive backgrounds in other sports such as dance or gymnastics, who are very “toe-heavy.” They feel stronger and more comfortable with their weight balanced on the balls of the feet, which means that when they transition to weightlifting they seem to rely on their toes more.

I bend my arms early in the snatch and the clean. Is this bad?
Not always. Arm bending is bad if at any point they straighten and bend a second time. This causes the bar to decelerate and makes you lose tension of the bar. However, if the arm bends, and stays bent without losing tension, it isn’t the worst thing that can happen.

Are there any special mobility exercises to get better at Olympic Weightlifting?
The truth is that to become mobile for Olympic lifting, you simply have to work on becoming mobile for Olympic lifting. The same mobility exercises you do for your shoulders, hips or ankles are the same ones needed to be successful at Olympic Weightlifting. There’s a ton of literature out there and I always encourage athletes to consult with a physical therapist in case there are other movement patterns or muscular imbalances that need to be identified.

Why can’t I stop swinging the bar out and away on the snatch and clean?
More than likely you’re not leading the bar correctly during the second pull. Remember, you can’t just focus on pulling hard—you also need to lead the bar. The bar needs to travel up and back in order for you to receive it, and that process occurs at the hips. Our arms are only so strong. To send the bar where we want it, think about “jumping the bar into place” and not jumping up and pulling it into place. I suggest jumping while leaning back to an appropriate extent. Focusing on high pulling will help control the bar from going out and away. This is why we practice high pulls as a drill, so we can recreate it during a lift. Just be warned, you only have a fraction of a second to perform a high pull. Thinking too long on it will slow the movement down.

Should I release the hook grip in the overhead position during the snatch?
Quick answer: it’s athlete preference. Diving deeper, I’ll say that I don’t teach the release. I prefer that athletes keep it. Why? Because it’s one less thing to think about. Learning the snatch is difficult enough and asking an athlete to time a release may add to the complexity. Also, by exaggerating the release and opening their hands athletes will lose grip strength. I feel this could be unsafe. Keeping the hook grip, even though it is no longer needed in the overhead position, secures the hands for the entirety of the lift. That said, if an athlete releases the hook naturally, I normally say nothing and allow them to get away with it.

How often should I max out?
By now we all know that beginners and intermediate practitioners hit PRs all the time. As we become more experienced, we tend to PR less frequently. This question is tough to answer so I’ll say this: it all depends on your goals. If you’re doing Olympic Weightlifting for fun or personal gain, then have at it and max out whenever you feel good; ensuring to go lighter on the days you don’t feel so hot. For competitive athletes, plan your max outs near weightlifting meets. If there are no competitions on your calendar then I normally recommend maxing out every 6-8 weeks, any time frame shorter than that and you risk burning out.