Carb Loading: What Is It and Should You Do It Before Your Next Competition? 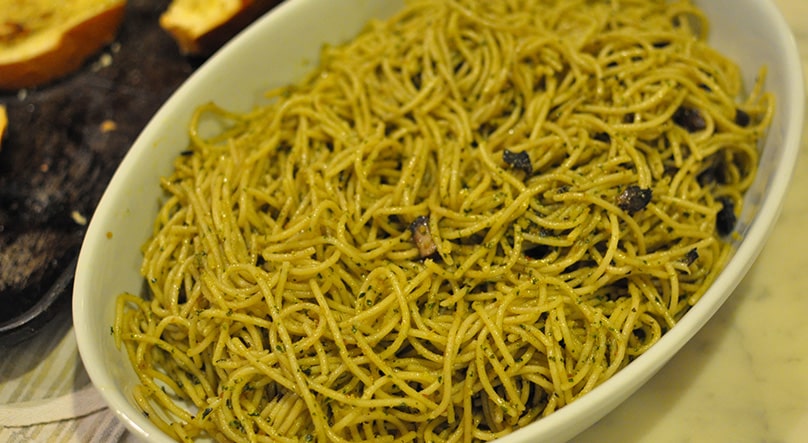 One of the main pillars for success in CrossFit is diet, and I’m sure that by now most of you have heard of the benefits of ‘doing paleo’. In an incredibly brief summary, this is a diet founded on plenty of lean meats, vegetables, fruits, seeds, nuts and good fats. We are told to keep the carbohydrates we do ingest—especially refined carbs—as low as possible as they can cause a rise in blood sugar, raise insulin and create a host of health problems and affect performance in the box. Personally, I have experienced a great improvement in CrossFit by significantly cutting down on the carbs in my diet, but there are athletes out there in other sports who need to do the opposite to improve their chances of success. Endurance athletes like triathletes, runners and swimmers need to carb-load in advance of their competitions to be able to perform at a high level for a long period of time.So this got me thinking, would carb loading be an effective strategy for a CrossFitter looking to take part in a competition? After all, having as much energy as possible for multiple workouts in the same day would certainly come in handy. But what exactly is carb-loading? How does one do it? And would it really work for a CrossFit competition?

What is carb loading, and how do you do it?
Carbohydrate loading is a strategy involving changes to nutrition that can maximize the stored amount of carbohydrates in our body, as glycogen (carbs stored in the muscles and liver), to yield more energy. Muscle glycogen is the main energy source that fuels moderate to high-intensity exercise and the depletion of glycogen stores during exercise is closely related to the onset of fatigue. The technique of carb-loading dates back to the late 1960s, when a Swedish physiologist named Gunvar Ahlborg discovered a positive relationship between the amount of glycogen in the body and endurance performance. Ahlborg developed a program for endurance athletes that involved a 3-4 day ‘depletion phase’ that involved hard training sessions on each day combined with a low carbohydrate diet. The stress of severe glycogen depletion through training and low carbohydrate intake triggers an adaptive response by which the body reduces the amount of dietary carbohydrate that it converts to fat and stores, and increases the amount of carbohydrate that it stores in the liver and muscles as glycogen. The depletion phase was then followed immediately by a 3-4 day ‘loading phase’ that involved light training and rest combined with a high carbohydrate diet. The combination of the two phases was shown to double an athlete’s glycogen stores while significantly boosting their endurance in exercise lasting longer than 90 minutes.

However, this method—particularly the depletion phase—had its share of drawbacks for athletes. Maintaining a 10 percent carbohydrate diet for three or four days (as Ahlborg’s method required) carried some nasty consequences including lethargy, cravings, irritability, lack of concentration and increased susceptibility to illness. Today the method has become a little more refined so that carbohydrate loading is more manageable for athletes, and the depletion phase was demonstrated to no longer be necessary, as athletes could increase glycogen storage significantly without first depleting it. So how does it work today?

How to carb-load
Based on updated research, athletes should perform 1-4 days of light intensity exercise in advance of a competition. A day or two before the event, the general rule of thumb is for an athlete to consume 8-10 grams of carbohydrates for roughly every 2 lbs. of their body mass. Another way to look at is adjusting your diet so that it is 70% carbs. So what foods should you fill up on to carb-load? It’s advisable to stay away from foods high in (bad) fats, such as creamy sauces, cheese, butter and oils. Tortillas, oatmeal, bread, pancakes, waffles, bagels, yogurt, rice and pasta are all easy-to-digest options.

Should you do it for a CrossFit competition?
Perhaps a more relevant question to ask ourselves first is if carb-loading actually helps to improve performance. Unfortunately, there doesn’t seem to be any scientific studies on the use of carb-loading for a CrossFit competition, but there are numerous ones that deal with it in relation to endurance-style events.  A study posted in Sports Medicine found that elevating starting muscle glycogen content “will postpone fatigue by ≈20% in endurance events lasting more than 90 minutes.” The study also suggests “there is no benefit of increasing starting muscle glycogen content on moderate-intensity running or cycling lasting 60 to 90 minutes”.  To take this a step further, a study in the International Journal of Sport Nutrition (IJSN) exclaims that though carbohydrate loading may increase endurance at a given work rate, it doesn’t improve the speed that can be maintained during high intensity exercise (greater than 70% of your V02 max) lasting 2 hours or less. In fact, starting muscle glycogen stores are more likely to influence athletic performance in more prolonged exercise. A past study in IJSN (1995) showed that muscle glycogen content after 2 hours of cycling at 70% of VO2 peak had declined far less in test athletes that were carbohydrate-loaded versus those who were not.

So hopefully I haven’t melted your brains with all of this science talk, so if you’re still with me, essentially, the benefits of carbohydrate loading only come in to play after a period of 90 minutes to 2 hours, depending on which analysis you trust more. It’s only in bouts of exercise that are longer in duration that it’ll start to kick in. And by kicking in, I mean that you won’t become fatigued as quickly as you normally would had you not been carb-loading beforehand, allowing you to maintain a high level of performance for longer before you inevitably experience a gradual decrease.

So how does this relate to a CrossFit competition? Obviously, CrossFit workouts (especially in a one-day competition, for example) test multiple modalities—not just endurance, as the studies were based off of. There is little to no research on whether carbohydrate loading has any impact on power, strength, coordination and so on. And since CrossFit workouts don’t last over an hour (usually), you wouldn’t be able to reap the benefits of a slower arrival of fatigue. Or would you? If you are required to perform 4-5 workouts in the space of one day, you’re certainly going to be breaking the 2-hour barrier for exercise. Perhaps not in one go, but certainly cumulatively. Depending on the break time in-between events, there very well may be a case to carb-load to ward off a loss of energy in a long day of competition that would certainly tax your endurance. Yes, there might be a chance that none of the events test that element, but are you really going to tell me that a day full of WODS isn’t going to test your ability to recover and endure?

However, there are negatives to carb-loading that should be taken into consideration. For every 1 gram of glycogen that is stored in the muscle, 3g of water are also stored. This means that your body mass may increase by 2-3% if you are fully carbohydrate loaded. For this reason you might feel heavier and sluggish when you start a workout, which isn’t a problem in endurance events as an athlete needs to pace themselves, but it would definitely be a problem in shorter, more explosive events—like a CrossFit workout. Carb-loading also requires an exercise taper, which may be hard for a lot of people to do, but certainly not as hard as trying not to eat everything in sight when you are trying to load up on easily digestible carbs.

Ultimately, it is up to an individual to decide if the potential benefits of carbohydrate-loading outweigh the negatives when it comes to a CrossFit competition. But now that you have the knowledge, I suppose there’s only one way to find out!