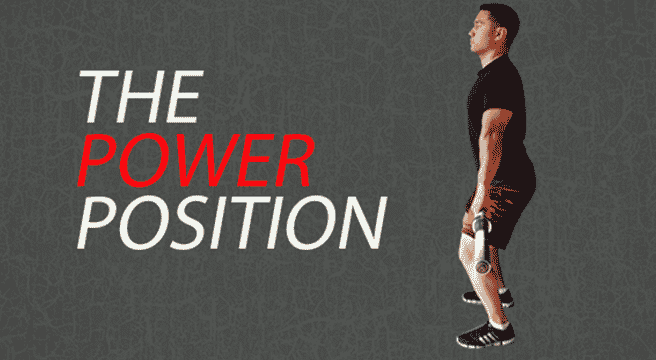 For those who have attended any of my seminars or who have trained with me, the term “Power Position” will be all too familiar. Through the execution of countless repetitions, it is ingrained in your mind and body by the end of the day’s session.

The Power Position is arguably the single most important aspect of the Snatch and the Clean & Jerk (C+J). Unfortunately, in the years I’ve spent training and now coaching, it seems this part of the movement is widely ignored by athletes and coaches, especially within the CrossFit arena.

When an athlete uses the Power Position, the difference in their performance is night and day. It alone can fix many pre-existing errors such as an early arm-pull or the feeling of the weight pulling you forward. It is the goal of this article to define the Power Position and its importance, what occurs if it is not practiced correctly and how to apply it.

What is the Power Position

The Power Position, once referred to as the “scoop” or “scooping”, is the point during the Snatch or Clean where the lifter’s torso is erect, knees slightly bent, feet flat and the bar is in contact with the top of the thighs (Illustration 1). Have you ever seen an elite lifter appear to “smack” the bar off their thighs and just catapult it overhead or to their shoulders? Well, they are. Except the “smack” isn’t the primary goal of the movement. This is why beginners should never try to directly mimic this precise act as it could cause errors in other parts of the lift. The reason the “smacking” looks the way it does is because the lifter is practicing the use of the Power Position, where the bar may make contact with the lifter, but doesn’t always have to. After learning the Power Position correctly, hopefully from day one, the lifter will develop the ability to hit the Power Position each time, maximizing his or her ability to generate the great explosion needed to execute a maximal effort lift. The “smacking” is a secondary result.

Why It’s Important?
The Power Position is important because:

During the start position, you should have been taught to begin with the barbell against the shins (Illustration 2). Failure to do so causes the bar to roll out in front of you and we all know how difficult that makes lifting weight off the ground. It’s kind of like carrying groceries in front of your body with locked arms rather than carrying them against your chest; a waste of energy and completely inefficient.

Of course, the goal isn’t for you to have bruises or scrapes on your shins from dragging the barbell against your legs as you lift off the ground. Yet, while learning to control the barbell, you may find your shins a nice shade of black and blue! The closer the barbell is to your body, the more control you’ll have maximizing the force applied during the lift. Therefore, doesn’t it make sense for the barbell to travel just as close to the body during the rest of the lift? The answer is an emphatic YES! Hitting the Power Position accomplishes this goal.

As previously stated, the Power Position puts you in the best possible position to conduct the 2nd pull, aka triple joint extension (Illustration 3). If you don’t use the Power Position, you’ll more than likely be “arm pulling”, meaning bending the arms too soon while still bent over. This pulls the bar forward. Try jumping or conducting the 2nd pull when the bar is out in front of you. Where will you and the bar end up? The answer is further in front of where you started and unable to receive it properly, instead of in a vertical position. Remember, in our definition the Power Position is when “the lifter’s torso is erect, knees slightly bent, feet flat…” Lastly, when you’re in the right position prior to the jump, the bar will end exactly where you need it: directly overhead in the Snatch or shelved right onto the shoulders in the Clean. Perfect!

Consequences If Not Used
Failure to utilize the Power Position will undoubtedly cause the following errors:

Remember, keeping the bar close to the body at all times is essential. The only way to ensure this is accomplished at the height of the thighs is with the use of the Power Position. Not using it means the bar is left out in front of your body after the 1st pull (ground to the knees). Since our arms are not as strong as our hips, legs or buttocks (dominant muscles during the Power Position), the arms alone will not be able to generate the speed and power needed to elevate the bar. The arms will try, which is why they bend too soon, but will undoubtedly fail. In turn, this will keep you from producing enough velocity to make the bar weightless long enough to receive it. Thus, the landing or receiving portion of the Snatch and Clean will be rocky, unstable and so awkward as to compromise the overall technique and likely cause a missed attempt.

Applying It To Your Technique
If you’re not already using the Power Position, hopefully, you are now convinced to do so. The most efficient way to learn is to build into it with progressions. Start with an empty bar, not a pvc pipe or dowel rod, as the bar will have just the right amount of resistance you’ll need to feel the movement.

It isn’t necessary to belabor the proper progressions in this article, which is certainly the method used in my seminars, as I would need more space and illustrations. However, in a short and concise manner, I can recommend you start with the posture associated with the Power Position (Illustration 1). From this position, with straight arms, jump the bar up from the thighs and into the receiving position. In the Snatch, if you lock out overhead simultaneously as you land on your feet, you’ll get a sense of the effectiveness of this technique (Illustration 4). In the Clean, rack the bar on the shoulders with your elbows pointing as straight forward as possible at the same time you land (Illustration 5). This will result in the same feeling. Reset and repeat several times until you feel consistent.

Keep in mind that when you lift from the ground, you must hit all the positions including the Power Position prior to initiating the “Jump” and “Receive” steps. You’ll know the very first time if you were successful. It is suggested you try several reps of slow motion execution to ensure all the positions are hit before jumping and receiving the bar. Practice your speed while hitting the positions, then gradually increase the load on the bar.

It won’t be long before the new Power Position implementation will be a normal part of your technique. The challenge will be the first time a 1RM is attempted. The impatient will undoubtedly rush the form, bend the arms, miss the Power Position, and revert back to their old ways. So, make sure you’ve added speed and load while maintaining consistency for a good period of time before attempting serious loads.

Check out this great video from Daniel Camargo on how to incorporate the Power Position when learning the Clean.