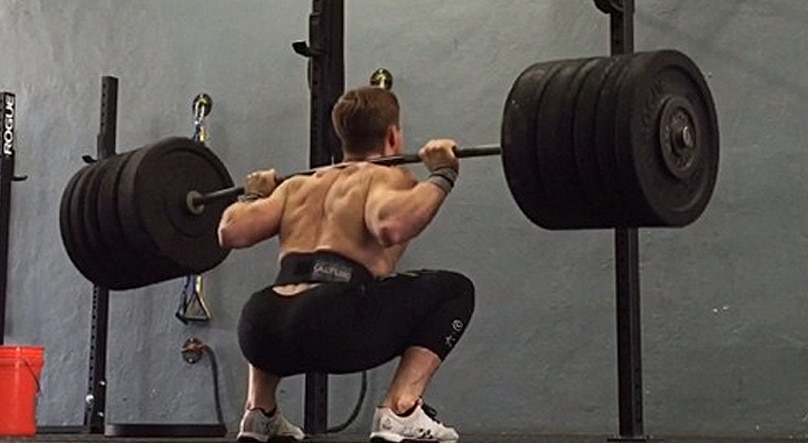 1. Deep squats help you get comfortable getting out of ‘the hole’
The ‘hole’, as it is known in weightlifting, power lifting, and Olympic lifting circles, is the lowest part of a squat—usually the receiving position for the clean and the snatch. How you handle the hole plays a large part in determining your success as a squatter—not to mention how far you can progress in the Olympic lifts. Squatting to full depth with heavy loads allows you to become comfortable with being in the hole, and learning how to drive out of it. This will help to increase your power production (as mentioned below), as well as improving your comfort level with both the clean and snatch, where you have to ‘catch’ heavy weight in a full squat (front or overhead) position. If you only train with squats that creep just below parallel, then you’re going to hit plateaus with your Olympic lifts because you simply won’t be used to holding heavy weight in deep positions.

2. The deeper the squat, the greater the power output
The PAP effect—also known as “post-activation potentiation”—refers to when an athlete “primes” the muscles in one particular exercise in order to increase muscle force production in a subsequent exercise. PAP is well documented as a technique used by athletes to increase their vertical jump and sprint times (up to 100 meters).

Because squatting deeper requires more work from the muscles—particularly those of the posterior chain (calves, hamstrings and glutes). When you squat to full depth, your muscles are stretched further and are better activated than if you were to just perform a parallel squat. With all that tension in your muscles, you can generate more power when coming out of the bottom position. Furthermore, when you squat deep, your hips take more of the load than your knees and ankles, and hip extension torque is increased. Not only does that allow you to drive out of the hole with force, but it also helps to prime your musculature and increase the PAP effect for subsequent power exercises (such as sprinting and jumping).

3. Deep squats build stronger legs
The squat is renowned as the best compound movement in the world of fitness. During the squat, the hip, knee and even the ankle joints (plantar flexion occurs at the joint when you press into the ground during the concentric phase of the squat) are all involved in the movement. As a result, your soleus (the calf), hamstrings, quadriceps, glutes, abdominals (core stability), hip adductors and erector spinae are all engaged during the back squat. Even the traps have to work to stabilize the bar as it’s racked across your back. Now, when more muscles are being worked, the body secretes more HGH (human growth hormone) and testosterone, two hormones that are vital for building muscle. In addition, the more tension that is placed on a muscle (and the more time that the muscle is placed under tension), the more muscle fiber is recruited, which increases muscular hypertrophy and strength. The problem with partial ROM squats is that while they do stretch the muscles in the legs somewhat, they could be stretched so much further. So while you may be able to lift more weight when just breaking parallel, your muscles will be getting more of a workout by going to full depth; their time under tension will be significantly increased, and more muscle fibers will be recruited to handle the load.

For further proof that full squats are best for lower body strength, consider a 2013 study from The European Journal of Applied Physiology. In the study, ‘physically active’ male students were randomly assigned to 12 weeks of progressive squat training, performed as either a deep squat or a partial squat. The full squat group gained 1.2 kg of muscle, increased lower body muscle mass by 2 percent, and increased thigh muscle cross-sectional area by 4 to 7 percent, depending on the part of the leg measured. On the other hand, the partial squat group gained no measurable muscle, but did increase the cross-sectional area of the thigh slightly.

4. Deep squats increase stability in the lower back
As I mentioned, squats are a true compound movement, targeting multiple muscles in the body. This includes the erector spinae, rectus femoris and other paraspinal muscles in the lower back. Building strength in these muscles in conjunction with the glutes produces improved structural balance, better posture and even reduces hamstring injuries in runners.

5. Deep squats improve your flexibility
As I mentioned above, when you squat with a full range of motion, your muscles are fully stretched. Because a lot of people have poor flexibility in their hips, hamstrings and ankles, getting into an ‘ass-to-grass’ position is a challenge in itself. As a result, they’ll stick to quarter or parallel squats, and keep stacking weight on the bar without ever trying to squat to full depth with lighter weight. But in such situations, it’s important to check your ego and recognize the value in stripping the barbell of some of that weight (or all of it!), working on your mobility and performing squats to depth. Do enough deep squats, and you’ll be surprised at how much your ankle, hip and even wrist and shoulder (in the case of front/overhead squats) increases.

As world-renowned strength coach Charles Poliquin states, “Not only do full squats keep you honest and encourage you to achieve functional mobility, they allow you to train for better structural balance throughout the body.”

So while you may think that squatting to quarter or partial depth won’t cause an injury, consider that if you keep squatting this way, then over time you will develop muscular imbalances in the hips and knees, increasing the risk of injury and pain. Don’t take that risk. Deep squats are a natural human movement (we come out of the womb squatting deep) that “allow for a balanced development of the hip and lower back musculature while encouraging peak dynamic mobility.”

6. Full squats build bone and are safer for the spine
You can’t squat as much weight when you hit full range of motion versus partial squats. This is important because lighter loads place far less strain on the spine. Yes, technique is obviously important regardless of how deep you’re squatting, but squatting mammoth amounts of weight in a partial squat is not worth the amount of unnecessary compressive force placed on the spine. In such instances, the musculature in your back becomes the performance-limiting factor—not the legs.

However, when you do load the spine with manageable weight and squat to full depth, you’re helping to build bone mineral density—vital for protection against fractures and osteoporosis.

7. Full squats are better for knee health
It might seem counter-intuitive, but the deeper you go in a squat, the increased knee stability you’ll experience. This is because there is increased contact between the back of the thigh and the calf, reducing the shearing forces on the ligaments within the knee. In fact, a 2013 study from Sports Medicine found that the highest compressive forces are placed on the knee when it is at a 90-degree flexion angle. Essentially, allowing the knee to move freely in a full range of motion helps to build tissue strength around the knee joint—not to mention decreasing the amount of stress (and therefore reducing the risk of injury) on the knee itself.

Is there any value to squatting just below parallel?
Partial squats allow for heavier loads to be lifted in a specific portion of the lift. For example, if you are training with full squats and have difficulty getting past a particular sticking point that is close to parallel, training with heavier weights at parallel can help to boost your strength in that part of the lift.

Now, many athletes will, at first, struggle with squatting to full depth. The limitations in their mobility will mean that they can only just break parallel—and that’s ok. You can still get plenty of benefits from squatting this way. In addition, if an athlete’s form is so poor that squatting to full depth would increase the likelihood of injury, they need to spend time learning how to go through a full range of motion in the squat using a PVC pipe or just their bodyweight.